These are the saddest of possible words:

“Messi to Suarez to Neymar.”

Trio of bear cubs, and fleeter than birds,

Messi and Suarez and Neymar.

Matching a Bayern goal with their very own double –

Words that are heavy with nothing but trouble:

“Messi to Suarez to Neymar.”

-A modified version of “Baseball’s Sad Lexicon” by Franklin Pierce Adams, written in 1910. 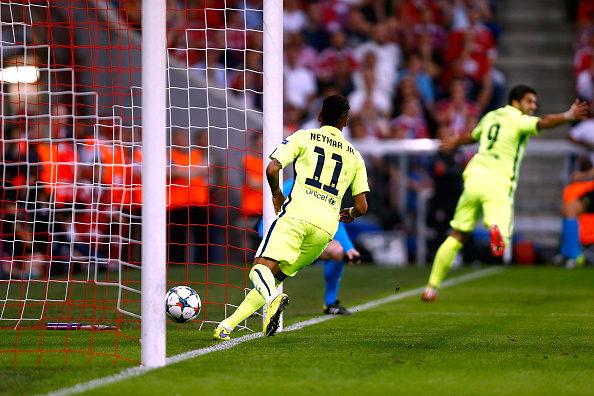 Barcelona’s attacking trio just isn’t fair. Bayern Munich’s chances were slim today, needing to score at least four goals today in order to advance to the Champions League final. The game ended with Bayern still searching for three. Fans filed out of the stadium in sadness, proud of their team’s effort, but a distinct muttering of “Messi to Suarez to Neymar” could be heard throughout the German city.

Bayern Munich started this game like a team possessed, dominating possession, pressing on defense, and pumping the ball in the box. All looked according to plan with an early goal from a powerful Medhi Benatia header.

A quick sequence of South American passes: Messi to Suarez to Neymar. Suddenly, fifteen minutes in, the game was over. Neuer was off his line, and Neymar simply tapped the ball into the back of the net in classic Barcelona fashion. A silence fell over the Munich crowd. This was certainly the “all is lost” moment for Bayern Munich’s hopes of Champions League glory.

Bayern pressed on though. Thomas Müller forced an excellent save from Barca keeper ter Stegen just a few minutes later; Lewandowski nearly eked out another from close range in the 27th minute; and a brilliant Thiago run led to another near miss in the 29th.

Then came that old refrain: Messi to Suarez to Neymar. Messi sent Luis Suarez long on the break, Suarez crossed to a wide open Neymar, and Neymar then beat Neuer at the near post. Game over. Again.

The second half started incredibly slowly. Barcelona buckled down at the back and in midfield. Bayern sprayed passes all over the field. Neymar started looking for fouls. And Bayern started launching shots from forty yards out.

For the second half, Barcelona looked content to take their foot off the pedal and defend. Bayern broke down the Bayern back line often, but not often enough. Bayern’s moment came when Robert Lewandowski finally broke through with a nifty moment of fancy footwork and one-on-one attacking in the 60th minute. The crowd came back to life, and life returned to the game at that point. Bayern dominated the next fifteen minutes, with Müller cracking another home in the 74th minute. But it just wasn’t enough. Barcelona’s defense did just enough to slow down the game, and Bayern’s attacking players just didn’t have enough to mount a challenge to the immense deficit.

Even though Bayern won this leg, Neuer was not the best German goalkeeper in the game. Ter Stegen made several brilliant saves, especially the reaction save following by the swat off the line in the 40th minute. Had any of those first half goals gone in, then momentum could have stayed with Bayern after the early goal and who knows what may have happened.

Barcelona advance to the Champions League Final where they will face the winner of tomorrow’s second leg between Juventus and Real Madrid. After their performance against Bayern Munich (and even though Bayern were shorthanded), it’s hard to imagine a final where Barcelona aren’t heavily favored.

Man of the Match: Messi, Suarez, and Neymar. There can be no quest to the football genius each of these three possess. With their attacking class, it was clear from early on who would take this game, especially with the absences of Franck Ribery and Arjen Robben.