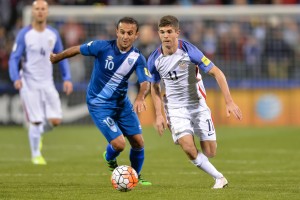 The Copa America Centenario is almost upon us, and, as with every tournament, players will be hoping to make their big break on the international stage. Here are the five players who may be set for a big tournament.

The player that could very well get all of the headlines during the Copa America Centenario. Already making a big splash in the friendlies for the United States with his well taken goal against Bolivia and his exciting play, as well as in the Bundesliga with his club, Borussia Dortmund, Pulisic will be hoping to gain valuable experience, and maybe a starting spot, during the Copa America Centenario. Definitely a player to keep your eye on as he continues to develop. 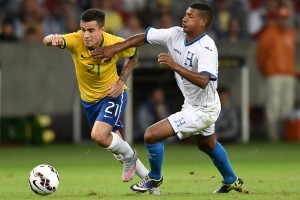 PORTO ALEGRE, BRAZIL – JUNE 10: Phillipe Coutinho (C) of Brazil and Bryan Acosta of Honduras compete for the ball during the International Friendly Match between Brazil and Honduras at Beira Rio Stadium on June 10, 2015 in Porto Alegre, Brazil. (Photo by Buda Mendes/Getty Images)

Coutinho may not be an unheard of player to many people out there. In fact, I would be a little shocked if most soccer fans hadn’t heard of him. He has the potential to be one of world soccer’s big players in a few years. That being said, he has a somewhat strange relationship with the Brazilian National Team. Regardless of the form he has been in with his club, Liverpool, Coutinho is often left out of the squad. To be fair, there is a lot of competition for his spot, but the Copa America Centenario could, and should, be where he finally nails down his spot in the team. He is one of the leading lights at Liverpool, and he should be able to carry over that form to his national team. 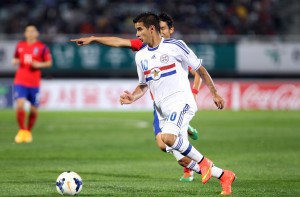 The young Paraguayan winger who currently plies his trade at Dynamo Kyiv is set to make a big splash in world soccer. Look at it this way. He’s only 22 and looks ready to become one of the primary attacking threats for his country. This year, he also picked up Champions League experience, grabbing a goal and two assists. He also snagged two goals in fourteen total appearances in the Ukrainian Premier League. Not too shabby for a 22 year old winger playing in a war-torn, but surprisingly difficult league. If he performs well, he is the one player that we can expect to be the center of a big money move post-Copa. 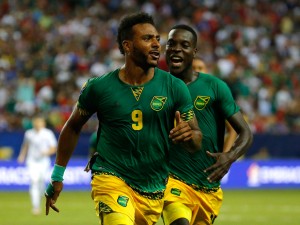 ATLANTA, GA – JULY 22: Giles Barnes #9 of Jamaica celebrates scoring the second goal against the United States of America with Je-Vaughn Watson #15 during the 2015 CONCACAF Golf Cup Semifinal match between Jamaica and the United States at Georgia Dome on July 22, 2015 in Atlanta, Georgia. (Photo by Kevin C. Cox/Getty Images)

Many people consider Jamaica to be the dark horse team for the Copa America Centenario. Between an easier group, compared to the other stacked groups, and a surprising amount of talent, Jamaica could very well go far in this tournament. If Jamaica are going to fulfill those ambitions, much of it will be on the back of Barnes. Their tournament may be in good hands, though, with Barnes coming into form with his club, MLS’s Houston Dynamo, who he has scored or assisted with every other game this season. 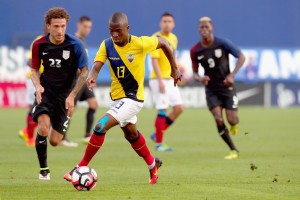 FRISCO, TX – MAY 25: Enner Valencia #13 of Ecuador controls the ball against Fabian Johnson #23 of the United States in the first half during an International Friendly match at Toyota Stadium on May 25, 2016 in Frisco, Texas. (Photo by Tom Pennington/Getty Images)

Enner Valencia is one of the bigger question marks on this list. He has had a solid, but injury-staggered, season at West Ham, where he helped the Hammers reach Europe and become one of the shock teams in the league. As one of the first names off the bench, if not a regular starter, Valencia was an important attacking option for West Ham on either the wing or centrally. In the Copa America Centenario, he will be relied on as the go-to threat. Can he handle the pressure? If he can, he’s in for a big tournament this year, as Ecuador will look to upset Brazil to win their group.

So what are your thoughts? Did we miss anybody? The Americas are so filled with great emerging talent that we are bound to have left some people on the list. Be sure to check us out on Facebook and Twitter, and tell us who you think is set for a big Copa America Centenario.