This weekend saw a 1-1 draw between Manchester United and Stoke City, after a late Joe Allen goal leveled the scoring. Shortly after that, Paul Pogba did this while attacking a late corner.

At first, we are unable to make out exactly what happened, since the camera isn’t focused on the incident. All we see is the Stoke players approaching the referee, Robert Madley, before Madley calls both Pogba and Allen over. Okay, so Madley must have seen something, but it had to have been something both players did since he is calling them both over. 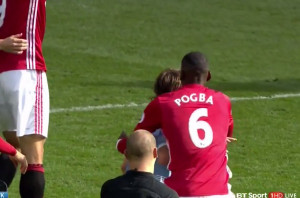 Pogba grapples Joe Allen around the neck during the Manchester United-Stoke draw this weekend.

And then you see the replay of the event. Joe Allen has his arm up against Paul Pogba, who promptly grabs Allen around the neck, swings him, and throws him to the ground. Clearly, this is a case of violent conduct. Not only is there the potential to hurt someone, it’s completely uncalled for in terms of the acceptable measures for a ‘contact sport.’ The technical term for this is excessive force.

In soccer, there are three levels of ‘force’ that are punishable by the referee. These are careless, reckless, and using excessive force. Careless is defined as “the player has shown a lack of attention or consideration when making his challenge” (Fifa, Law 12 – Fouls and Misconduct (Part 1 – Fouls), pg. 8). A referee may decide to warn a player, but take it no futher than that. Reckless, on the other hand, is when the players has “acted with complete disregard of the danger to, or consequences for, his opponent.” (pg. 8) In this case, it’s a guaranteed yellow at the very least. Finally, excessive force is defined as having “far exceeded the necessary use of force and is in danger of injuring his opponent.” (pg. 8) 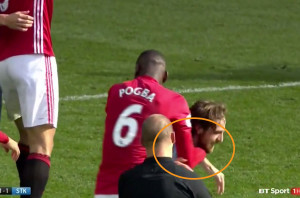 Pogba grapples Joe Allen around the neck during the Manchester United-Stoke draw this weekend.

Here is where we get into definitions and what levels of punishment should be handed out. We can write off careless immediately. There is no lack of attention or consideration in Pogba’s actions. This was a considered action. So it’s between Reckless and Excessive. The reason why we need to consider this excessive is the fact that the shove “far exceeded the necessary use of force” needed for a corner kick. If it had been jockeying, that’s one thing. Pogba grabbed another player around the neck and threw him down. With that, by law, it should have been a red card. 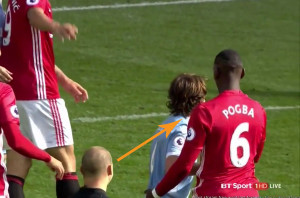 Even if you want to argue that it was reckless, instead of excessive, at least Pogba got a yellow for it, right? Nope. In this case, Pogba didn’t get anything for the bookable offense. Maybe Madley didn’t see the foul? Well, we can’t say that either, because he called them both over. That, and he was looking right at them while it happened. Some have argued that the reason that nothing was given to Pogba was because the ball wasn’t ‘in play.’ This assumption is incorrect, though, because according to FIFA “the referee has the authority to take disciplinary sanction from the moment he enters the field of play until he leaves the field of play after the final whistle” (Laws of the Game, pg. 39). That includes before kickoff and after the final whistle before the referee leaves the field. Bookings after the game is over is certainly not unheard of, though rare. So in this case, the precedent to book Pogba was set, and Madley not only could have, he should have booked the world’s most expensive player.

Well, at least the FA can go back and punish Pogba with some sort of ban. This kind of violent conduct can’t be allowed for obvious reasons. As we all know by this point, that is not a possibility either. Since Madley saw the action and addressed it on the field, the FA cannot retroactively punish Pogba for violent conduct. Here we come to the crux of the issue. In this game, Madley made a mistake. By the law of the game, Pogba should have received a red card. The FA need to change their own rules so that if something like this happens, they have the power to step in, with the benefit of hindsight, and correct the mistake. They also need to allow referees the opportunity to explain their decisions, either in the form of postgame interviews or in written explanations. Fans deserve the explanations, and referees deserve the chance to defend themselves. It is time for a change with the way referees are handled, holding them accountable, or else the standard of officiating will never get better.