After Arsenal’s humiliating defeat away to Bayern Munich, Alexis Sanchez looked terribly distraught as he has been for a while. The Chilean has been with the North London side since 2014. He hasn’t had the kind of success he was hoping from since coming over from Barcelona. Now with Arsenal on the verge of another round of 16 exit, rumors have begun to pop up that Sanchez might be looking for an exit.

Arsenal fans would be devastated, but his fellow countrymen are planning a march, in hopes of convincing the Gunners superstar to take his talents out of London. Sanchez still has one more year on his contract, but if an extension isn’t in place by the summer, it’s likely that he’ll be sold. Arsenal wouldn’t dare lose their best player for nothing.

Whether or not Sanchez leaves this summer is up to him. Arsenal will dangle plenty of money in front of their star player, but whether or not he’s will to remain in London is up to him. If Sanchez has had enough with Arsenal, the question becomes, where does he go? There will be not shortage or suitors, were he to hit the transfer market. The biggest clubs in Europe will come calling, so too will China, but where would Sanchez be most at home? Well, let’s look at a few options. 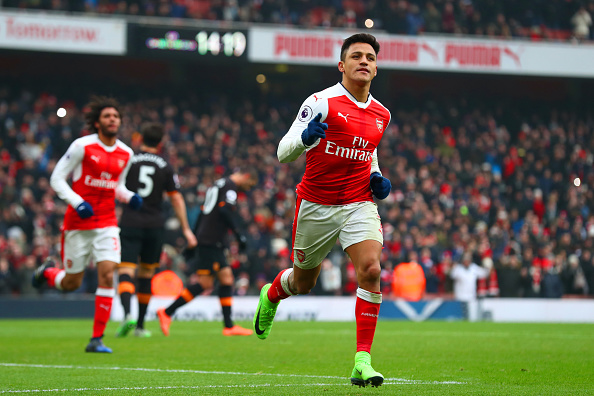 LONDON, ENGLAND – FEBRUARY 11: Alexis Sanchez of Arsenal celebrates scoring his side’s second goal from the penalty spot during the Premier League match between Arsenal and Hull City at Emirates Stadium on February 11, 2017 in London, England. (Photo by Clive Rose/Getty Images)

Juventus seems like it would be an obvious choice. Financially they could make it work, and Sanchez is already familiar with the Serie A. Before heading to Barcelona, he was a star for Udinese. Juventus wouldn’t be a culture shock. The addition of Sanchez would also make Juventus a force domestically and in Europe. The club has already steamrolled through Serie A the past few years, adding someone as dynamic as Sanchez would cement their position as the best in Italy.

Sanchez has only won a league title once in his career, that came with Barcelona in 2013. It’s hard to imagine Sanchez not being able to add to his collection of Silverware with The Old Lady. An attacking group with the Chile international, Gonzalo Higuaín, Juan Cuadrado, and Miralem Pjanić would almost be unfair. Juventus are starting to become a side to be reckoned with in the Champions League, adding someone like Sanchez could take them to the next level.

The reigning French champions haven’t been quite the same since losing Zlatan Ibrahimovic this summer. They’ve lacked the confidence of a superstar leading their attack. Fortunately, they have more than enough cash to make a big signing this summer. Plenty of rumors has them making a hard push for Sanchez if he hits the market. PSG are something of a new power in the European game, but after humiliating Barcelona 4-0, they’ve become a legitimate Champions League contender. 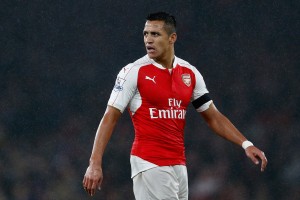 LONDON, ENGLAND – OCTOBER 24: Alexis Sanchez of Arsenal looks on during the Barclays Premier League match between Arsenal and Everton at Emirates Stadium on October 24, 2015 in London, England. (Photo by Dean Mouhtaropoulos/Getty Images)

Sanchez would make PSG better. Granted, he would make anyone better, but the French side is going all in with some of the games’ most talented attackers. Sanchez would get to line up with Edinson Cavani, Julian Draxler, Angel Di Maria and Marco Verratti. The latter ran the PSG midfield and made Barcelona look like a Sunday league team last week. Going to PSG would certainly give Sanchez a better chance at the Champions League than his current home. The crucial thing with PSG, however, is that Sanchez should have no difficulty landing the salary he wants in the French capital.

Real Madrid and Barcelona seem less likely to be an option for Sanchez. Barcelona has no room for him as it is, with their deadly front three already on the books. Madrid could use him as a striker if they wanted. Sanchez would be a slight upgrade over Karim Benzema. But with Real, they sometimes buy players for the sake of buying players, so there is no predicting Florentina Perez.

There are a number of teams in England with the finances to pry Sanchez away from Arsenal. Not only they, but those clubs would love a chance to weaken the opposition. If Manchester United aren’t able to buy someone like Griezmann, Sanchez would be a terrific plan B. Recently, Chelsea and Manchester City have had questions raised about the future of their star forwards, Diego Costa and Sergio Aguero. Were either player to leave this summer, Sanchez could be a natural replacement.

Finally, Sanchez might be tempted to join the very team who helped bring about his misery. Bayern Munich would love to have a player on their squad like Sanchez. It’s not a stretch to fit him in that team either. With Frank Ribery getting up in years, and Kingsley Coman still struggling to learn the ropes in Germany, Sanchez would smoothly slot into that wide position. Couple that with the fact that fellow Chile international Arturo Vidal already plays in Munich and Sanchez could easily be tempted to join his compatriot.

Arsenal still has time to get a deal done with Alexis Sanchez, and signing him to an extension could signal to other big name players that despite recent struggles Arsenal is still committed to winning. It’s now up to Sanchez to decide if he has the heart for another season of potential disappointment, or if it’s time to search for greener pastures.