Last weekend, Leicester overcame the sacking of their Premier League-winning manager, Claudio Ranieri, with a decisive 3-1 win over Liverpool. In the match, they seemed to exorcise many of the demons that have plagued them, scoring their first, second and third goals of 2017. Does this bode well for the Premier League defending champs, and is it proof that recovery is on its way?

The single greatest bit of evidence that Leicester are recovering is that they finally started scoring goals. Jamie Vardy had a party in a BIG way. The importance of goals to Leicester’s game cannot be overstated. This is especially true when you consider their defense is nowhere near as good as last season. Beyond that, they also bullied Liverpool’s midfield. Keep in mind, Liverpool’s midfield just bullied Spurs in their last game. That’s quite a feat for a team hovering above the relegation zone. 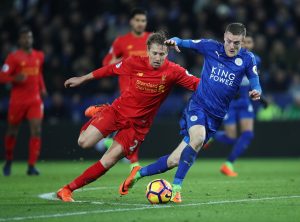 LEICESTER, ENGLAND – FEBRUARY 27: Lucas of Liverpool battles for the ball with Jamie Vardy of Leicester during the Premier League match between Leicester City and Liverpool at The King Power Stadium on February 27, 2017 in Leicester, England. (Photo by Julian Finney/Getty Images)

That said, it’s not all positives for the Foxes. It needs to be said that Jurgen Klopp’s men tactically played right into their hands. This is the exact style that Leicester thrive against. High pressing, high back line, all while playing a little recklessly with the ball. This style works most of the time, but Leicester are set up to perfectly to play against this style. To make matters worse for Liverpool, Vardy targeted Lucas Leiva, who is not a defender by trade, isn’t the fastest and poor on the turn. Again, another situation that played right into Leicester’s strengths.

The other big factor in this game was that Liverpool lacked Jordan Henderson. At this stage, it is undeniable that Henderson is the most important part of Liverpool’s midfield. With him, they have a 61.5% win record and a 15% loss record. There are other factors as to why that stat is so poor, but it highlights the captain’s importance to this team. Ultimately, this game was down to Liverpool’s abysmal performance, more than anything.

So the question remains. Is this the start of a renaissance for Leicester? At this stage, I’m going to say no. Based on current evidence, this has the look of a false dawn. Much like how many reacted after their trouncing of Manchester City, this win has more to do with the opposing team recklessly playing to Leicester’s strengths. There were no major tactical changes and the players didn’t look that much better or more motivated (except for a few choice moments). You would have to say that once they come up against a better defense, we’ll see that they haven’t suddenly clicked. The points they grabbed may have been vital to survival, but we’ll see how they do against their relegation rivals, not those battling for Europe.