Raheem Sterling’s goal in the 71st minute got Manchester City three vital points in a 2-1 win against Arsenal. The legitimacy of this goal has been questioned over and over again this week, and, though it was declared onside during the game as well as in review, the debate still rages on. Check it out below:

So, you may ask how exactly that could be offside. I mean, Sterling received the ball in an onside position and finished it himself. The problem arises with an oft forgotten rule that is still fairly new. Rewatch the goal and keep an eye on David Silva, who runs towards the keeper as the ball is struck. That is where the contention arises. See, the rule has arisen that a player who is in an offside position cannot affect the play or else it will be declared offside. Did David Silva affect the play? 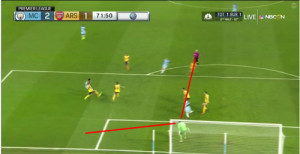 Let’s first look at the argument for the goal being onside. In terms of what is considered offside and interfering with the play, we can clearly see that the player is in an offside position as the ball leaves Raheem Sterling’s foot. The question is whether or not he is interfering with the play. As we look at players’ placements on the field, David Silva is still fairly far away from the action. We also added some rudimentary field of vision lines to give you an idea of what Petr Cech could have seen. As Raheem Sterling shoots, Silva is just outside of Cech’s view. Okay, so conclusively, the goal should stand, right? 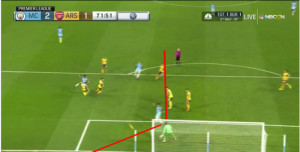 David Silva’s location as the ball neared Petr Cech during the Premier League match between Manchester City and Arsenal (December 18,2016)

Not necessarily. Here is the players’ placement as the ball neared Cech. Not only is Silva in Cech’s field of vision, he’s directly in front of Cech. Not only that, Silva is lunging towards the ball, in effect making an active play for the ball. While he doesn’t actually touch the ball, he is close to the play and near enough to Cech that he would have drawn Cech’s vision (even in this fairly shallow field of vision that we have drawn here). While Cech still dives for the ball, it would be disingenuous to say that Silva wasn’t involved in the play.

The problem here is that there is a lack of clarity with the offside ruling that allows for things like this to stand. According to FIFA’s rules on the matter, “active involvement…is the offence.” Active involvement is then defined as a player interfering with play, interfering with an opponent or gaining advantage by being in an offside position. Having looked at the play, I believe that Manchester City gained an advantage by having Silva where he was. That’s only what I believe, though, because ultimately, the goal stood. 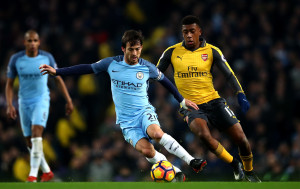 MANCHESTER, ENGLAND – DECEMBER 18: David Silva of Manchester City (L) is put under pressure from Alex Iwobi of Arsenal (R) during the Premier League match between Manchester City and Arsenal at the Etihad Stadium on December 18, 2016 in Manchester, England. (Photo by Clive Brunskill/Getty Images)

The issue is the vagueness of the rule. While you can argue that Silva interfered with the play in the second picture, you can argue that he didn’t based on the first picture. So when is interference judged: When the ball leaves the foot of the player or at any time during the flight of the ball? For that matter, what do we consider interference? Is Silva being in the vicinity of Cech enough to be considered interference, should the lunge have been considered interference or did he need to actually touch the ball? The rule is still fairly new, but these are legitimate issues that cause confusion like this. To further obscure the issue, if this goal had been checked off for offside, City fans could have pointed to the multitudes of other times when goals like this have been given because people don’t know quite what to make of it. When there is this level of uncertainty about a rule, what good is it? Without a doubt, this needs to be sorted, one way or the other.