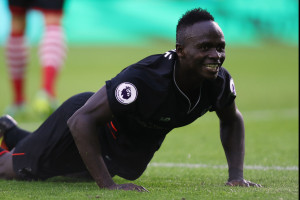 SOUTHAMPTON, ENGLAND – NOVEMBER 19: Sadio Mane of Liverpool looks on during the Premier League match between Southampton and Liverpool at St Mary’s Stadium on November 19, 2016 in Southampton, England. (Photo by Bryn Lennon/Getty Images)

This past weekend, Liverpool dominated Southampton. With 65% of the possession and 15 total shots, Liverpool pressed against Southampton in a way that lead former Bayern Munich midfielder Pierre-Emile Højbjerg to declare that Liverpool was the best he has ever faced. And yet, despite all of that, the score ended 0-0 and the two teams shared points. Considering this isn’t the first time something like this has happened to Liverpool this season, we have to wonder: is this the best tactic when taking on Liverpool?

Well, there are a few reasons why ‘parking the bus,’ as it is often called, could work. First, by giving Liverpool the ball and inviting them to attack you, you avoid dealing with the deadly gengenpress. This allows your team to maintain it’s shape and not be caught out when the inevitable press hits you. 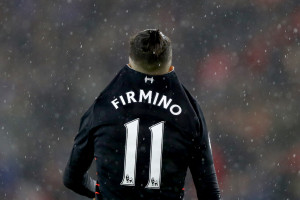 SOUTHAMPTON, ENGLAND – NOVEMBER 19: Roberto Firmino of Liverpool reacts to the final whistle during the Premier League match between Southampton and Liverpool at St Mary’s Stadium on November 19, 2016 in Southampton, England.

Sitting back also attempts to blunt the incredibly potent attack that Liverpool has. Between Philippe Coutinho, Roberto Firmino, Sadio Mane, and Adam Lallana, to name only a few, Liverpool have so many attacking outlets that it is tough to contain them all. By effectively shutting up shop, you can give yourself the best chance of stopping all of these options.

Finally, when you do stop Liverpool’s attack, packing your team with defenders and a few pacey players up top give you the perfect chance for a counter attack. This is pretty much exactly what Burnley did and, to date, they are the only team that has defeated Liverpool in the league. Parking the bus does seem to be an especially effective way of countering Liverpool. Sunderland and David Moyes hopes this strategy works this weekend because Moyes has already said he plans to park a double-decker bus in hopes of a draw.

That is, if you only look at the surface of this strategy. The biggest downfall against this system it that, by effectively surrendering the ball against Liverpool, you give them even more chances to score a goal. For a team as offensively-strong as Liverpool, this can be deadly. This is especially true if the opposing manager goes all-in on parking the bus. If Liverpool scores early because your team was giving them too much of the ball, they could be in trouble. The team is only set up to defend and now has to try to get a goal back. 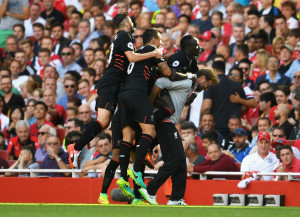 LONDON, ENGLAND – AUGUST 14: Sadio Mane of Liverpool and team mates celebrate his goal with Jurgen Klopp, Manager of Liverpool during the Premier League match between Arsenal and Liverpool at Emirates Stadium on August 14, 2016 in London, England. (Photo by Mike Hewitt/Getty Images)

You may point to that Burnley game as an example where it has worked, but that is genuinely the only time that parking the bus against Liverpool has resulted in three points. Since then, the best that it has managed is a draw in the games against Manchester United and Southampton. Mind you, these are both strong teams that could have tried to go toe-to-toe with Liverpool. They may have lost, but a win was also very possible. For a team without those resources, this strategy has been disastrous in the past. All one needs to do is look at Liverpool’s games against Watford (6-1, Liverpool had 60% possession and 30 shots), Hull City (5-1, 74% possession, and 33 shots), Leicester (4-1, 62% possession, and 17 shots), and West Brom (2-1, 68% possession, and 21 shots). The scorelines may vary, but the evidence is clear. This strategy can lead to devastating outcomes when Liverpool’s attack clicks.

Ultimately, that is the real reason why this parking the bus strategy has worked against Liverpool. Simply put, their attack wasn’t clicking that day. Want proof? In the Burnley game, Liverpool had 80% possession and 26 shots. Looks like complete domination, yet Liverpool lost 2-0. The massive difference is that Liverpool only had five shots on target. In the Manchester United game, they only had three shots on target out of nine total. Finally, in the Southampton game, Liverpool’s attack only notched up two shots on target, with 15 shots total. Compare this to the Watford game, where Liverpool managed 17 shots on target. It becomes pretty clear that the quality of shot was simply down in those games. 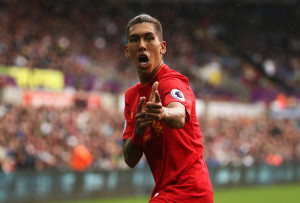 While it may seem tempting to play against Liverpool with an uber-defensive strategy, when you look at it statistically and tactically, it really becomes a game of Russian Roulette, instead of the game of chess that it was assumed to be. Parking the bus may have theoretically worked in three of the four times that Liverpool have failed to take all three points this season, but the deciding factor turns out to be less to do with the defensive style that the opposing team takes and more of how “on” Liverpool’s attack is. Considering they have already scored 40 goals in all competitions this season, it would appear that they are “on” more often than not.