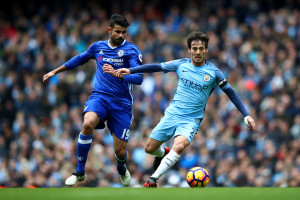 Manchester City manager Pep Guardiola has admitted that his team are out of the Premier League title race following their heavy 4-0 loss to Everton over the weekend. This loss leaves them 10 points behind league leaders Chelsea, and outside of the top four. With 17 games left in the season, catching up to Chelsea would be difficult, but was Pep correct in saying that Manchester City are no longer capable of winning? And if so, what does he stand to gain by admitting that?

First of all, can Manchester City still possibly win the Premier League? Well, yes, of course they still can. They would just need to pick up 11 points where their opponents fail to do. Honestly, though, that is 6 draws, if every team above them goes unbeaten throughout the rest of the season, it’s still very mathematically possible. Another point worth mentioning is the overall quality of Manchester City’s players. They have an incredible manager in Pep Guardiola and an incredible squad with players like Sergio Aguero, David Silva and Kevin De Bruyne, to name only a few. They also have one of the deepest squads, with at least two quality players for each spot on the field. The tools are there to put together a run that leads to the top of the table. We also cannot ignore Chelsea’s winning streak from earlier in the season. There is no reason to believe that if Chelsea can achieve it, Manchester City could do it too. Finally. For a more recent example, many considered Spurs to be out of the title race a few weeks ago, but suddenly, they have their mojo back. Now they are 2nd, tied with Liverpool, but ahead on goal differential. There is no reason to believe that Manchester City couldn’t do that either. 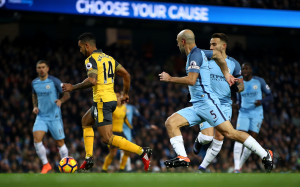 MANCHESTER, ENGLAND – DECEMBER 18: Theo Walcott of Arsenal (L) runs through to scores his sides first goal during the Premier League match between Manchester City and Arsenal at the Etihad Stadium on December 18, 2016 in Manchester, England. (Photo by Clive Brunskill/Getty Images)

The more important question, however, is will they turn it around enough? The answer is a bit more difficult, but they probably will not be able to. Too much of the damage has already been done. Ten points off the top of the table, with some big games still to be played this season, is not a place you want to be if you plan to challenge for the league title. There are still some hopeful signs, though. If Chelsea loses to Liverpool and Arsenal and Manchester City wins, they will be only four points away in early February. This would place them back in the running, though still with some ground to pick up.

Finally, what does Pep have to gain from saying that Manchester City are out of the title race? At the risk of sounding like a #mindgames mouth-breather, Guardiola is saying this for 100% mentality reasons. Right now, Manchester City are under immense pressure. Manchester City began the season as title favorites. They finally got the manager of their dreams after half a decade of chasing him. They gave him the funds to get the players he wanted. Now, they are falling disastrously short. By essentially admitting defeat at this stage in the season, it sends a message to the team that they aren’t hitting their goals this season. It’s both a warning message to the players underperforming, while at the same time relieving pressure from the team. In a sense, it also is ‘shifting the goal posts’ a bit, by reframing expectations for this season as a race for the top four, instead of the title. In this way, Guardiola has begun looking ahead to next season and putting whatever energy they have this season into the Champions League. 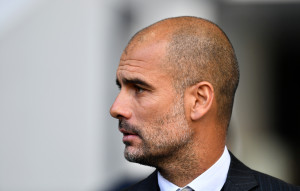 So, to ultimately answer the question, was Guardiola correct in saying that Manchester City are out of the chase for the Premier League title? Most likely. At this stage, they are statistically unlikely to be in the hunt, and any chance they have will evaporate should they have another result like their game against Everton. On the mental side of the game, Guardiola is sending a message to his players that this wasn’t good enough, but the pressure is now off. If the team takes to it in this manner, then the move will be seen as the right one. The risk, however, is that the fans, players, coaching staff and owners may not like that Pep is admitting defeat so soon, and may damage his reputation a bit. There is also the chance that the players may take this as an excuse to play like their season is over, which could lead to more poor results. If that does occur, Manchester City runs the risk of falling out of the top four and the Champions League for next season. Then, it won’t look like such a good idea. As with anything in the Premier League, though, we won’t know until next weekend. Then we can draw a whole new set of conclusions.