Leicester’s 2016/17 season has not gone according to plan. Their defense of the Premier League title has been bumpy at best, and they now sit a single point above the relegation zone. If they do not turn things around immediately they risk dropping out of the Premier League next year. Much of the blame falls on the shoulders of the players, but Claudio Ranieri also must hold his hands up. He has failed to inspire or push his players to compete at the levels they showed last year. So the question is, when should Leicester sack Claudio Ranieri? 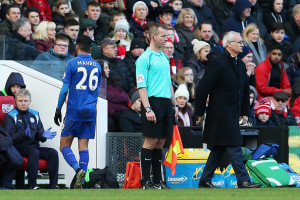 This may seem reactionary or symptomatic of a modern game, where you’re a hero one season and a buffoon the next. Regardless, It is a legitimate concern. It all comes down to the type of manager that Ranieri is. He is the perfect manager to keeps things going when they are great. Ranieri gives the players lots of freedom and is almost like a kind grandpa. He throws pizza parties for his players. These are great for moral when you’re winning, but can be harmful when things are bad. Right now, Ranieri’s good cop routine is not enough to get the team going again. So if it’s going to happen, when would be the best time to sack the Premier League winning manager?

There are currently three schools of thought here. First, there are some that say he should get the sack immediately. This may sound heartless, and it is, but there is a cold pragmatism at work. First, Ranieri has shown he is unable to turn this slump around.  To persist out of a sense of duty or sentimentality is to risk digging yourself into an even deeper hole. By sacking Ranieri now, Leicester would give the new manager as much time as possible to turn their season around and survive relegation. It’s harsh, but it would rip the band-aid off in well motion and begin the healing process. 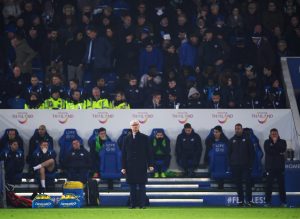 LEICESTER, ENGLAND – FEBRUARY 05: Fans leave their seats before the final whistle as Claudio Ranieri manager of Leicester City looks on during the Premier League match between Leicester City and Manchester United at The King Power Stadium on February 5, 2017 in Leicester, England. (Photo by Laurence Griffiths/Getty Images)

Finally, there is the group that wants to give Ranieri the rest of the season. This would risk relegation from the Premier League, but he has undoubtedly earned the faith. He won the league with Leicester, who were wallowing in the relegation zone for much of the season before that. It is also debatable that sacking Ranieri would even keep Leicester up. This could be the players returning to their 2014/15 form. The three teams below them do not look like they will pull themselves out of the relegation. Any improvement in Leicester’s form may be enough to save them.

Ultimately, there is never a right answer to these kinds of things. Discussing sacking Claudio Ranieri is sad, but needs considered. So where do you fall in this discussion? Personally, I’m a rank sentimentalist, to quote Claude Raines in Casablanca. We would love to hear what you think. Should Leicester stick with Claudio Ranieri or start the rebuilding process now?