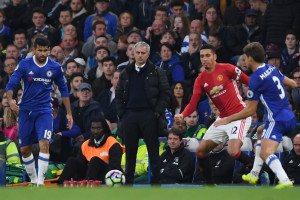 Manchester United’s fortunes have swung wildly this season. At the beginning of the season, it looked like they would be among those challenging for the title. That collapsed a bit after their form turned sour following their defeat to Manchester United. Then things began to stabilize before destabilizing once again. Now, they sit in 6th place, eight points off the top and five away from Champions League spots. This weekend, they will play old foes Arsenal at Old Trafford. With the context surrounding this game going into the weekend, just how important is a win for Manchester United?

On the face of things, a win for Manchester United puts them three points off the current top four and tied for 5th. This could obviously change with a Tottenham win or draw, but it would be a very important step in closing the gap between the top four and themselves. With the amount of money that has been spent and with Jose Mourinho at the helm, top four has been made the clear goal and right now, they look like favorites to miss out. This game will be vital in evening out the point totals in their favor. 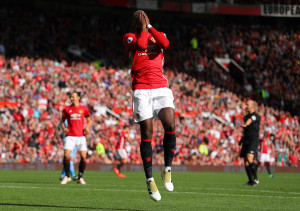 MANCHESTER, ENGLAND – OCTOBER 02: Paul Pogba of Manchester United reacts to shooting wide of the goal during the Premier League match between Manchester United and Stoke City at Old Trafford on October 2, 2016 in Manchester, England. (Photo by Richard Heathcote/Getty Images)

Beneath the surface, though, a win would change the narrative surrounding Manchester United. In the past, I have discussed the importance of narrative in soccer. It is one of those intangibles that has a massive effect on a team. It also builds the fear factor, which can help win games. So, right now the narrative surrounding Manchester United isn’t great. They have a small defensive injury crisis, the manager under intense pressure, and the team is fairly out of form. Yes, they defeated Swansea in their last outing, but that’s not much to brag about considering how Swansea have been lately. A win against Arsenal, who have been in good form, is both possible and essential to relieving some of the growing pressure on Mourinho’s men.

In between the two extremes of winning or losing is always drawing. It’s a definite possibility that this game could be a boring 0-0. What would be the outcome of that possibility? Well, dropping points through a draw would have them fall further from the pack. Should the teams ahead of them all win (very possible), they would be ten points off the top of the table. The upshot is that they would still be six points away from the top four, so they wouldn’t be any worse off. Added to that, a draw against Arsenal isn’t necessarily a bad game, since Arsenal are definitely a very good team. Those dropped points could easily be explained away and forgiven, as long as they are sure to gain points against smaller teams. 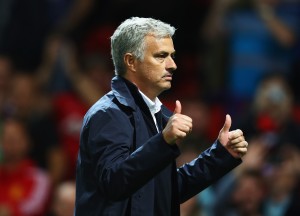 MANCHESTER, ENGLAND – AUGUST 19: Jose Mourinho, Manager of Manchester United gives the thumbs up after the Premier League match between Manchester United and Southampton at Old Trafford on August 19, 2016 in Manchester, England. (Photo by Michael Steele/Getty Images)

Now on to the third possibility. A loss would be devastating to Manchester United. Simply put. Best case scenario for Manchester United here, every team ahead of them loses, and Arsenal goes to the top of the table. This would land them nine points behind the top of the table and no closer to top four. The worst case scenario for them would be if every team ahead of them wins. Again, this scenario is very possible. That leaves Manchester United eleven points off the top and nine points away from top four.

This would also heap pressure on Jose Mourinho and his players. While they may only fall to 7th place (Watford may win against Leicester, but have a -4 differential currently compared to Manchester United’s 3), it would be their fourth loss of the season and leave many questioning if the board made the right choice bringing in Jose Mourinho. A loss would be devastating both for the point total and the narrative.

For that reason, I wouldn’t be shocked to see Mourinho play a similar game as he did against Liverpool. Push hard very early and then sit back defend. A defensive approach against Arsenal may be the smart one for Jose and he will be hoping that his years of frustrating Arsene Wenger continue this weekend. It may be a big ask, though, considering the task ahead of him.