As the 2018 World Cup Qualifiers start to heat up, teams in contention for the biggest event in world football are feeling the pressure as the World Cup draws nearer. The World Cup Qualifiers are upon us once again and, as we all know, the United States will take on Guatemala, first in the Estadio Nacional Mateo Flores in Guatemala City and then again in Mapfre Stadium in Columbus.

Although most U.S. Soccer fans will be focusing on the USMNT as they try and finish top of their group on their way to the hexagonal, there are other games that will prove to be interesting in this international break. 32 Flags brings you five games (that are not the United States and Guatemala) that will be of interest in this World Cup Qualifying stage.

Mexico looks to stay perfect in Group A of the CONCACAF qualifying under new boss Juan Carlos Osorio when facing off against Canada, first in BC Place in Vancouver before traveling back home to the friendly confines of the Estadio Azteca. Mexico has a hefty squad that is full of European experience such as Javier “Chicharito” Hernández (who is doing very well for Bayern Leverkusen), Andrés Guardado (PSV Eindhoven), Jesús Manuel Corona, Héctor Herrera and Miguel Layún (all FC Porto). Mexico is heavily favored to take six points against the Canadians, as they look to expand their lead on their way to the hexagonal.

However, Canada is answering with back-to-back MLS Rookies of the Year with Tesho Akindele  and Cyle Larin to lead the attack against the Mexican defense. Canada hasn’t played since their 1-0 loss to the United States, where they looked great defensively and they will have to play with that same intensity if they want to surpass the Mexican squad as the first place team in Group A. 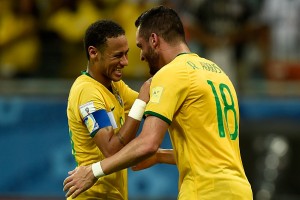 SALVADOR, BRAZIL – NOVEMBER 17: Neymar (L) and Renato Augusto of Brazil celebrate a scored goal during a match between Brazil and Peru as part of 2018 FIFA World Cup Russia Qualifiers at Arena Fonte Nova on November 17, 2015 in Salvador, Brazil. (Photo by Buda Mendes/Getty Images)

In the CONMEBOL, Brazil and Uruguay will battle it out for second place in the South American qualifiers as they try and keep the pace with overall leaders, Ecuador. Brazil comes into this international break with familiar names such as Neymar, Hulk and Oscar. However, some interesting picks from manager Dunga as he has picked Gil and Renato Augusto, who play in the Chinese Super League. Not to mention, Dunga is relying on an inexperience goalkeeper corps as all three keepers have 13 caps combined. To put this into perspective, 24-year-old Danilo has 15 caps by himself, so it will be interesting to see how these goalkeepers perform for Brazil.

On the other hand, Uruguay comes in stacked on offense with Luis Suárez, Edinson Cavani, and Diego Rolán leading La Celeste‘s attack. Although Uruguay is relying on a veteran backline and midfield, there are some interesting additions as Guillermo Varela (Manchester United), Matías Vecino (Fiorentina) and Diego Laxalt (Genoa) are capped by their home country for the first time. We will see if they can make an impact with their first caps, as they hope to be capped for future fixtures leading to the World Cup.

Argentina has struggled so far in World Cup Qualifying, so far they sit in sixth place, just missing out on the World Cup right now. However, this game against Chile will be a test to see how Argentina deals with adversity so far. Chile will try and make things difficult for the Argentines as they want to move away from the inter-confederation playoff spot they sit in and want to move into the automatic World Cup qualifying place.

Both teams are relying on purely veteran squads so it will be interesting to see who will come out on top, and to see if this is the start (for either team) to break out of this bad form and into the top spots in qualifying. Eyes surely will fall on Lionel Messi and Alexis Sánchez to be the leaders for their respective teams.

If you are a fan of football at 6:30 (EST) in the morning, then this match is for you. Japan takes on Syria as both teams look to the first place in the Asian Qualifying’s Group E, as the qualifying draws to a close. This game is important for both teams as it will be the game that most probably decides who wins the group. With just one point separating the teams so far, the winner of this game will move on to the third round of AFC qualifiers, and the loser will have to hope they are one of the best second place squads to move on to the next round of World Cup Qualifying.

The game will take place in Saitama, Japan, a place where Japan has not lost a game so far — so it will be an interesting match between these Asian Confederation rivals.

Group A in the CONCACAF isn’t just Mexico and Canada, as the other two teams that make up the group will do battle in Central America to try and gain ground on their northern neighbors. With two games between both teams (first in San Salvador and then in San Pedro Sula), it will be crucial for a team to try and sweep both games to get a foot into the first two spots.

Both Honduras and El Salvador field strong teams, and in my opinion, the potential second team that goes on to the hexagonal will be one of these two teams. But it starts here, in these two games that will decide who goes on for a chance to make the biggest spectacle in world soccer. Honduras has that experience in making the World Cup and will be strong favorites in both games. It will be up to El Salvador to play spoiler and try and knock off Los Catrachos.