MLS made a big decision recently to disclose the amounts of allocation money swapped in trades, and Monday’s deal between the Chicago Fire and the New York Red Bulls is one of our first opportunities to use that information to help evaluate the deal.

Longtime Red Bulls defensive midfielder Dax McCarty, 29, was traded to the Chicago Fire in exchange for a total of $400,000 General Allocation Money over the next two years. That is believed to be one of the highest amounts of allocation money used in a trade, and it will set the Red Bulls up for a likely expensive transfer coming in the next month or two.

McCarty made 169 appearances with the Red Bulls since arriving in New Jersey back in 2011, becoming a key cog in Jesse Marsch’s Supporters’ Shield-winning midfield. He played as the No. 6 alongside No. 8 Felipe and No. 10 Sacha Kljestan, leading distribution out of the back and helping to coordinate the complex pressing system employed by Marsch.

The Red Bulls’ 4-2-3-1 used over the past couple seasons would not have been nearly as effective as it was without the prowess of McCarty in the hole. He freed Kljestan to be the primary creator for goal-scorer Bradley Wright-Phillips, and his ability to recognize and react to attacks that broke through RBNY’s press helped his club avoid odd-man rushes and goals from counter-attacks.

His effect has especially been felt during his rare absences from the Red Bulls’ lineup. They had three wins, four draws and three losses in the ten games that he did not start since the beginning of 2015.

Because McCarty was such an important player for the Reds, and because of the fan base’s affection toward him, it had to have been a tough decision to let him go for the Red Bulls’ front office. But they had two main reasons to trade him: 1) they have a ready-made replacement in 23-year old Sean Davis and 2) they received a massive amount of GAM that can be spent on a need elsewhere. 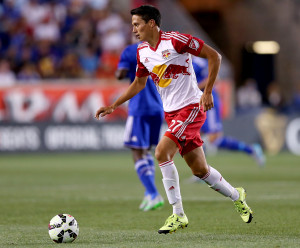 Davis was named the 22nd-best MLS player under the age of 24 this year and already has accumulated 1,500 MLS minutes. He made a name for himself in the summer of 2016 when he admirably filled in for McCarty when the starter was injured for a month; he picked up a couple goals and three assists during his time in the starting lineup and he proved his above-average tactical awareness, intelligence on the ball and confidence to venture forward when need be.

A Red Bulls Homegrown and four year college starter at Duke, Davis has gained the trust of the front office to the point where McCarty became dispensable. Now, they can use the hefty sum of money acquired from Chicago to fill a more pressing need, like a game-changing winger or a starting-caliber full back, perhaps.

As for Chicago, they get a veteran player who will fit well on a developing squad. Newly-signed No. 8 Juninho — a title-winner with the Galaxy in previous years — will partner with McCarty in deeper midfield and they will have the opportunity to feed talented attackers like speedy winger David Accam (who is now poised for a true breakout campaign) and newly-signed center forward Nemanja Nikolic.

The partnership between Juninho and McCarty will inevitably be compared to that of Juninho and Marcelo Sarvas, which was a key factor in LA’s 2014 championship. If Chicago are able to replicate that, they will be on pace for a playoff season.

With McCarty arriving on the scene, though, it likely means the end for Matt Polster, the former US youth international who was originally going to play alongside Juninho. It’s hard to see a meaningful future role for the 23-year old unless the Fire are planning to switch him to right back, a previous failed experiment by Vejlko Paunovic’s predecessor Frank Yallop.

That means Polster is likely on the trading block. There are a few MLS teams who could be interested in his services: New England recently saw Gershon Koffie leave for Swedish club Hammarby, leaving a hole in the base of their diamond midfield; Minnesota United could use a partner for Collen Warner; the Galaxy saw Jeff Larentowicz leave and could use a foil for Jermaine Jones; and D.C. United may want to start looking at replacements for the aging Sarvas.

If you want more on Polster, enjoy this Twitter scouting report I did of him a few months ago. One of the main takeaways: HE IS NOT A RIGHT BACK, so plan accordingly, Fire.

Anyway, this move is a net gain for everybody here, with the possible exception of poor Matt Polster. The Red Bulls get the opportunity to start a promising Homegrown player next year and receive a boatload of cash money for a longtime star and fan favorite, while Chicago acquire a player with a few years left in the tank who will partner well with another new acquisition and help to set up a sturdy foundation for a growing young team.