The International break is over, and players are headed back to their clubs, but over the past week many of Europe’s top players spent time trying to qualify for the 2018 World Cup in Russia. With countries divided into nine groups of six teams, each group winner will automatically qualify, while the 8 best runners up will take part in a playoff for the remaining four spots. All in all, there are 13 European places that need to be booked for Russia next summer, and while qualifying is still young, here is a look at how some of the teams are getting on.

France got off to a shaky start in qualifying when they drew with Belarus a month ago, But this week they put themselves back on track with wins against Bulgaria and the Netherlands. In their 1-0 over the Dutch, Paul Pogba was the lone goal scorer, which will likely make United fans plenty happy to see.

With Seven points Pogba and France sit Level at the top of the group A table with Sweden who won both their matches this break. Sweden is off to a good start in their post-Zlatan era. They’ll need to find plenty of scoring elsewhere, though, if they hope to stay on top of Group A, otherwise France will likely take control.

The surprise team at the top of group B has been Switzerland. They beat the current European champions Portugal back in September and they padded their lead in the table this week with two wins over Hungary and Andorra. The former was a five goal thriller, with both sides traded goals in the second half.  Hertha Berlin’s Valentin Stocker scored the winner in the 90th minute.

Portugal, meanwhile, has responded nicely since that defeat to Switzerland. They’ve scored 12 goals in their two games during this international break. The Faroe Islands and Andorra provided little resistance to Cristiano Ronaldo and the rest of the Portuguese side. 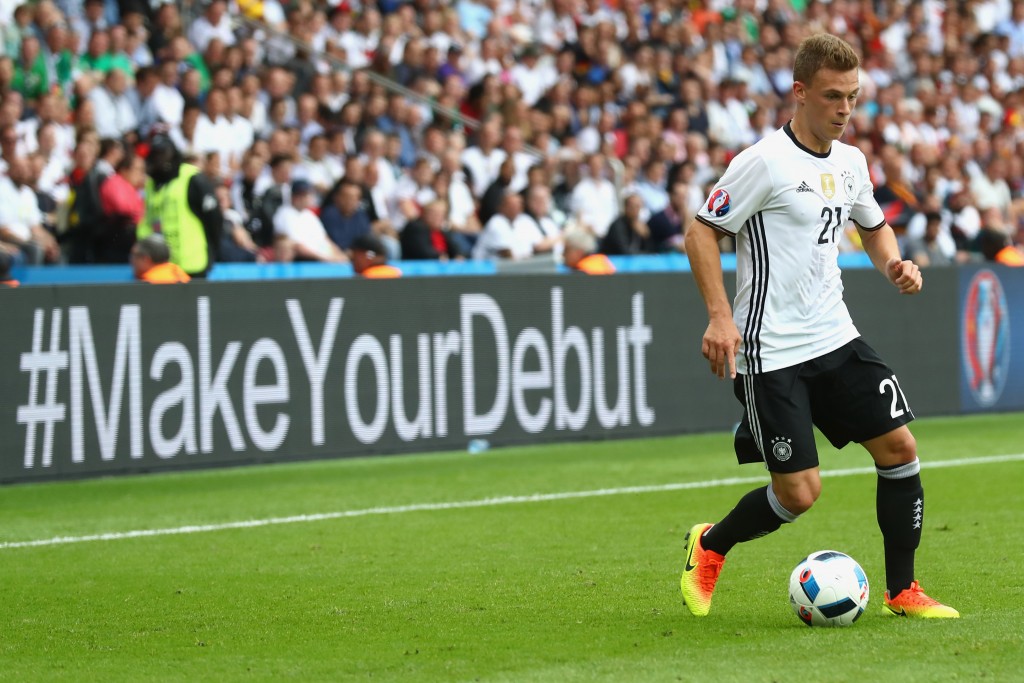 Resting comfortable at the top of group C is Germany. The defending world champions cruised to a pair of easy wins against the Czech Republic and Northern Ireland this week. Thomas Müller who has been in a pretty nasty slump since the European Championship scored two in Germany’s 3-0 win against the Czech Republic. That will be crucial for Joachim Löw’s men who are still searching for a permanent replacement for Miroslav Klose. If the first three games are any indications, Germany should stroll through this group.

The rest of the group isn’t as glamorous, with the only other big name being the Czech Republic, but they’ve had a poor start to qualifying. Azerbaijan sits in second place with seven points, which is the biggest surprise in that table. Azerbaijan and the Czech Republic played out to a 0-0 draw on Tuesday.

WE FUCKING SCORED AN AWAY GOAL. STEFANELLI YOU FUCKING LEGEND!

Group D features a few teams who made headlines at EURO 2016. Wales, Austria, and Ireland are all battling to get into Russia in 2018. However, after three matches it’s Serbia who tops the group. Serbia beat Moldova on Thursday and defeated a struggling Austria team on Sunday. Austria, who were considered a dark horse at the Euros have only managed to beat Georgia so far this campaign.

Wales have also struggled, drawing with Austria and Georgia this week. Gareth Bale scored early against Georgia, but the team was unable to rally around him and they dropped points to the Eastern Europeans. Ireland on the other hand, have done reasonably well this week. The Irish picked up a pair of victories this week against Georgia and Moldova.

The biggest team in group E is Poland, and they picked up six points in their two matches this week. Tuesday they grabbed a win over Armenia thanks to a 90th-minute goal from Robert Lewandowski. The Polish striker also scored a hat-trick earlier in the week when his side hosted Denmark. He’s been in stunning form of late, but Poland is only in a tie for first in that group with 7 points. They share the lead with Montenegro, but the small Baltic country has the advantage on goal difference. It’s hard to see Poland not coming out on top in this group, especially with Lewandowski leading the charge, but they’ll want to put some distance between them and the competition soon. 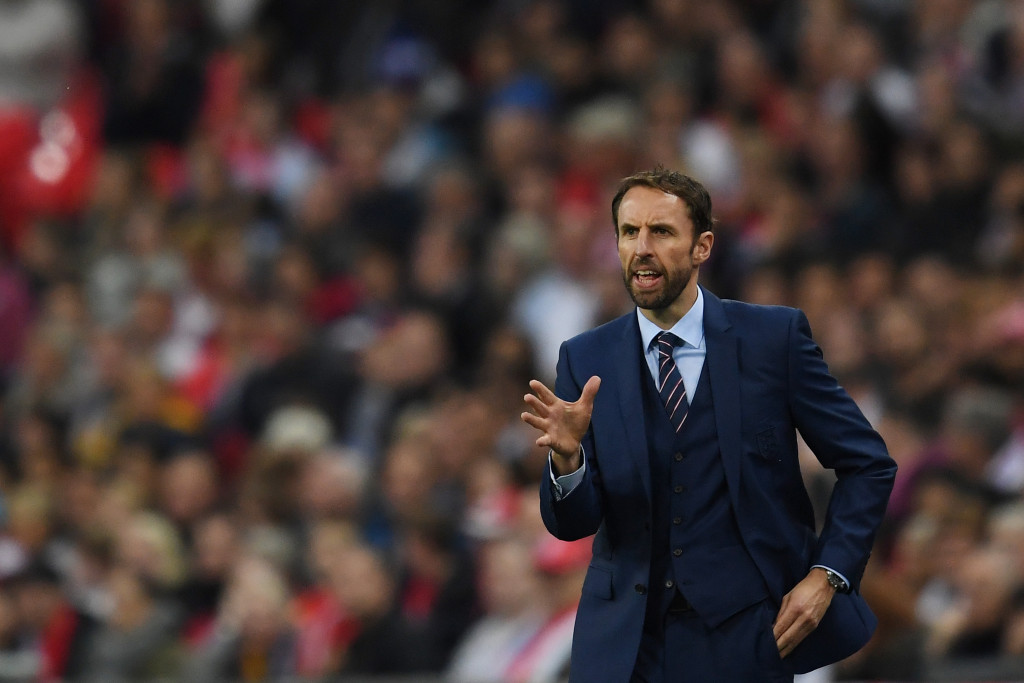 It’s been a hectic few weeks for the English FA, and interim Manager Gareth Southgate did his best to keep things quite. Southgate got off to a good start as England manager with a 2-0 win over Malta, but a 0-0 draw against sneakily good Slovenia threw the always dramatic English media into a frenzy. However, England still sits atop the table in the group, which isn’t looking terribly difficult to get out of. England has a two point lead over Lithuania and Slovenia so they are in a strong position.

The same can not be said of their neighbor to the north, Scotland. The Scots drew with Lithuania at the start of the week and then were embarrassed 3-0 by Slovakia on Tuesday. They’re down in fourth at the moment and will need to turn it around in a real hurry to have a hope in qualifying.

The big match during this week’s international break was Italy vs Spain, a rematch of the 2016 Euro round of 16. Points were shared in that match, with the teams drawing 1-1. Spain was in fine form for most of the match and looked like they would go on to win, but a late penalty gave the Italians a lifeline. Spain would go on to beat Albania on Sunday 2-0. Meanwhile, Italy would have a tougher time with Macedonia but did manage to pick up three points in a 3-2 victory. Both teams remain level on points at the top of the table, but thanks to Spains 8-0 thrashing of Lichtenstein last month, they have the superior goal difference.

Italy and Spain’s draw this week could open the door to another nation, like Albania or Isreal sneaking into this race, but in all likelihood, it will be Spain and Italy finishing one-two. Which country takes the top spot will probably come down to their final group meeting next September.

Belgium is cruising at the top of Group H. Three wins out of three and a goal difference of +13 has put them in a good spot after 3 games. They easily handled Gibralter and Bosnia-Herzegovina this week. Christien Benteke bagged himself a hat-trick against Gibralter, while other big name Premier League stars, Eden Hazard and Ramalu Lukaku also found their way onto the scoresheet against Bosnia-Herzegovina.

The group is still up for grabs, however, as Greece have also picked up all nine points on offer so far. They had a good week themselves beating Estonia and Cyprus. Greece and Belgium haven’t met yet in these qualifiers. That meeting won’t happen until March, so Greece will want to rack up as many points as possible before that challenge presents itself. 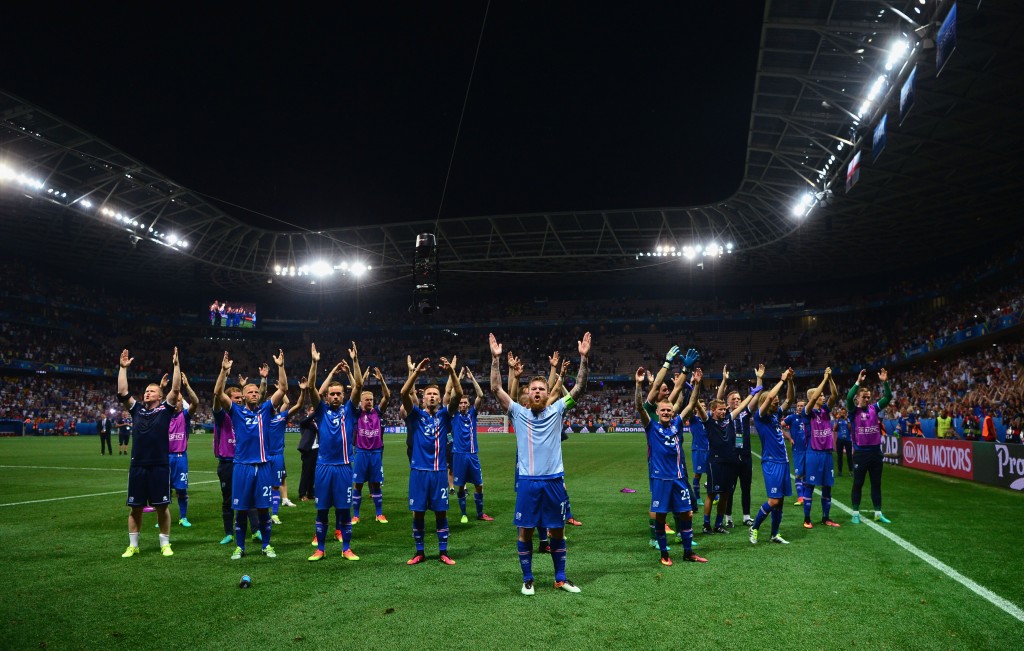 NICE, FRANCE – JUNE 27: Iceland players celebrate their team’s 2-1 win in the UEFA EURO 2016 round of 16 match between England and Iceland at Allianz Riviera Stadium on June 27, 2016 in Nice, France. (Photo by Dan Mullan/Getty Images)

Everyone’s favorite Cinderella story, Iceland are off to a nice start in their qualifying. They picked up a 3-2 win over fellow Nordic country Finland on Thursday, putting them near the top of the group I table. They also took care of Turkey on Sunday with a 2-0 win. Iceland has a very good chance of making it to the World Cup considering their group. Their main rivals are Croatia and Ukraine. Iceland drew with Ukraine back in September, but they have a 2 point advantage over them in the table.

Croatia, who sit level on points with Iceland, picked up a pair of wins this week against Kosovo and Finland. They’re going to be confident that they’ll make it to Russia if they can keep Iceland at bay when the two teams meet in November.