The FIFA Rankings are out and they’re even more outrageous than we projected. As you can see, while they beat the Netherlands and Germany, we had the United States in 27th and they’re actually in 34th. Argentina moves up to 1st despite losing the Copa America Final and Wales is somehow 10th. So how does this happen, how do confederations exploit this and why is it so important to understand what’s going on?

The FIFA Rankings are the basis of how teams are seeded for various tournaments and especially World Cup Qualifying. It is also something (albeit a small part) that’s considered when FIFA considers how to divide the 32 World Cup spots to each confederation. So while we make fun of the FIFA Rankings and they’re compiled in the most comical of ways, it’s still very serious and very important for how the soccer world is shaped.

The formula which how each game is ranked for a team is explained here. The overall formula is P (Points) = M x I x T x C.

“M” equals the match where, like in a tournament, you get 3 points for a win, 1 for draw and 0 for a loss. For games going to PK shootouts, the winning team gets 2 points and the losing team gets 1. And if you go back to elementary school math, a team that loses a game will make the result worth 0 points.

“I” equals the importance of the match. Points range from 1 point for a friendly to 4 points for a World Cup game. Participating in a World Cup or confederation qualifier is worth 2.5 points and a confederation tournament game and Confederations Cup game is worth 3 points.

“T” equals strength of opponent. This is determined by taking 200 – the FIFA Ranking of the opponent (minimum value of 50).

“C” equals strength of confederation. Based on confederation performances in the last three World Cups playing a CONMEBOL team equals 1 point, UEFA team equals .98 points and everyone else equals .85 points.

All these points you get for each game are averaged out to determine your point total over the year. Your point totals from the last four years get weighted whereas on this month, you get 100% of your points from July 2014 to today, 50% of points compiled from July 2013 to June 2014, 30% from July 2012 to June 2013 and 20% from July 2011 to June 2012. Games played in June 2011 and before are now worth 0. All that added together gets you your final ranking. This is why the FIFA Rankings took a huge jump this month because this was the first month where points earned during the 2014 World Cup are now only worth 50% compared to 100% last month. That was why a country like Costa Rica dropped from 14th to 41st. Their magical run dropped from being worth 100% to 50% overnight and countries with more consistent results over the four years passed them.

How can people affect the FIFA Rankings

While many fans discredit the FIFA Rankings, some have been taking (legal) advantage of how the FIFA Ranking is determined for their own benefit. Take UEFA for example. It’s not a coincidence there are a lot of UEFA teams near the top. Obviously teams like Germany, Spain, Portugal and the Netherlands are going to be up there but we see UEFA countries who aren’t soccer powerhouses near the top. Wales is in 10th, Iceland is 23rd, Scotland is 29th and Sweden is 33rd. These four teams didn’t play in the World Cup last year and they’re all ahead of the United States.

For the United States, they dropped seven spots despite winning four games since last month’s FIFA Ranking. For one thing, their points from the 2011 Gold Cup dropped from being worth 20% to 0% since that was played in June 2011 so that explains a lot of the drop. Warning, since their 2013 Gold Cup points came in July 2013, all of the United States’ points from their Gold Cup win will drop from being worth 50% to 30% next month, likely resulting in another drop in next month’s standings especially if they don’t win this year.

Anyway, now looking at this past month. the United States had a great month defeating the Netherlands, Germany and Guatemala in friendlies and Honduras in the Gold Cup. The United States earned 272.85 points against Guatemala, 535.44 points against the Netherlands and 549.24 points against Germany. Just because it was the Gold Cup, the United States earned 956.25 points beating Honduras on Tuesday night. They earned almost double the points beating the 75th ranked team in the world at home in a tournament than beating the 1st ranked team in Germany in a friendly. That is how important these tournaments are in comparison to friendlies. 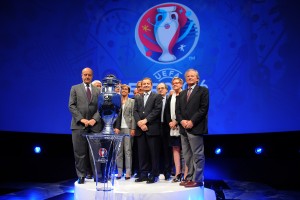 Now about these unlikely UEFA teams being high up in the FIFA standings, they’re in that position because of how UEFA is scheduling games and setting their tournaments. In this four year cycle in between World Cup’s, EURO 2016 Qualifying started on September 7, 2014, just three months after the World Cup. Each team plays a minimum of eight games but most will play 10 and these games go to November 17, 2015. That is an entire year of games that are valued much higher than regular friendlies. So when the United States is busting themselves playing in friendlies that have a multiplier of 1, most UEFA teams have already played six games of UEFA Qualifiers that have a multiplier of 2.5 and a .98 multiplier due to confederation strength. And those multipliers remain the same if England defeats 18th ranked Switzerland than defeating 192nd ranked San Marino. The only difference is the strength of opponent multiplier which ranges between 200 and 50. England earned around 1,351 points by defeating Switzerland and around 371 points by defeating San Marino. So England, at worst, beating one of the worst teams in the world gets about 50% more points than when the United States wins against a middle of the FIFA Rankings country in a friendly.

That is key, UEFA plays fewer friendlies (which weighs down the point average) and replaces that with qualifiers against other UEFA teams. So after the Euro Qualification ends this September, UEFA teams only have to deal with friendlies for nine months until Euro 2016 starts in June 2016 whereas the multiplier is 3. Like Euro Qualifying, UEFA World Cup Qualifying starts on September 4, 2016 and runs until November 14, 2017. And then after seven months, the 2018 World Cup starts. So in four years, UEFA only has 16/48 total months when they don’t have the benefit of playing in tournaments and qualifiers, compared to the United States who have 22/48 months of non qualifying and tournament play.

These 16 out of 48 months where UEFA teams will have to play friendlies seem like it’s too much for them. In December 2014, UEFA proposed the concept of the UEFA Nations League. The UEFA Nations League would be another tournament played right after the World Cup and place UEFA teams in different leagues and groups culminating in a four team knockout stage tournament. This will not only keep the .98 multiplier for only playing UEFA teams and since they’re tournaments, the match importance multiplier will triple than the regular friendly making UEFA dominate the top of the table.

It’s no secret the FIFA Rankings is one of the most insane and inaccurate ways to determine who the best team in the world is. Other ranking systems like Elo are somewhat more accurate but let’s face it, the FIFA Rankings are the ranking of record in determining who gets seeded where in the soccer world and it’s not going away anytime soon. By understanding the serious complexities of the ranking system just a little bit more, we can stop joking about the absurdity of the FIFA Rankings and realize that this is another terrible idea from the FIFA brain trust.