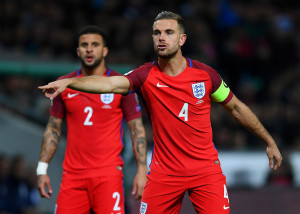 Today, England will take on Spain in World Cup Qualifying. Liverpool captain Jordan Henderson is expected to take the armband off of Wayne Rooney, who will be out due to injury. This move was anticipated, however, England manager Gareth Southgate confirmed that Rooney would have started from the bench even if he was fit. With that, the last member of England’s failed “Golden Generation” is being phased out, and it’s beginning to look a lot like a new generation of international soccer for the Three Lions. Can they be more successful than the generation of Steven Gerrard, Frank Lampard and Rooney?

It’s a big call, but tactically, this group of players that are coming up in England now have something that the “Golden Generation” didn’t: Tactical flexibility. For all of their amazing ability, the common trope for Gerrard and Lampard is that you couldn’t get them into the same team without diffusing the ability of one of them. That’s a vital location on the pitch you need to lock down, but the debate about who should go where raged for nearly their entire international careers. 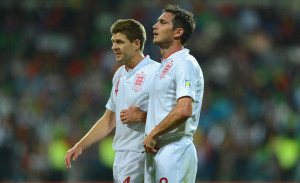 CHISINAU, MOLDOVA – SEPTEMBER 07: Steven Gerrard and Frank Lampard of England look on during the FIFA 2014 World Cup qualifier match between Moldova and England at Zimbru Stadium on September 7, 2012 in Chisinau, Moldova. (Photo by Michael Regan/Getty Images)

The fact of the matter is that nearly every player on England during that time was the best in a specific position and had to be played there. This limits the tacitcs, formations and styles that the team could choose from. Now, look at the current England squad. Up front, you have Daniel Sturridge, Harry Kane, Jamie Vardy and Marcus Rashford, who can all play multiple positions (either on the wing or deeper on the field). In midfield, you have Adam Lallana, Raheem Sterling and Henderson, who can all play several positions. Even Eric Dier and Dele Alli, who are more specialized, are able to be shifted around the pitch a bit. Only in defending do the players lack the ability to be shifted around the pitch, but you don’t really want your defenders to be fine at everything, masters of nothing.

Beyond just tactical flexibility, England now boast more players in more positions that can do the job, while doing it slightly differently. Look at the attack. During the “Golden Generation,” the strikers were Rooney or Michael Owen. There were occasionally others, like Emile Heskey, but the two big ones were Rooney and Owen. Now, there is Sturridge, Kane and Vardy, who are arguably three of the best strikers in the Premier League. Apart from skill, they are all very different strikers. Sturridge can drift around, is a natural finisher and is a highly technical player. Kane likes to drop deep, get involved and is equally as good a finisher. Then you have Vardy who is a natural poacher with incredible speed. He just loves to score goals of any kind. With those three options, you can play really almost any system. In midfield, you have technically-sound players like Lallana, you have the steel of a player like Dier or the good, old-fashioned all action midfielder like Alli. Then you have players like Henderson, who can be any of those depending on the system. This is a tactically sound, technically proficient group of players. 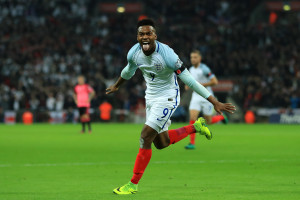 LONDON, ENGLAND – NOVEMBER 11: Daniel Sturridge of England (9) celebrates as he scores their first goal during the FIFA 2018 World Cup qualifying match between England and Scotland at Wembley Stadium on November 11, 2016 in London, England. (Photo by Richard Heathcote/Getty Images)

Finally, this England squads’ biggest reason to hope is that there just isn’t much expected of them. The biggest milestone around the neck of the “Golden Generation” was the expectation that was placed on them from a young age. They were some of the best players in the world in their positions and so much was expected of them. Too often, the press and the fans would get on their backs for any slip up or any possible fracturing in the team. The focus, unfortunately, was too often not on the soccer itself, but everything surrounding it. It was almost as if the press and fans knew that the players were talented so they began worrying about everything else. Talk of WAGS (wives and girlfriends), of who is falling out with who or of who wasn’t happy with the manager’s tactics now.

That just hasn’t happened yet with this team. They have grown up in the “soccer players are celebrities” culture that has sprung up in the sport. They have all received media training and most seem to have exceptionally good heads on their shoulders. They may not be the Rolling Stones, with the rock star aura that surrounded the “Golden Generation,” but they may just be the Beatles.

*That said, this is England. Prepare to be disappointed.