It broke a deadlock between the USWNT and the team it defeated in the semi-final, Germany, for most Women’s World Cup titles in history.

The United States started off strong from the beginning, scoring an astonishing four goals in 16 minutes. Three of those goals came from Carli Lloyd, to which Japan had no answer for. The USWNT managed to get revenge on Japan, who beat the United States in the last edition of the World Cup in penalty kicks.

The first goal of the game came in the third minute, elating the crowd inside BC Place in Vancouver, which was mostly packed with USWNT fans. American fans in attendance would not have their elation stop thee though. That’s because two minutes later Lloyd scored her second of the game from a corner. After a nicely timed run and some confusion in the area, Lloyd was able to get the U.S.’s goal.

Lauren Holiday then scored the U.S.’s third goal from a failed clearance by the Japanese defense, and she converted on a nice volley that beat Japanese keeper Kaihori. All of that in just the first 14 minutes of the match, as the USWNT raced out to a 3-0 lead.

Then the goal of the tournament was scored by who else but Carli Lloyd, as she caught Kaihori off her line and delivered a rocket from midfield. Japan’s goalkeeper could do nothing but back track and try a desperate parry that she could not keep away from hitting the post and in for the 4-0 U.S. lead.

Japan tried desperately to recover, and managed to do so by getting a goal back to reduce the deficit to three goals. Yuki Ogimi scored on an excellent cross by Nahomi Kawasumi, as she turned away from a pressing Julie Johnston, and beat U.S. keeper Hope Solo on her right side. Japan also made early substitutions bringing in Homare Sawa and Yuika Sugasawa before the half ended, trying to do anything to try and change the momentum of the game. 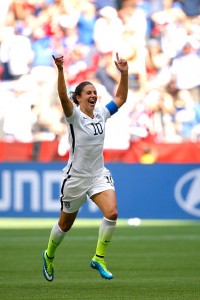 The half ended on that note with the United States leading Japan 4-1. Japan knew they had to come out with something spectacular in the second half if they had any chance of salvaging this game, but it was to no avail.

Early in the second half, the United States’ defender Julie Johnston scored an unfortunate own goal from a cross by a Japanese set piece that made USWNT fans a little uneasy. However, two minutes later the U.S. got that goal back as, they continued a play from the corner, Tobin Heath received a nice low cross from Morgan Brian that she simply tapped in for the 5-2 lead.

It was all the scoring that would occur in the game as the U.S. tried to control the tempo and finish off the last 35 minutes with a three goal lead. The U.S. would bring in veterans Abby Wambach and Christie Rampone to finish off the game and the Vancouver crowd gave them a warm ovation as they entered the field for the last time on the world’s grandest stage.

After the final whistle blew at the 93rd minute, the sold out crowd in BC Place witnessed the ultimate joy for the United States and the devastating agony of defeat for Japan. The United States bench cleared to celebrate with the players on the field and head coach Jill Ellis was in the middle of the jubilation.

Finally, the USWNT achieved their third star in team history, winning their first Women’s World Cup since 1999. The United States started strong and finished strong, amid criticism that they were not playing offensively enough and that they lived by their defense. Now they are world champions and they can put that criticism to rest and celebrate their grand achievement.