It was never supposed to be easy when the United States traveled to Costa Rica, but it wasn’t supposed to go like this either. The US travelled to San Jose, Costa Rica having never won a World Cup qualifier there, posting an 0-8-1 record in nine previous attempts. Nevertheless optimism was high that on the heels of a home loss to Mexico the USMNT could respond and pick up a crucial result.

That is certainly not what happened.

After being heavily criticized for starting the match against Mexico with a 3-4-3 formation, US soccer fans and the media essentially begged manager Jurgen Klinsmann to stick with his 4-4-2 formation for this match. Klinsmann obliged and well, you know the saying, be careful what you wish for?

Similar to away games in the Champions League, playing a 4-4-2 formation in an away game during CONCACAF’s World Cup qualifying is always going to be a risky proposition. Having just two midfielders in the middle of the park can leave you exposed if you don’t control the ball, and that’s exactly what happened.

Michael Bradley failed to assert any presence on the game and Jermaine Jones was often lured out of position, which stretched and exposed the US midfield. Jones, who prior to the Mexico match hadn’t played 90 minutes since July, looked gassed from the start, and his inclusion in the starting XI for both matches is certainly fair to question.

Nevertheless, it looked as if the US was going to be able to make it to halftime with the score even. But then one mistake led to another and Costa Rica was able to take advantage.

John Brooks, who struggled mightily in his first ever game in Central America, turned the ball over. Timmy Chandler, who started his second straight match over fan favorite DeAndre Yedlin at right back, failed to even run back on defense. Center back Omar Gonzalez who had to cover for Chandler’s absence, sauntered over to Christian Bolanos, never even attempting to pressure him. This allowed Bolanos all the time in the world to put in a perfect cross to Johan Venegas who beat Brad Guzan for the first goal.

Yes, John Brooks was beaten to the ball by Venegas, but Brooks was late because he still had to cover the middle. At the time of the cross, there were two players behind Brooks who were unmarked. This wasn’t so much on Brooks as it was a complete defensive breakdown from everyone.

At halftime, manager Jurgen Klinsmann opted to make zero changes, which even at the time was questionable. The result was a disaster. Costa Rica struck three times within 10 minutes to take a 4-0 lead.

By the time it was 3-0 the US looked like they had given up, and it was hard not to be appalled at the effort.

Staying true to themselves, before the game was even complete US fans took to twitter to call for the firing of manager Jurgen Klinsmann, as they do every time the team falls behind in any match. Klinsmann was far from perfect, his decision to start Jones over Kljestan and stick with Omar Gonzalez at the back stand out, but the players need to share the blame as well. 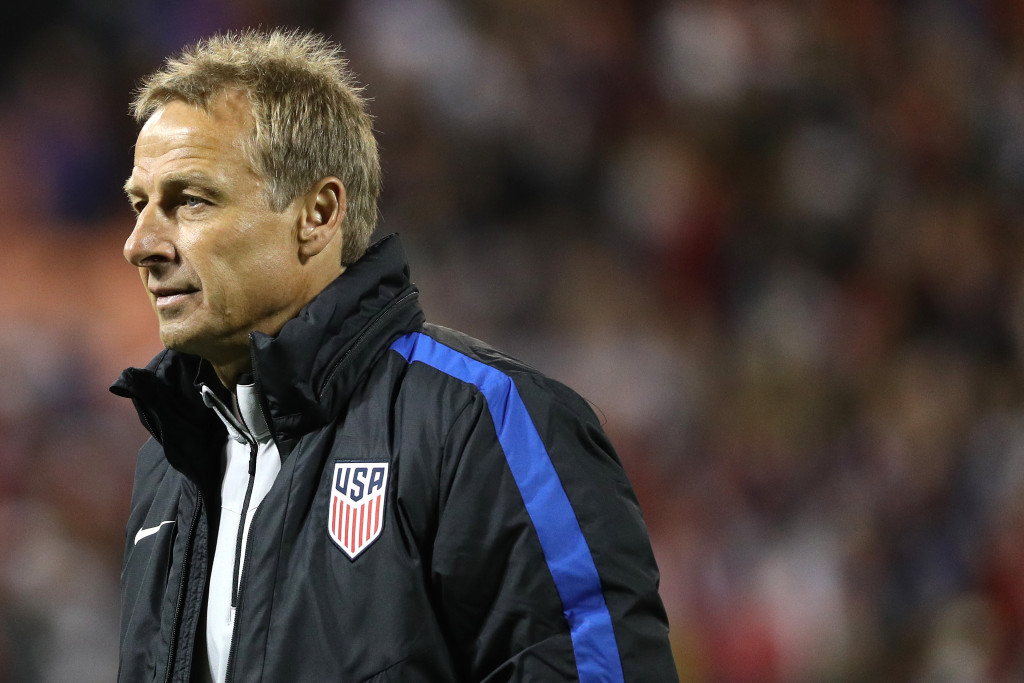 WASHINGTON, DC – OCTOBER 11: Head coach Jurgen Klinsmann of the United States looks on after playing against New Zealand during an International Friendly at RFK Stadium on October 11, 2016 in Washington, DC. (Photo by Patrick Smith/Getty Images)

John Brooks, who the media and fans agreed was the best US player at the Copa America, had his worst game in a US shirt. Michael Bradley was terrible for the second game in a row, but slipped by once again as all the criticism fell onto the manager.

Mistakes at the back line were plentiful for the United States Tuesday night, as they were under constant pressure from Los Ticos. The main reason for that pressure though, was Bradley and Jones’ inability to maintain any possession in the midfield.

The US will now look to turn the page when they face Honduras in their next World Cup qualifier in March. The long layoff is certainly not going to make the doom and gloom feeling go away immediately, but it’s important to remember the US is far from out of this.

The Hex is an ultra-forgiving World Cup qualifying format. Four of the six teams advance to the next round. Three of them go directly to the World Cup. Finishing in third place gets the exact same prize as finishing in second. Slip ups are always going to happen along the way.

Back in March, the US lost 4-0 to Guatemala, putting them in danger of not even reaching the Hex. The team responded with a 4-0 win, qualified for the Hex easily, and even finished fourth in the Copa America last summer.

If there’s one staple of the Jurgen Klinsmann era it’s that the US always seems to rebound, and things always end up OK.