The USMNT continues their path to Russia 2018 by heading to Guatemala City to play Guatemala in the Estadio Nacional Mateo Flores. The USMNT currently sit in first place in Group C of CONCACAF Qualifying on goal differential, while Guatemala is just one point away from reaching both Trinidad and Tobago and the U.S. for the top spot.

While the USMNT is heavily favored in this match, being that the United States has not lost to Guatemala in 28 years, going 15-0-6 against the Central American country. The last time they lost a game to them was 1-0 in a friendly game in Guatemala City in 1988. However, that isn’t good enough for head coach Jürgen Klinsmann.

“It will be very difficult to get 3 points. When the game starts tomorrow, previous results don’t matter at all … We’ve watched Guatemala and see what the new coach is trying to do. He has a young team full of energy that will make it difficult,” said Klinsmann about the streak and about the strength of his opponent.

With that said, Klinsmann has a great depth in every position and all eyes will likely fall on the goalkeeper position with Tim Howard making his return to the USMNT, as well as to Major League Soccer. However, the question is: Will he get the start? 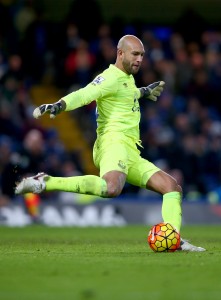 Brad Guzan has been solid against the Guatemalans ever since he made his debut against Guatemala. He has never conceded a goal to Guatemala going 3-0-0 against los Chapines, and that might factor in his decision to start Guzan over Howard, but we will have to see.

Not to mention, the attacking side of the USMNT also raises some questions as Jozy Altidore is set to make the start, as he is freshly recovered from his injury, we might see Bobby Wood lead the attack for the United States.

Clint Dempsey will also be key to the U.S. as he is the leading scorer against los Chapines. Dempsey has scored five goals in eight games against Guatemala, with four coming in the last three games against them. Look for him to start in midfield and to create some trouble up top, as he will most likely try to add to his tally against the Guatemalans.

The Guatemalan side has some dangerous players on their squad, as well as some familiar faces to MLS fans with Marco Pappa (Rapids), Moises Hernandez (FC Dallas) and Rodrigo Saravia (Crew SC). Dempsey, Pappa’s teammate at Seattle for two years, told ussoccer.com, “He’s a player with a lot of quality — you have to watch him on set pieces and also he’s very skillful and has a really good left foot … You need to make sure you’re aware of that and try to do a good job of limiting his touches in the attacking third.”

Another piece to keep an eye out for on Guatemala’s squad is their veteran keeper, Ricardo Jerez, who plays for Colombian side Alianza Petrolera. He is a solid player, and he is considered to be a staple in the team, so look for him to keep Guatemala in the game, especially if the speedy Wood and powerful Altidore are on top for the USMNT.

It will be a tough task at hand for Guatemala, especially if they entertain any idea of getting three points over the USMNT. And if history is a telltale sign of how this game will go, then los Chapines will surely have a difficult time against the Statesmen.