This weekend saw a lot of qualifying activity for both the 2016 and the 2018 FIFA World Cup. At this point, most results are predictable (England over San Marino, 6-0), but some wild upsets also pop up from time to time. Do we have a new golden generation in Iceland? Is the Netherlands done for? And what happened to Jamaica?

England dominates, Belgium dispatches Bosnia, and the Welsh continue their mad ascension up the FIFA table. There were a few unexpected draws, but four games really stick out as notable from this weekend. Also… 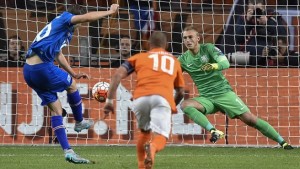 Gylfi Sigurðsson (L) of Iceland scores the opening goal with a penalty kick during their UEFA EURO 2016 qualifier against Netherlands. Getty Images.

This stage of CONCACAF is a home-and-home series to qualify for the group stage. One bad performance here, and you’re going home.