While the history of the FIFA Women’s World Cup finals are just six matches strong, unlike the men’s counterpart it has been full of entertaining, memorable games. Games that have stood the test of time and unlike the men’s side, have actually all lived up to billing.

Just one match has failed to produce a goal in the first 90 minutes, and overall the final matches of the Women’s World Cup have been worth tuning in for every time.

Given the tough task of picking between six great matches, here is our ranking of each and every Women’s World Cup final to date. Enjoy!

The second women’s World Cup provided what has been the largest margin for victory in a final, with Norway beating Germany 2-0. In front of a crowd just over 17,000 inside Sweden, the Norwegian side managed two goals in a three minute span towards the end of the first half and that was all this game needed to be over.

Germany wasn’t quite the power it is today, where a two-goal deficit wouldn’t be so insurmountable. Not even the great Birgit Prinz could find the back of the net for Germany, and believe it or not it was just her first of five World Cup appearances for her.

The 2-0 scoreline was a fitting ending, as Norway managed 17 goals in its group, while Germany mustered just nine in group stage play. Norway may have had the best defensive play of any champion though, giving up just one goal (in a 3-1 win over Denmark in the quarterfinal) the entire tournament.

It wasn’t a good debut at all, as Germany dominated the run of play and dominated the scoreline. It was a shocking result too, because Brazil got to the final by crushing the powerful United States squad 4-0 in the semi-final and letting only two goals in the entire tournament leading up to the final.

Germany was reigning champion and featured one of arguably the best defenses in any women’s World Cup. So, why is this one near the bottom of the list?

Well, it took an entire half for things to really get going. Birgit Prinz featured prominently again in a final, scoring the opening goal (which was also the game winner) in the 51st minute. Simone Laudehr scored the final nail in the Brazilian coffin in the 86th minute, as Brazil scrambled late to try to force extra time.

The first Women’s World Cup final proved to be one of the best to date. Not only was it an interesting matchup, as Norway’s 1991 side is the only side to reach the final after not winning its group. The United States dominated play all the way to the final, routing Chinese Taipei 7-0 in the quarterfinals and beating up on Germany 5-2 in the semi-final.

As for the game itself, the action came early on in the match for both sides. Veteran Michelle Akers opening up the scoring with a goal in the 20th minute, only to see Norway tie it right back up at 1-1 in the 29th minute.

Akers would put the United States in to the history books, scoring her brace in the 78th minute to seal the championship in the first ever Women’s World Cup. For the beginning stages of the women’s game, this match featured some good action and dramatics. Not a bad way to go when talking about the things anyone who isn’t a fan of either team would want to see.

This was the second final to feature the Germans, and also the second to feature two European sides. It was also a strange World Cup, as China was supposed to host its second event, but due to health concerns at the time the even was instead staged in the United States for the second competition in a row.

Sweden, appearing in its first Women’s World Cup final match, struck first. Hanna Ljungberg put one in the back of the net in the 41st minute. However, it was a short-lived lead.

Maren Meinert tied things up just minutes in to the second half, netting Germany’s first goal in the first minute of play of the half. The 1-1 scoreline stayed the same through the final whistle of regulation, and that’s where this game becomes famous.

With the golden goal rule still in effect in the women’s game, Germany secured a World Cup title thanks to a defensive substitution in the 86th minute — Nia Künzer. It wouldn’t take long for her to make a huge impact either, as Künzer put one in the back of the net in the eighth minute of extra time and give the Women’s World Cup the only golden goal in its history.

There isn’t a more iconic image in the history of women’s sports than the one created by the winning kick of the 1999 Women’s World Cup final. The name of Brandi Chastain, a defender for the United States women’s national team, will forever live on after she secured the United States a second World Cup victory. 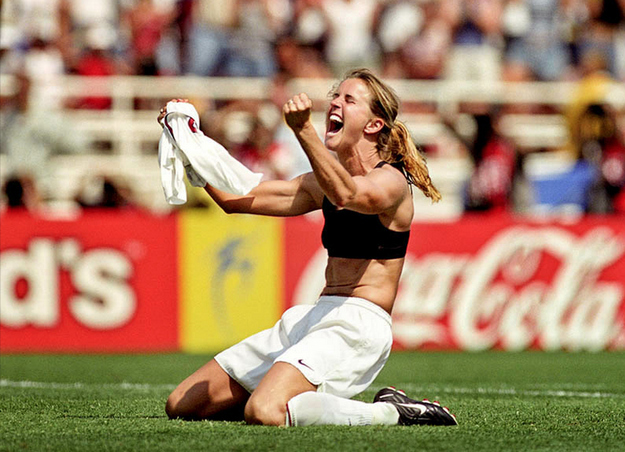 As for the game itself, the USWNT and China were scoreless through regular time and 30 minutes of extra time, necessitating a penalty shootout for the first time in a Women’s World Cup final. While it may be tempting to say a 0-0 score through 120 minutes of play was boring, that couldn’t be further from the truth.

China, which led the World Cup in goals coming in to the final (19) had just two shots on net in the 90 minutes. It had three in the 30 minutes of golden-goal overtime, including what should’ve been the game-winning header from defender Fan Yunjie. Instead Kristine Lilly managed to get high enough to send the would-be winner over the bar.

The dramatics lasted all the way through the penalty shoot out, as the two teams went make for make through the first two rounds. However, China’s Lui Ying steeped up third and everything changed. U.S. goalkeeper Briana Scurry dived left to block Liu Ying’s kick and that meant all the US had to do was keep making their PK’s.

Following makes from Carla Overbeck, Joy Fawcett, Kristine Lilly and Mia Hamm it was Chastain’s turn. She buried the final shot calmly past the Chinese goalkeeper and the celebration was on.

Not only was the game good (maybe not if you love offense) from a strategic standpoint, the United States winning the competition on its home soil in front of a sold out Rose Bowl and in front of a massive television audience lifted the women’s game to heights it hadn’t seen before.

That tournament, that game and that final moment are iconic in sports history. Without this event one has to question where the women’s game would be today. For those reasons this final is near the top on our list. There’s just one bigger final though…

Shocking not to see the United States’ 1999 win here, right? However, objectively, the 2011 matchup that went to extra time and penalty kicks was a better overall matchup — just with a more bitter outcome if you are a United States fan.

Unlike the 1999 final, which also featured penalty kicks, this game had some scoring and high powered offense to it. However, it took awhile for the scoring action to get going. After a point-blank miss and Abby Wambach hitting the post, it was Alex Morgan who redeemed herself after hitting the post earlier in the game too.

Morgan struck one past the Japanese goalkeeper in the 69th minute, putting the USWNT up 1-0. Japan struck back with a goal of its own in the 81st minute. However, the real action came in extra time. That’s because following a Wambach goal in the 104th minute, the United States just couldn’t hang on the remaining 16 minutes.

Japan got one back at the death of extra time, with midfielder Homare Sawa leveling the game once again in the 117th minute.

Penalty kicks were a disaster for the USWNT this time around though, as Japan took it 3-1 and lifted the trophy for the first time.

It also served as a major wake up call to the United States women’s national team program that it may be slipping. After winning in 1991 and 1999, the group had failed to reach the final twice and lost the final here.

Japan also signaled there may be another power in play besides the usual suspects of the United States, Germany and Brazil. Only fitting that these two sides are also meeting up in the final at this Women’s World Cup as well.