(Throughout the week, we will go through every group and let you know what to look for and what to expect in the Women’s World Cup)

The story of this group comes from Europe. England and France both went a perfect 10-0 in UEFA qualifying, two of the four teams to do so (with the others being Germany and Sweden). England only allowed a single goal, and both clubs finished with a goal difference of +51. Also, just this past fall, France defeated world number one Germany for the first time. Both of these teams seem primed to wreck this group then storm deep into the knock-out stages. However, neither of these teams saw much competition in the UEFA qualifiers, so all that’s left for them is to prove their quality against the world’s best…which also happens to be each other.

Group F is one of two groups with all four teams in the FIFA rankings top 30, and also one of two with multiple teams in the FIFA rankings top six. Neither Colombia nor Mexico have ever won a game at the Women’s World Cup, something they would both love to remedy. Last time around in 2011, Mexico earned a draw with England. They will be hoping to build on that in 2015. 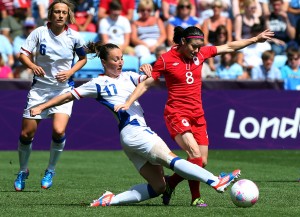 COVENTRY, ENGLAND – AUGUST 09: Diana Matheson of Canada is challenged by Gaetane Thiney of France during the Women’s Football Bronze Medal match between Canada and France, on Day 13 of the London 2012 Olympic Games at City of Coventry Stadium on August 9, 2012 in Coventry, England. (Photo by Stanley Chou/Getty Images)

This pair led the UEFA qualifiers in goals and assists respectively with 13 each in just 10 total games. The French media often refers to Thiney as “the female Zidane,” both because of her gifted midfield playmaking and Algerian ancestry. But don’t be fooled; Nécib is her own player and has evolved her own unique game. Both Thiney and Nécib are veteran players in the prime of their soccer careers. Having played with the national team since 2004 and 2006 respectively, this may be the last chance for each to win the World Cup. They will be hungry for victory. 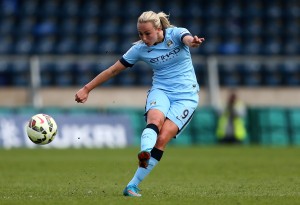 HIGH WYCOMBE, ENGLAND – MAY 04: Toni Duggan of Manchester City in action during the Women’s FA Cup Semi Final match between Chelsea Ladies and Manchester City Women at Adams Park on May 4, 2015 in High Wycombe, England. (Photo by Ben Hoskins/Getty Images)

Duggan has notched 14 goals in 25 caps thus far in her young career. She has the magic to take over a match, including two hat tricks and a brace in World Cup qualification. If Duggan can find space against tougher clubs like France, then she could easily win the tournament’s golden boot. Honestly, she could be the generational striker that England for which has been searching, just as long as she stops hugging Louis Van Gaal and dressing in blackface.

In fact, winning this group will set one of these clubs up for a brutal second knock-out stage matchup against world number one Germany, while the runner-up here will be likely paired against Canada. Neither match is each, but I’d prefer the Canadians even on their home soil turf.

Teams to Advance: France and England

Barring any sort of miracle or complete collapse, these two European rivals should advance with little problem. Both the Three Lionesses and Les Blues are most likely too quality and too professional for either Colombia or Mexico to mount a serious challenge. However, Colombia is a team that could surprise. They went unbeaten in South American qualifiers (including a draw against Brazil). In any other group, Colombia could easily come out as the runners-up, so don’t expect a total cakewalk.