International breaks come hard and fast at the start of the league Calendar. There has been one every month as the World Cup Qualifying landscape has begun to take shape. Now that November is halfway done, and qualifying is now taking a break until March, it’s worth looking at some of the major storylines from around the world.

Qualifying has gone well for the usual suspects. France, Spain, England, Germany, and Belgium all sit in first place in their groups. Germany, Switzerland, and Belgium are the only countries with a perfect record so far. Germany demolished San Marino this weekend, 8-0, While Belgium crushed Estonia 8-1. Switzerland, who’s perfect record is holding off Cristiano Ronaldo and Portugal, beat the Faroe Islands

England got the better of Scotland with a 3-0 win at Wembley Stadium. Scotland had to have liked their chances to at least come second in group F, but as it stands they’re in fifth and are unlikely to make it to Russia at this point.

Spain is in a dogfight with Italy for the top spot in group G. Both nations picked up 4-0 wins this week against a pair of minnows. They both sit with 10 points but by virtue of goal difference Spain has claimed the top spot so far.

Other group leaders include France, who are holding a three-point lead over the Netherlands. Also, Poland, Croatia, and the Republic are in a spot for Automatic qualification fo Russia 2018. All nine group winners advance while the top-8 runners-up will play in a two-leg playoff next November. 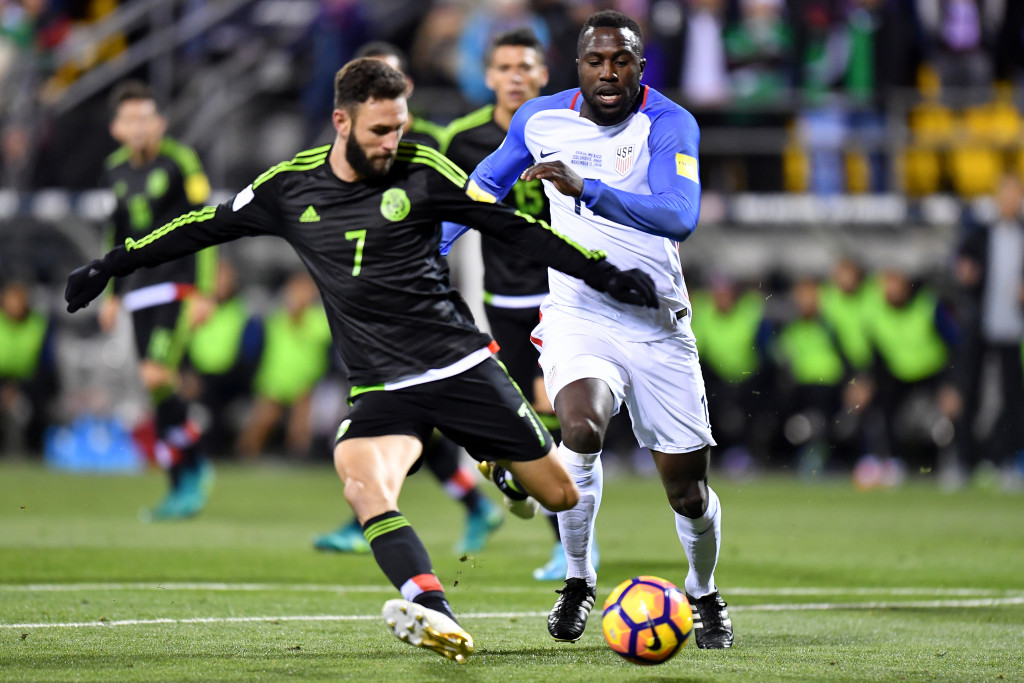 COLUMBUS, OH – NOVEMBER 11: Jozy Altidore #17 of the United States defends against Miguel Layn #7 of Mexico in the first half during the FIFA 2018 World Cup Qualifier at MAPFRE Stadium on November 11, 2016 in Columbus, Ohio. (Photo by Jamie Sabau/Getty Images)

The Hex is in full swing now as everyone has now played twice. For the USMNT, they would probably like to forget about those two games in a hurry. The start of the Hex has been a disaster for Jürgen Klinsmann as the US lost both games this week. One was a heartbreaker to Mexico and the other was a 4-0 hammering at the hands of Costa Rica. The USMNT still has plenty of time to turn it around, as the top four teams have a chance at qualification. The top three are automatically in, while fourth place plays a representative from the Asian federation for the final spot.

Luckily for the States, only Costa Rica has been perfect this round. Mexico, possibly the USA’s main rival, dropped points with Panama on Tuesday and Honduras lost to that same Panama team. Two teams, Mexico and Panama, sit on four points after two games. Honduras right behind them with three points. Costa Rica has six, and the US and Trinidad and Tobago are in the basement with zero. Not ideal for Klinsmann, but there’s time. 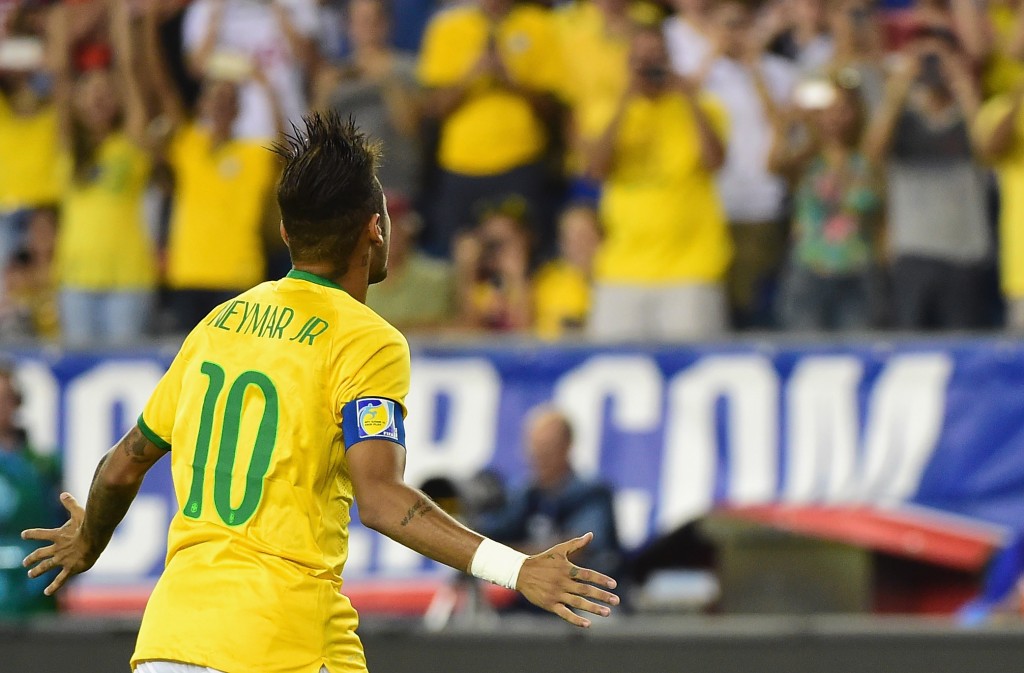 FOXBORO, MA – SEPTEMBER 08: Neymar #10 of Brazil reacts after scoring a goal during an international friendly against the United States at Gillette Stadium on September 8, 2015 in Foxboro, Massachusetts. (Photo by Billie Weiss/Getty Images)

South America’s qualifying is unique because instead of various stages, the continent’s confederation just puts all ten teams into a single group and let them slug it out, with the top four earning automatic qualification and the fifth place team heading to play the top team from Oceania in a playoff.

After 12 matches, Brazil sits pretty comfortably at the top with 27 points, that’s 9 points clear of a position that would see them fail to qualify. They picked up a win Tuesday against Peru, but the big story was their 3-0 win against historic rival Argentina. Argentina has had a tumultuous qualifying campaign so far. They’re in fifth place which would be that playoff position. Ideally, the 2014 runners up want to be in an automatic qualifying position. Lionel Messi and his compatriots were in sixth before beating Colombia on Tuesday, so it could be worse.  Not so for Colombia, however.

Rounding out the top four after Tuesday’s results are Brazil, Uruguay, Ecuador, and Chile. All four of those teams picked up wins over the past week.

Asia is currently in their third round of qualifying. This round is divided into two groups of six, with the top two in each group earning qualification to the 2018 tournament. It’s a tight race for those top spots in both groups. Iran and Saudi Arabia own both top spots with South Korea and Japan right behind each respectively. Iran has 11 points, while the other three are all on 10 points. South Korea gained some ground on Iran however when they beat Uzbekistan this weekend while Iran drew with Syria. In group B, Japan beat Saudi Arabia 2-1 to erase the gap to first place, but still fall behind because of goal difference.

The third place teams in each group will meet in a playoff next October, and the winner will go on to play the fourth-place team from CONCACAF a month later. As it stands, Australia and Uzbekistan are the two third place teams. Qualifying has not been easy for Australia so far, but with nine points they are very much in striking distance for one of the top spots. Drawing with Thailand this weekend isn’t going to help, however.

The African confederation has just started their third round of qualifying as well. Their system at this point is very straight forward. Five groups of four teams apiece are fighting for five spots in the World Cup. Each group winner punches a ticket to Russia next summer.

The current group leaders are DR Congo, Nigeria, Ivory Coast, Burkina Faso and Egypt. Nigeria is looking particularly good as they’ve already opened up a four-point lead with a big win over Algeria this week. The big story might be Ghana, however, as the 2010 quarter-finalists are in third in their group with only one point. It’s still early and they won’t play another qualifier until August, so there is plenty of time to sort things out.

Entering the final group stage, the Oceania confederation is looking to see who will play in a final playoff match before taking on the CONMEBOL fifth-place team. The two groups, made up of three teams each, are scheduled a little differently. In group A, New Zealand and New Caledonia have each played home and away, while in Group B Tahiti and the Soleman Islands have each done the same. In both groups, Papua New Guinea and Fiji have yet to play. As it stands, New Zealand and Tahiti are in first place of their respective groups.

Each round of qualifying features just one matchup in each group playing both legs. After each country has played four games against the other two teams in the group the two first place teams will meet for a home and away playoff. Oceania is the only confederation in the world that isn’t guaranteed to have a team heading to the World Cup.