Manchester United’s traditional red and white home kit is set for this year. 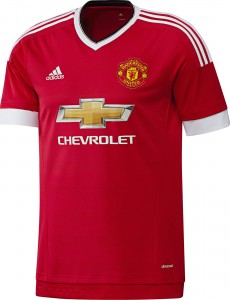 This is what I have against Manchester United’s kits, that freaking oversized eyesore of a Chevrolet logo in front of the kit. I mentioned in the Best Kit article, the kit sponsor goes a long way in determining whether or not a kit looks good or not. Is Chevrolet that protective of their “brand” that they must not compromise the look of their logo? First of all, the logo is huge and second, the “bowtie” logo is filled with gold and silver which doesn’t look good with red. Even making the logo red with a white border will be an improvement. As long as Manchester United have Chevrolet as kit sponsor (until at least 2021), they are not going to have a good looking kit unless that logo changes. 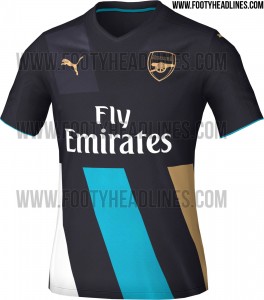 Now we’re really getting into the terrible looking kits. The bottom of this kit looks like a horrible tasting piece of sweetwater taffy. The white, blue and gold don’t really go together and just looks strange. Just like Manchester United’s third kit, this kit hasn’t been released yet so we’re going off of Footy Headlines.

Ah, flourescent green has returned and returned with force at Manchester City. 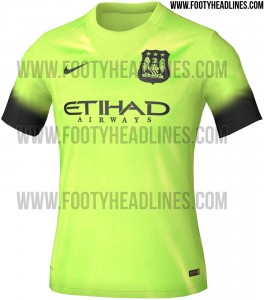 I have to admit, I was originally going to put Manchester City’s away kit on the list. When I wrote about it and Man City superimposing the moon on their kit, I thought it looked terrible and was going to be one of the worst looking kits out there. I have to say I have gotten used to that kit and it looks alright. I’m not going to say it’s great and I’m not willing to pay for that kit but it’s grown onto me. This though, this is just bad. Again, like Manchester United and Arsenal’s third kit, Man City’s third kit hasn’t been released. For all that is holy, let’s hope this is a cruel joke and the real thing is something completely different.

Fluorescent green and blue clash on this Swansea kit. 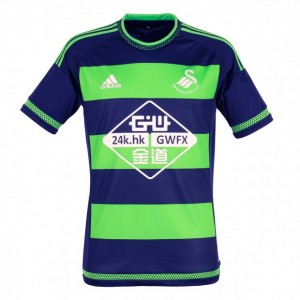 Yeah like I said, fluorescent green just doesn’t mesh well. On this kit, the blue and green with the white sponsor logo looks like it’s intentionally supposed to not match. It looks like a mess but not as much as a mess as the winner. 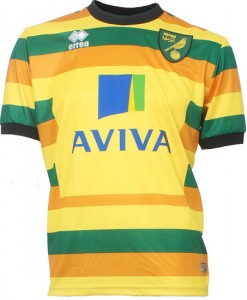 I had written about this kit earlier and this is just on its own level of bad. Whether it’s the different color stripes, the oversized yellow square in which the sponsor log goes in or the actual sponsor logo itself, this kit is just a disaster on so many levels. Norwich City may be fighting for relegation this season but they won one thing this year. They have the worst kit in the EPL this year.