International football is tricky. Teams are bound by strict restrictions on who can play for them and if those players aren’t up to snuff, there’s really nothing you can do. Sometimes a country gets a once in a generation talent, but no other good players to support him. Think Ryan Giggs’ entire Wales career.

Other times a country gets an entire team of once-in-a-generation talent all coming up at the same time. With that much quality they can go on to dominate international football for many years. Think Spain winning three straight tournaments from 2008-2012.

But then there’s pretty much everyone else. A country hits a nice group of players for a few years but they either slip up in a short window for glory or simply just came through at the exact wrong time. It’s a great team, but ultimately they have no trophies to show for it.

Despite only being 16 years into this new century, there have already been several great international teams that never managed to win. Here are the five best of them. 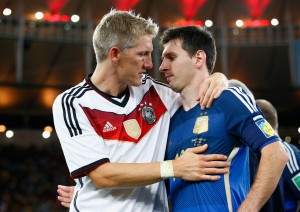 There used to be a belief that Argentina was just Lionel Messi surronded by a bunch of players who just weren’t good enough to support his greatness. By 2014, Argentina had a very talented team to support Messi which included the likes of Angel di Maria, Gonzalo Higuain, and Sergio Aguero. They made the final of 2014 World Cup, losing in extra time despite having the better of the chances in in the regulation 90 minutes.

It seemed like the 2015 Copa America would be theres to lose. Once against they progressed through to the final where they once again failed to score. They ended up losing to Chile on penalties leaving Messi still without a major international trophy. 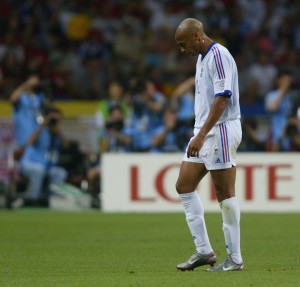 BUSAN – JUNE 6: Thierry Henry of France is sent off during the FIFA World Cup Finals 2002 Group A match between France and Uruguay played at the Asiad Main Stadium, in Busan, South Korea on June 6, 2002. The match ended in a 0-0 draw. DIGITAL IMAGE. (Photo by Ben Radford/Getty Images)

It feels a little wrong including France on this list because the core of this team did actually win some tournaments but the fact that they failed so spectacularly merits a place here.

France won the 1998 World Cup and the 2000 European Championships. They returned almost the same team for the 2002 World Cup where they finished dead last in their group, failing to score a goal. How in the world does that happen? A thigh injury prevented star midfielder Zinedine Zidane from playing in their first two group games, but for a team with Thierry Henry, David Trezeguet, Djibril Cisse, and Patrick Vierra they should have been able to muster up at least one lousy goal. The 2002 French team now goes down as the team with the worst performance for a defending champion in World Cup history. 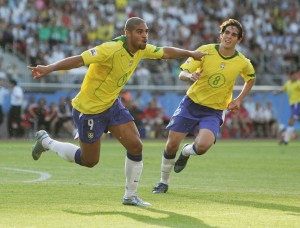 Another team where technically the core of  the team had already won but how the hell did this team not win the 2006 World Cup? On paper this team was stacked. They had Ronaldinho, who during the 2006 World Cup was being marketed as the best player in the world, Kaka, who was actually the best player in the world back then, a getting-bigger-but-not-quite-fat-yet Ronaldo, and Robinho among several other great players.

Brazil breezed through the group stage of the competition and easily swept away Ghana 3-0 in the round of 16. You can easily argue that their first test of the tournament came in the quarterfinals when they faced France, and they’d go on to lose 1-0. Go figure.

Brazil hasn’t come close to winning the World Cup since. 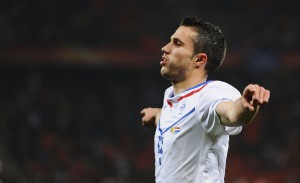 This is your classic case of a team bringing up a generation of stars at the exact wrong time. The Netherlands advanced out of their group at the 2006 World Cup and by 2008 they had some bonafide studs on the team. Robin van Persie, Dirk Kuyt, Wesley Sneijder, Rafael van der Vaart, Mark van Bommel, and Arjen Robben were all coming into their own. Behind them in 2008 were the very steady hands of Edwin van der Sar, fresh off winning the 2008 Champions League. In 2010 it was the ver capable hands of Maarten Stekelengberg.

The Dutch rolled through their group at Euro 2008, including a 4-1 win over 2006 World Cup finalist France. They were upset in the quarterfinals by Russia but in 2010 they fulfilled their potential to make it all the way to the World Cup final. Unfortunately they just came around at the same time that Spain was dominating the entire world and winning everything in sight. 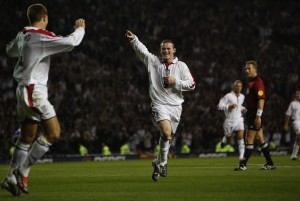 Of all the English teams that ended in disappointment the 2004 squad will always be the one that got away. This was by far the best English squad ever assembled and it still boggles my mind that they didn’t win.

The squad had John Terry, Jamie Carragher, Frank Lampard, Ashley Cole, Steven Gerrard, Paul Scholes, and Wayne Rooney. Those were the best players on the teams that would go on to dominate the Champions League over the next five years. They had teenage sensation Wayne Rooney who was ready to provide just the spark that England’s “Golden Generation” needed to get over the hump.

They were ultimately undone by two things. Manager Sven-Goran Eriksson had no idea how to handle having all three of Frank Lampard, Steven Gerrard, and Paul Scholes at his disposal. Since he was insistent on playing a 4-4-2 formation (like everyone did back then) he ended up deploying Scholes, the best of the three central midfielders), on the left wing. A complete waste of his talents. The team lost it when Wayne Rooney went down with a foot injury against Portugal as beyond Michael Owen their striking options were lacking, though Eriksson could have played Scholes behind Owen, but of course he didn’t do that. 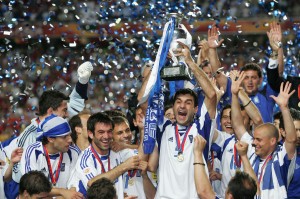 LISBON, PORTUGAL – JULY 4: Traianos Dellas of Greece lifts the trophy during the UEFA Euro 2004 Final match between Portugal and Greece at the Luz Stadium on July 4, 2004 in Lisbon, Portugal. (Photo by Alex Livesey/Getty Images)

Seriously how in the world did they let Greece win this tournament? Euro 2004 was a glorious chance not just for England to win a trophy but for everyone. France was in their last hurrah for many of their 1998 and 2000 World Cup and Euro winners, Portugal, some good older players and a young up and coming Cristiano Ronaldo, was playing on home soil and made the final to boot, Italy were two years away from winning the World Cup and couldn’t even make it out of their group in this one. Germany and Spain (admittedly this was before the current versions of Germany and Spain were formed) both failed to make it out of their group.

This tournament was there for the taking for any of the traditional powers that always seem to come up short. I guess then it’s fitting that they all managed to come up short and let Greece walk away with it.