The January transfer window has been subject to a lot of debate on 32 Flags recently as so far the big clubs and players have remained pretty quiet. While that may not be changing any time soon, the transfer rumors started to heat back up this week, with many big names re-entering the mix after a down week last week.

The news out of Old Trafford is that David de Gea is staying at Manchester United. #SSNHQ pic.twitter.com/lAz572Uq9I

This didn’t seem like it would be a story in January but then it became one. Let’s break this down. It’s no secret that Real Madrid want David de Gea. Last week they were slapped with a transfer ban for the next two windows (this summer and next winter), meaning if they want their man they would have to get him now. It’s no surprise that de Gea won’t leave United during January as no deal would really make sense. United would once again demand Kaylor Navas in return, and with de Gea cup-tied in the Champions League Real would need to use their second choice keeper in that important competition.

According to ESPN FC Real still plan on signing de Gea this summer. Michael Delaney is reporting that the higher ups at Real are confident that Los Blancos will win their appeal and the ban will be lifted. ESPN  is also reporting that de Gea’s Manchester United future hinges on whether de Gea receives the number 1 shirt for Euro 2016 this summer as the goalkeeper believes he may need to move to Real Madrid to get the status and visibility to become Spain’s first choice keeper.

None of this is surprising to me at all. I always thought that United played hardball last summer, knowing they would be able to force de Gea to sign a new contract and I always thought that de Gea signing that contract was just so United could command a fee when they sold him to Real the following summer. I do believe de Gea is happy in Manchester but there is that stigma in Spain that their starting goalkeeper needs to come from either Real Madrid or Barcelona. As of now, Iker Casillas is still ahead of de Gea in the pecking order, despite the fact that Casillas has been terrible and de Gea is a top five keeper in the world. If the status quo doesn’t change this summer, then it’s certainly easy to imagine de Gea engineering a move back to Spain.

A little bit of Chelsea news as The Daily Star is reporting that the honeymoon period between Chelsea and Pedro is over, with the winger eying a summer move away from the club. Meanwhile ESPN FC is reporting that Chelsea are close to signing former AC Milan striker Alexandre Pato. 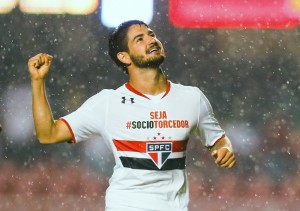 SAO PAULO, BRAZIL – MAY 10: Alexandre Pato #11 of Sao Paulo celebrates their second goal during the match between Sao Paulo and Flamengo for the Brazilian Series A 2015 at Morumbi stadium on May 10, 2015 in Sao Paulo, Brazil. (Photo by Alexandre Schneider/Getty Images)

No surprises here. Pedro has seemingly fallen out of favor at Chelsea very quickly, in part because he’s been ineffective and in part because the man he was brought in to replace, Willian, has been Chelsea’s best player this season. As for Pato, this move makes all the sense in the world. Pato had sky high potential when he was with Milan yet somehow has been banished to the abyss of Corinthians in Brazil. Pato could be the best big name striker that’s not cup tied in the Champions League available on the market, and would be a great fit for Chelsea since they have roughly zero in form or fit strikers. (Update: The Daily Express is reporting that Pato is a done deal worth £8 million).

Earlier this week I had read that Vidic was signing with the Chicago Fire in the MLS so this is a bit out of left field.

Early reckonings in the US that Nemanja Vidic set for #MLS & Chicago Fire after leaving Inter Milan.

Either way he won’t be heading back to Old Trafford as many Manchester United fans hoped, despite the clubs need for a senior presence on their back line and reinforcements at center back.

West Bromwich may finally be ready to sell out of favor striker Saido Berahino with The Sun reporting that club will sell him, but for no less then £30 million.

Hey West Brom, can I entertain you for a second with the story of Charlie Austin and QPR. QPR completely overvalued Austin last summer leading to the striker spending the first half of this season wallowing away in the Championship before QPR were able to sell him to Southampton for a measly fee reported to be around £4 million.

West Brom. Don’t do this with Berahino. He’s a great talent and he could help your team, but at the end of the day, Tony Pulis doesn’t like him and doesn’t play him. He’s a bright English talent that could help the English National team if he got first team football, don’t overvalue him and end up getting nothing. Just sell him for around £15 million and everyone can go home happy.

The Manchester Evening News says that Victor Valdes will be joining Standard Liege on loan, ending his spell at Manchester United.

Thank god Valdes is managing to get out of Manchester United. The way Louis van Gaal has treated the Spanish goalkeeper this season has been nothing short of despicable. It’s not really surprising given the way van Gaal has treated all of United’s Spanish players this season (including saying things about de Gea which may or may not have been true as part of a contract ploy). Van Gaal didn’t even give Valdes a squad number this season and refused to let him train with the first team. It’s nice to see Valdes getting a chance at a fresh start.

Valdes posted a goodbye message on social media to Manchester United fans, all but confirming his departure.

This was a dumb headline. When asked if Spurs would welcome back Gareth Bale Pochettino should have just said “duhhhh.” It’s not happening and never will. The main gist of this story is that Marca has learned that Spurs have the right of first refusal on any bid to bring Bale back to the Premier League. Though Spurs are notoriously stingy so it’s hard to see them breaking the bank over Bale.

We’ll be back for a final wrap up next week.