Chelsea are on the verge of a huge shock signing with the news this morning that they have agreed a £21m deal with Barcelona for winger Pedro.

This will come as a shock to many as Pedro had been heavily (and we mean heavily) tipped to join Manchester United this summer. As linked to above, Sky Sports said that personal terms had even been agreed. United clearly wanted the player, but dithered on the price. Now, they will be losing a player who many claim would have made them title contenders. This should be giving you flashbacks of two summers ago when this was very common. In response to missing out on Pedro, Manchester United are now bidding for the even more unlikely Thomas Müller. It’s going as well as can be expected.

MU wanted Pedro and he wanted to go. For a month. Utd didn't meet €30m buy out which Barça were adamant they wanted all along. Very odd. 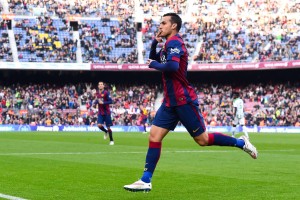 Pedro is now flying into London to complete a medical ahead of his move to the Premier League Champions. Pedro has stated many times that his move away from childhood club Barcelona is not about the money, but playing time. He will certainly get that at Chelsea. He will be expected to slot opposite Eden Hazard on the right side of the Chelsea attack, with Diego Costa between them.

As for Chelsea, they will be getting a player who will add pace, goals and a spark of life to their team. So far this season, Chelsea have managed a grand total of 1 point. The soccer has also looked dire at points. Pedro coming into the squad should be a kick up the rear that Chelsea clearly need as the hangover from winning the league last season wears off.

UPDATE: The deal is now official.