Portugal has finally broken through in the international stage and have won their first-ever hardware in Portuguese football history. The Portuguese can finally put the heartbreak of losing to Greece in the 2004 Euro finals away and rejoice that they can call themselves European Champions.

The future of Portugal going forward from here looks bright, as they showed that they have a rising star waiting to break out and that they are able to win without Cristiano Ronaldo. Some might even argue that once Ronaldo left injured that Portugal played better without him.

Renato Sanches is going to be the future for Portugal going forward, there is no question about it. He has really proved his worth in this Euro 2016, being the youngest Portuguese player since Cristiano Ronaldo to appear in the starting lineup in a Euro final. At only 18 years old, he also won the Euro 2016 Young Player of the Tournament and looks to be a key piece in the middle for Portugal for years to come.

Portugal’s manager, Fernando Santos, might have an old school mentality when it comes to his tactics, but he has really unlocked Portugal’s potential on the defensive side. Since Santos has taken over after Paulo Bento’s sacking after the World Cup, Portugal has only lost six out of their 26 matches. Portugal also seemed to get on a roll as they started what would become their eight-game unbeaten streak in their last friendly before the European Championship, a 7-0 demolishing of Estonia. 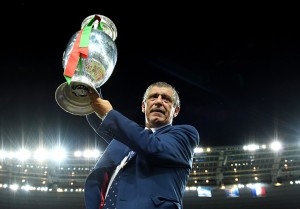 during the UEFA EURO 2016 Final match between Portugal and France at Stade de France on July 10, 2016 in Paris, France.

Santos’ tactics may not be the most attractive football, in fact it’s pretty much a consensus that this year’s Euros featured some of the most unattractive play in history, but they get the job done. When Santos was the manager of Greece from 2010-14, he knew that Greece lacked the talent of the other countries so what ensued was a Greek defensive game that was not pretty to watch, but it got results.

The same thing here with Portugal, in sacrificing entertainment value in order to achieve results, Santos has really looked at what was an underrated Portuguese defense and made the team work around a strong defense that wears down the opposition’s offense and quick counters.

As much as their big three got the job done in front, Portugal’s attacking options are going to be thin going forward as most of their attacking corps is made of up veterans that might see their last action in the World Cup, if they qualify. With Ronaldo, 31, Quaresma, 32, and Nani, 29, getting up in years Portugal will have a problem with who will lead the attack once these names are gone. With Éder being the same age as Nani, this poses further problems as these men scored 89 percent of Portugal’s goals in the Euros.

Rafa Silva, who plays with Braga in the Portuguese Primeira Liga, was the only forward below the age of 25 to be taken to the Euros. However, to say that he will become the next great Portuguese attacker is a stretch, as he remains largely untested so far.

But Portugal did not win this European Championship on offense, it was their stalwart defense that did the job for A Seleção. The veteran center backs in Pepe and José Fonte really shined bright in this edition of the Euros and the young full backs in Cédric and Raphaël really give Portuguese fans hope that they will develop even further and lead the charge for the Portuguese defense, being that they are only 22 and 24-years old respectively.

Again, Portugal will have some gaps to fill as most of their center backs are over the age of 32 and, much like their offensive situation, they have young, untested talent they will need to bring to the forefront and see how they perform for Portugal.

Overall, if they keep doing what works Portugal will look to have a great future going forward, but will have to eventually have their youngsters have some big shoes to fill as this Portuguese team that conquered Europe was a once in a lifetime team.