Liverpool manager Jürgen Klopp spoke about the desire the team has for winning a title, “The longer you don’t win anything, the harder you try. We already know about the desire of our supporters. We know how much they want to win this cup.” Klopp is also looking to win his first trophy in his first year with the reds.

Meanwhile, Sevilla boss Unai Emery also echoed Klopp when talking about the passion the Rojiblanco fans have for their team. Emery told the media, “What we have achieved in recent years is wonderful but you can’t stop there; you have to relive it, you have to experience it again. The Sevilla fans know this: they look upon the club as their second wife or second girlfriend.”

Speaking of Sevilla, journalist Paul Joyce (possibly) has given us a leaked Sevilla lineup as he changed his twitter avatar to how Sevilla might lineup. If this is truly how Sevilla is looking to line up there are a few changes from their last game against Shakhtar as instead of a 4-2-3-1 it looks as if Sevilla is opting for the 4-1-3-2.

In this leaked line up, Timothy Kolodziejczak at defensive midfielder, Steven N’Zonzi replacing Vitolo at midfield, the addition of Grzegorz Krychowiak in midfield as Éver Banega is moved up to play a second striker/ attacking mid position behind Kévin Gameiro. 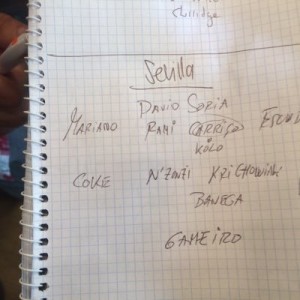 As for the Reds, their predicted lineup looks to be something like Mignolet, Clyne, Lovren, Touré, Moreno; Lallana, Can, Milner; Firmino, Sturridge, Coutinho. With Sakho still suspended Liverpool needs to step up on the defensive side of the ball and with Jordan Henderson back from injury, he has said he is still not fit enough to start, but can maybe play a pivotal role from off the bench.

With the impressive squads these teams have, it is difficult to pinpoint a player that can make a difference from each team. But Sevilla’s star player is definitely Kevin Gameiro, who is in brilliant form thus far. With 16 goals in La Liga and seven in the tournament, Liverpool must defend well to keep the French striker away from the scoresheet. 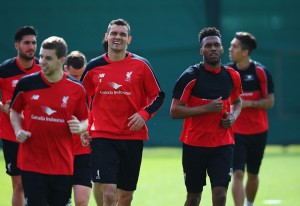 LIVERPOOL, ENGLAND – MAY 13: Dejan Lovren and Daniel Sturridge of Liverpool warm up during a training session at the Liverpool UEFA Europa League Cup Final Media Day at Melwood Training Ground on May 13, 2016 in Liverpool, England. (Photo by Alex Livesey/Getty Images)

Liverpool, on the other hand, has spread the scoring around not wanting to focus on just one player to make a difference. Look for Coutinho, Sturridge, Firmino and Lallana to fluster the Sevilla defense with slick passing and, with all of them scoring this Europa League tournament, the Andalusians will have to keep a watchful eye over all of them.

However, both of these teams have been money in the Europa League somehow and it will be interesting to see which teams show up. We can get a Liverpool that roared against Manchester United and showed valiant heart against Borussia Dortmund or we could get the Liverpool that drew against West Brom and finished eighth in the Premier League. The same thing goes for Sevilla, as both these teams seem to have a Dr. Jekyll and Mr. Hyde complex it will be a mystery as to which team we will get.

But with their respective seasons behind them and only this European cup final to look forward to, all their shortcomings and errors will not matter. All that will matter is that they step into the pitch and try to achieve the ultimate glory in the European stage and a spot in the Champions League group stage as well.