As the European club season enters its climax, every game in every league can make all the difference. For some teams, the last few months can determine the fate of a title race, or the fight to avoid relegation. In some leagues, these races are closer than others. Some teams may have already wrapped up the title, while others might end up going down to the last matchday. We’ve ranked the top five leagues in Europe on their competitiveness.

If you look at this year’s Ligue 1 table, you’ll notice a new name a the top. Monaco is having a terrific season and could be the first team other than PSG to win a title in four years. Things are a little more competitive in France this year, but looking down the table and you quickly notice a disparity. The gap from first place to fifth place is 19 points and the gap from fifth to 20th place is 18 points. The French league is very top heavy.

Last season, PSG won the League by 31 points. Thankfully there is an actual title race this season, but for the rest of the league, they’re on the outside looking in. The gap between a Champions League spot and a Europa League spot is 13 points. There might be a thrilling race for relegation with Montpellier in 11th but only 4 points clear of safety, but that’s not the kind of competition you want to advertise. This is a league for the have and have-nots and despite there being more haves this season, there remain many more have-nots this season.

Italy has been heavily dominated by one team since 2011. Juventus have won the Scudetto the last five seasons. With a seven-point lead over Roma, they look set to make it six. Juventus’ streak is the longest among the big five in Europe.

Italy’s top three teams look relatively safe for now. Napoli is six points clear of Inter, holding onto that last Champions League spot. That could be the scene of the League’s most interesting race, especially if Roma, only two points up on Napoli start to falter. Most of Serie A, however, isn’t looking to change. Palermo is in 18th and eight points from safety. So in Italy, there doesn’t look to be much drama at the bottom of the table either. 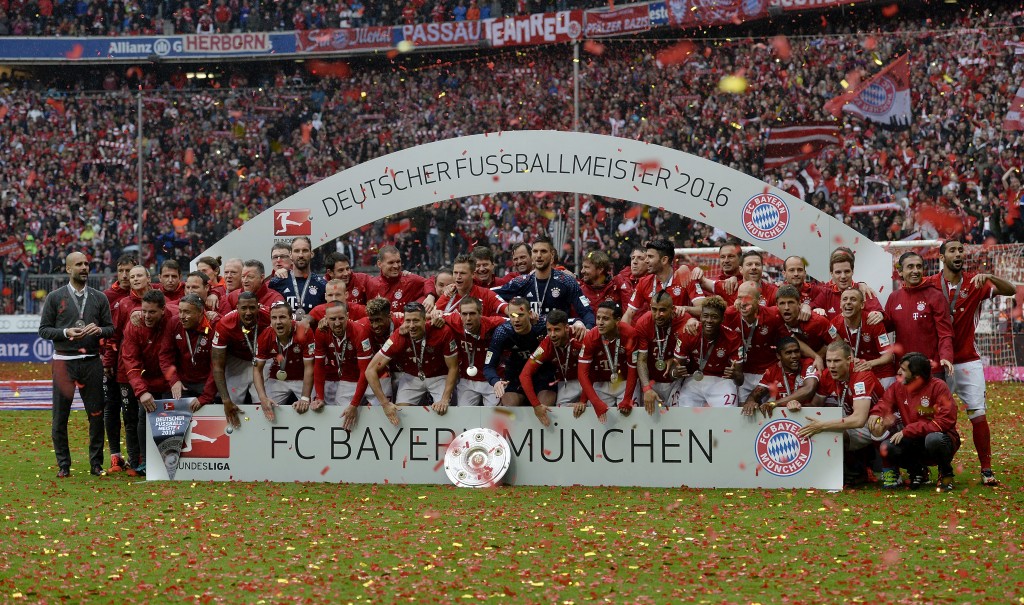 MUNICH, GERMANY – MAY 14: The players of FC Bayern Muenchen celebrate with the Meisterschale after the Bundesliga match between FC Bayern Muenchen and Hannover 96 at Allianz Arena on May 14, 2016 in Munich, Germany. (Photo by Daniel Kopatsch/Getty Images For MAN)

With Bayern Munich’s recent dominance, there has been a belief that the Bundesliga is a boring league in which Bayern rule with an iron fist. While The Reds do have a stranglehold on the top of the table, the league is surprisingly competitive. The race for the Champions League is shaping up to be pretty thrilling.

Positions two through seven are separated by ten points. It’s even closer if you look at three through six. Those four teams are separated by two points. At the bottom of the table, Darmstadt is almost certain to go down, but a three-team race between Hamburg, Bremen, and Wolfsburg could keep the relegation battle entertaining.

RB Leipzig gave Bayern a real run for their money in the first half of the season, but the record champions have since started pulling away, opening up a seven-point lead. Bayern might win their fifth consecutive Bundesliga, but things are trending upwards for their competition in the coming seasons.

With Leicester City winning last year’s Premier League, it showed how competitive the English game can be. This year, things have slipped a little as the gap between Chelsea and the rest of the league hurt the competitions parity. However, the race for the top four is set to be one of the most exciting in some time. Five teams are battling it out for the three spots under Chelsea, and given the inconsistent form from all involved, it should make for a great finish.

Manchester United, a team that looked lost earlier this season are in sixth but is now only two points behind Arsenal in fourth. Liverpool, who have bounced around from second to fifth are only one point out of a Champions League place.

At the other end of the table, the race for safety might be just as interesting as that for the top four. Swansea City has recently dragged themselves to their feet thanks to new boss Paul Clement, while champions Leicester and Crystal Palace have been imploding. The bottom six are all within five points of each other.

With many of England’s biggest clubs struggling both domestically and in Europe, it’s created a great amount of parity in the league. With any team seemingly capable of beating anyone on any given day, it’s done wonders for excitement.

It was hard not to give England this top spot, but given the quality of play in Spain, and how well it translates into Europe, La Liga is about as competitive as it gets. The race for the title is still one. Barcelona is only one point behind Real Madrid, and Sevilla is three back. Even though Madrid has played two fewer games than their rivals, those aren’t guaranteed wins. If Los Blancos can’t win their games in hand, La Liga could easily turn into a three-horse race.

Just behind the top three is a seven-point spread between fourth and eighth. While the race for a Champions League place might not be as close as it is in England, the teams involved are still some of Europe’s best.

What it all comes down to is Spain is the quality of the competition. There is a reason that Spanish clubs hold a three-year monopoly on the Champions and Europa Leagues. Week in week out La Liga produces some of the best teams on the continent. It makes for a pretty thrilling league, as well.