Hearts of Oak is the newest NYCFC supporters group and they have gotten some attention online. One thing is this membership application which lists seven criteria one must follow in order to be a member. 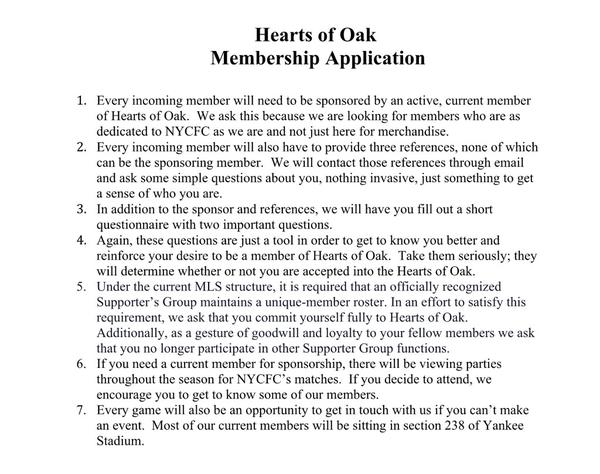 Sponsors? References? Having to give up your loyalty to other supporters groups? Is this a supporters group or a country club? Hell, I had an easier time getting this job than if I was to try to get into Hearts of Oak. I always appreciate anyone who does what they can to grow the game in the United States, but this is the work of some people who either have way too much time on their hands or want to create “The Stonecutters” of MLS supporters groups.

Hearts of Oak’s philosophy has received some banter from other fans as well as the Kansas City Cauldron, supporters group for Sporting Kansas City.

TO: Hearts of Oak FROM: literally everyone #NYCFC pic.twitter.com/bgHu16X8aQ

Re: the Hearts of Oak thing, it's a cool name and I do like that they want to build a positive environment, but … references?

@KCCauldron I applied, but the Crew are my safety school. My dad plays golf with a guy on the admissions board. #fingerscrossed

Hearts of Oak, the only supporters group that requires a perfect credit score to join.

@KCCauldron I have the same rules for the Paulo Nagamura Appreciation Society. Except the Yankee Stadium part, verbatim.

I cannot stop laughing at the Hearts of Oak requirements. I wonder if they will accept anyone without a Bachelors in Supportering.

Who referred and sponsored the founding members of Hearts of Oak? #NYCFC

@KCCauldron Meanwhile, in the @MonsterSquadKC, our only requirement is to "not be that guy and puke all over our shoes during the game."

Here’s some advice, be more inclusive than exclusive. Soccer is something that should be fun and this just adds to all the other things that weigh our lives down. Also, don’t alienate fans of the same team you root for by forcing them to choose between supporters groups. We’re all fans, that should be the only requirement. Either way, welcome aboard Hearts of Oak. As long as you love the game too, the more the merrier. Good luck everyone over there.