New MLS team, Orlando City SC, has some strange people working their twitter account. First, they sometimes tweet “BuiltNotBought” in regards to them getting into MLS through playing in USL Pro and having a solid fan base instead of their expansion counterpart, NYCFC, who writes a check and the team appears. While that is true, they have also opened up the checkbook since getting into MLS. After signing Kaka, Orlando City now has the fifth highest payroll out of 20 MLS teams (according to MLS Players Union figures from September 2014), even though they only have five players and they haven’t played a game yet.

On Thanksgiving, Orlando City wished everyone a Happy Thanksgiving by taking another shot at NYCFC.

Happy Thanksgiving from our family to yours! #LionNation #GoCity pic.twitter.com/AOUGiscSYG

It’s clearly a joke and it shouldn’t be taken seriously but I don’t get why Orlando City is trying so hard to form a rivalry with NYCFC. It’s especially bad when NYCFC could care less about the entire thing.

This leads us to Black Friday and Orlando City tried to add a little humor to their merchandise advertising. And as we have seen many times before with other companies, that may not be the best strategy. 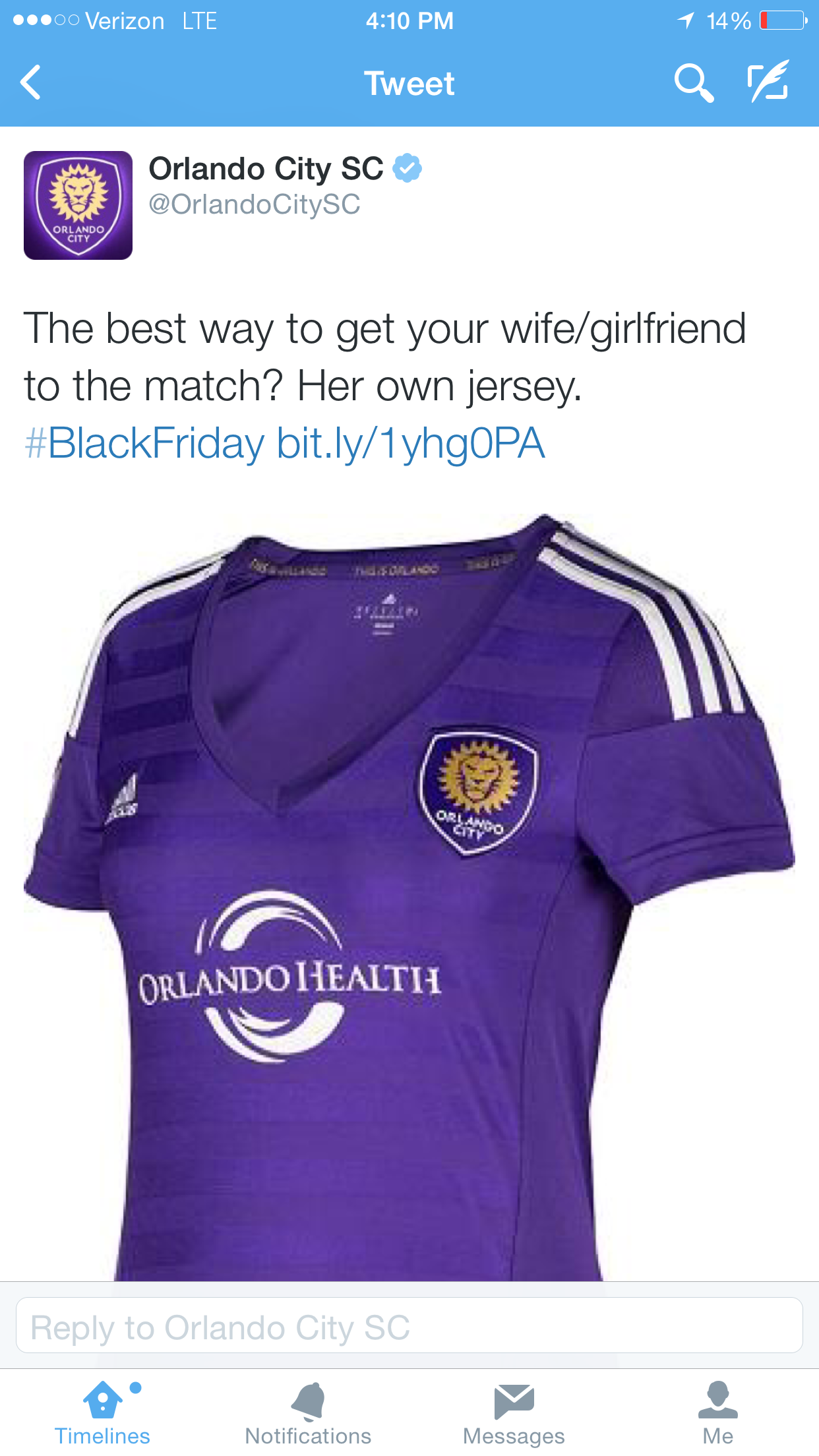 Social media 101 teaches us to not do that! Probably not wise to assume that women are only going to come to the game because they’re getting a jersey from their significant other. Within minutes, the soccer end of Twitter exploded over the tweet.

@OrlandoCitySC this whole thread…140 characters is not enough

Someone in the Orlando front office may want to get that tweet deleted.

@OrlandoCitySC "Hey, exclusively male fanbase obviously! Girls hate sports, RIGHT??? But they LOVE CLOTHES!!! YOU KNOW WHAT TO DO."

.@OrlandoCitySC SO glad I left the kitchen long enough to catch this on Twitter. I hope you plan to have Ladies Nights at matches, too!

@OrlandoCitySC a new way to find a lifemate!So glad my boyfriend got me my very own jersey because I never would have like soccer on my own!

Hey, @OrlandoCitySC, talk to your SG. They are making your mistake worse. What does "unintentionally offended" mean? pic.twitter.com/O9QQl4Z9us

The only soccer related problem I have with my girlfriend is her father's a #RBNY fan. #choosewisely

Welp, good thing MLS is back in the south.

You give Florida an expansion team, you're going to get some Florida in your league. pic.twitter.com/Z4ugT1tn6H

Orlando has since deleted the offending tweet and posted the following.

We apologize for our earlier tweet. In an attempt at humor, we crossed a line and we are sorry. Meant no offense to any of our amazing fans.

Being someone who was born in Florida, a couple of those tweets unfortunately hit home. Though from news stories I have read coming from Florida in the past, it’s not wrong. When it comes to an issue like this, it doesn’t matter what side of the fence you are on, this is something we can all learn from. It’s a cautionary tale for anyone who does any sort of business in the public eye. Take a few seconds and think about what is being made public because it may not be taken in the way you think.