The United States Women’s National Team played their second to last game in their World Cup send-off series as they took on the Mexico ladies team. Coming off a 3-0 win against the Irish Women’s Team, the United States tried to keep their good form going against their rivals from south of the border.

The United States had plenty of chances to score, and I do mean plenty. If not for Mexican goalkeeper Cecy Santiago, and some near miraculous saves from her, the US would have been up by at least three goals early on. However, Santiago proved to be beatable as in the 28th minute Sydney Leroux took a shot from a crazy angle after leaving the Mexican backline and keeper behind her and the ball just found its way into the net for the 1-0 US lead.

But, a miscue from U.S. goalkeeper Hope Solo gave Ariana Calderon the opportunity to head in the equalizing goal for the Mexican side. This was Mexico’s first goal against the United States ladies team since 2010. The half would end 1-1 and the U.S. had to make adjustments as they were producing chances but not capitalizing on them. 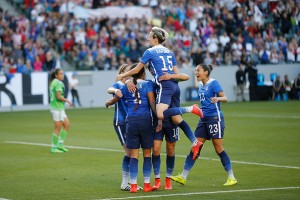 LOS ANGELES, CA – MAY 17: Forward Sydney Leroux #2 of USA celebrates with Midfielder Megan Rapinoe #15, Forward Christen Press #23 of USA and teammates after she scores the first goal of the first half during their international friendly match against Mexico at StubHub Center on May 17, 2015 in Los Angeles, California. (Photo by Joe Scarnici/Getty Images)

After some substations at the half, which saw Abby Wambach, Lori Chalupny, and Christie Rampone come in, the United States took control of the half and they got off to a fast start, as it took them a minute to score what would be the game winner. Sub Lori Chalupny scored after Wambach took a shot and it rebounded in the area, and Chalupny was the one who ended up netting the goal.

The United States did not stop there as in the 58th minute a handball in the area by Arianna Romero led to a penalty in favor of the U.S. which Abby Wambach blasted past Santiago to make it 3-1 for the USWNT.

Three minutes passed before the USWNT found the net again, this time Sydney Leroux netting her second of the game (making a great case for herself to be named a starter come World Cup time), as she dribbled by the Mexican keeper and defense and took a shot on an empty net. The game was basically over at this point with the score being a lopsided 4-1.

This was not enough for the U.S. ladies as in the 72nd minute Abby Wambach scored, to secure her second of the half, working her way past three Mexican defenders to head in a cross by Tobin Heath. Now the U.S. women were working with a scoreline they were more accustomed to, as the score with 18 minutes left was 5-1.

Megan Rapinoe would have scored a screamer of a goal that would have put up the USWNT up by five, but the referee blew the play dead as Rapinoe brought the ball down with her arm. Either way, the US ladies beat down the Mexican squad by a score of 5-1. After a sluggish start from the U.S. squad they wound up finding their chemistry and worked like a well oiled machine.

Now they have just one more warm-up game against the South Korean ladies squad before they head off to Winnipeg, Manitoba, Canada to play their first group stage game against Australia in the Women’s World Cup on Monday, June 8th.