Chattanooga is mourning. Yet again, our society is subject to another act mass shooting. This violence takes a toll on us all, especially those in the immediately affected communities. After the senseless murder of five human beings this past Thursday, Chattanooga grieved. Governor Bill Haslem spoke, which helped some. Flags ordered to half mast, which helped a little more. But the city needed to cheer, smile, and come together as a society. 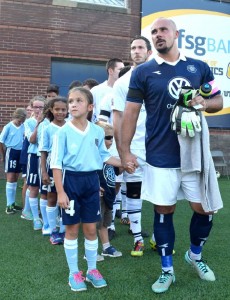 That chance came Saturday night, when Chattanooga FC played a soccer game amid this grieving time. Still reeling from tragedy, Chattanooga’s residents turned out for a season high attendance of 6,143 to witness Chattanooga play Miami Fusion FC in a National Premier Soccer League South Region semifinal. The players, without their top defender or top goal scorer, entered the pitch with a city at their back and a black band around their biceps.

Chattanooga FC, founded in 2009, is an amateur club on the fourth tier of the US soccer pyramid. As such, Chattanooga’s players receive no pay. They play soccer for the love of the game, and for the hope of getting a paycheck for playing the game they love some day. And, while Chattanoogans rallied around this club, Chattanooga FC does not field any native Chattanoogans.

But their lack of Chattanoogans does not mean the team was disconnected from the horrible events that befell their city. The club’s players come from the world over and they all understood, such as defender Nick Edginton, a New Zealander, who was quoted by the Tennessean after the game: “It’s a weird thing to just be playing a simple soccer game at a time like this, but maybe it’s something that we all need to do.”

Chattanooga’s playoff game transcended its on-field importance in the NPSL in that this simple, amateur soccer game offered the city of Chattanooga it’s first “fun” public gathering since the terrible events this past Thursday. Sport offers escape, it offers distraction, allows for happiness, and–in the case of Chattanooga–sport offers a place where people can come together, talk to one another, and work towards mental and emotional peace. Plus charity, as shirts saying “#NoogaStrong” were sold before the game to benefit the victims and families affected by the events. 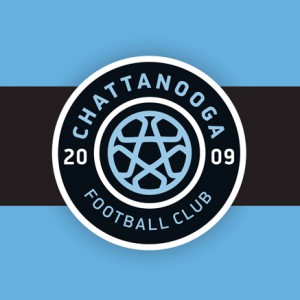 Sport clubs contribute to individual and social identity, especially for urban areas. But Chattanooga, surrounded by larger cities Nashville, Knoxville, and Atlanta, does not have much of a professional sporting culture. Until the founding of Chattanooga FC, the only game in town was the Chattanooga Lookouts–a Class-AA baseball club. As evidenced by the turnout and the media response, “Noogans” were in need of an outlet, in need of a reason to be proud of their city and their people.

Chattanooga FC hits the road for their next game in the Regional Finals against higher-seeded Myrtle Beach Mutiny. Even though they won’t been in “Nooga” proper, they’ll do the city proud no matter the outcome.

As Brazilian striker Jose Ferraz told the Times Free Press, “Even though some of our players aren’t from here, we’re aware of what happened…we’re proud to represent them and send a message to their families. We’re proud of what we’ve done with the community here, and it was a good way to give back to them with a win, to show that we’re Nooga Strong.”

If you would like to donate to the victims and families affected by the shootings that occurred in Chattanooga on Thursday, July 16, you can buy the #NoogaStrong t-shirt at the Chattanooga FC website.