With Jurgen Klinsmann being fired yesterday as US national team manager, the first legs of the MLS conference finals are not necessarily the biggest story in American soccer at the moment. But we’ll watch them anyway. To get you prepared, I give you a tactical preview of both games.

Overview: The Impact feel like this year’s Columbus Crew or Portland Timbers: a lower-seed that managed to surprise the league with a couple of upset wins at the right time. Toronto FC have always been one of the league’s most-talented teams, but their core flaws have never really gone away. Played at a sold out Olympic Stadium in Montreal, the atmosphere for this rivalry game will be off the hook.

TFC cruised through the first two rounds of the playoffs with relative ease, beating Philadelphia 3-1 in the knockout round and destroying NYCFC 7-0 on aggregate in the conference semifinal. Of the 10 goals they scored between those three games, Jozy Altidore was involved in five of them and Sebastian Giovinco was involved in six of them. They combined to score seven of those goals.

It’s safe to say that the two strikers make up most of Toronto’s attack. Montreal’s center back tandem of Victor Cabrera and Laurent Ciman will certainly have their hands.

One of the reasons they’ve been so successful this postseason is Greg Vanney’s attacking gameplan. TFC have come out in all three of those games and attempted to stuff the ball down the opposing center backs’ throat, with wing backs Steven Beitashour and Justin Morrow making diagonal runs and Altidore using his physical play with his back to goal to drag out a defender.

Then, they pounce on mistakes and patiently wait until they can break through on goal.

They come at you from all angles. Altidore (No. 2 on the board) will drop back and take a center back with him, Giovinco will run into the channel vacated by that defender, and if that’s not enough, Beitashour, Morrow, or a center midfielder like Jonathan Osorio will fill whatever space is left. It’s a suffocating system, and it’s how Toronto score their goals.

The Impact will have a counter to that, though, unlike Philadelphia and NYCFC.

Montreal’s key: Condense the midfield, break through the flanks

The main reason that New York City were so unsuccessful against Toronto FC was their possession-based playing style. TFC wanted to press high and hard in order to get numbers centrally, negating Patrick Viera’s methodical build-up and playing-from-the-back approach. The Light Blues couldn’t adjust to a more defensive system, and so TFC were able to decimate struggling center backs Frederic Brilliant and Maxime Chanot.

Mauro Biello has transformed the Impact into a sit-deep-and-counter team, which directly contrasts with NYCFC’s unsuccessful tactics and provides what looks like a much more effective answer to Toronto’s attack-minded methods.

With Ignacio Piatti running from the flank and three older, stagnant center midfielders, Montreal have found success when bunkering and focusing on the counter-attack. They take up a narrow shape and force the opponent to play down the wings — which is what ultimately killed the Red Bulls.

Their counter has worked against Toronto FC in the past. Piatti drew a penalty back on October 16 in a great example of how the Impact are able to play in transition.

In addition to how it works defensively for Montreal, it will also provide attacking benefits. Toronto love to blast their wing backs forward, and if the Impact are able to get players like Piatti forward quickly on the flanks, they can exploit the space left by Beitashour and Morrow. In turn, they force the back-three of Eriq Zavaleta, Drew Moor, and Nick Hagglund to spread out and defend 1v1.

The Impact bring an element that TFC have yet to see in this postseason. We’ll see if they’re able to defend well enough against Altidore and Giovinco to advance to the MLS Cup final.

As you probably know from watching any amount of Seattle Sounders soccer over the last few months, Nicolas Lodeiro does everything for their attack. He is their main creator and playmaker, he distributes all over the field, and he circulates possession across the middle and attacking third along with Alonso.

Starting from the wing — Erik Friberg is in the center for extra defensive protection — Lodeiro roams all over the field in search of the ball. The Sounders base their attack around Alonso’s distribution from deep and Lodeiro’s possession in advanced positions. Take a look at their passing chart from the second leg of the conference semifinal: 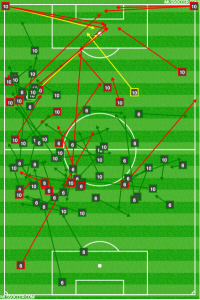 Alonso (6) and Lodeiro set records in the regular season for touches on the ball and passes completed, and those trends have continued into the playoffs. They are two of the most efficient ball-movers in this league today, which is great for Morris’s propensity for running the channels.

The Rookie of the Year takes advantage of the space left by midfielders and defenders forced to press the ever-present Lodeiro, and when the Argentine is the one playing you through, you’ll get chances on goal. Morris got behind Dallas’s backline multiple times — playing from the wing with Valdez securing a starting spot up front — and either got in on goal or was able to send in a ball from the touchline.

FCD tried to bunker in the first leg, and got broken apart by the incisiveness of Lodeiro and the pace of Morris. Similarly, Colorado will slow the game down by closing off passing lanes and the channels, leaving little room for players like LA’s Gio dos Santos and Lodeiro. Seattle beat Dallas, but it remains to be seen whether they can do the same with the Rapids.

The Rapids made a living in the regular season and the postseason by attempting to shut off opponents’ attacking outlets and by carving out as many 0-0 and 1-0 games as possible. This is why they were a couple points away from the Supporters’ Shield despite scoring only 39 goals.

Defender of the Year candidate and 6’7” aerial monster Axel Sjoberg pairs with Jared Watts in central defense to fend off crosses and route 1 long balls — both of them have had a very impressive postseason thus far.

Sam Cronin was one of the best No. 6s in MLS this year (and their team MVP, according to Sam Stejskal) and with two other box-to-box midfielders — usually Michael Azira and Dillon Powers, although Jermaine Jones is back and as tired as ever thanks to Jurgen Klinsmann — as backup for Cronin, Sjoberg, and Watts, teams have trouble breaking through the Rapids’ tight lines.

It takes clubs a good amount of time to scrape out a goal. This is not an easy defensive system to get around:

Games involving Colorado are not always entertaining. That second leg tie with LA was one of the more tedious 120 minute matches I’ve seen.

But that’s just the way Pablo Mastroeni likes it. It’s worked, after all. Now we’ll see if Lodeiro and Morris can break it.