We’re onto the second legs of the MLS Cup Playoff conference semifinals. The teams, the lineups, and the general look of things will be the same as last week. Now, it comes down to which manager can make the correct adjustments to either hold the lead they’ve attained or overcome the deficit they dug themselves into.

It will be interesting to examine the tactical battles each will entail. For now, I give you a quick preview of what you should be expecting from the games:

Overview: The Galaxy won the first leg at home by a score of 1-0, with Giovani dos Santos’ goal the difference. A 1-0 Colorado win would send this series to extra-time. 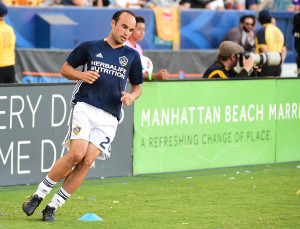 CARSON, CA – SEPTEMBER 11: Landon Donovan #26 of the Los Angeles Galaxy warms up before entering the game in the second half against the Orlando City FC as he returns from retirement at StubHub Center on September 11, 2016 in Carson, California. (Photo by Harry How/Getty Images)

LA’s plan: One could reasonably assume that the Galaxy will play a slightly more conservative game in the second leg. They have a 1-0 lead and they are playing on the road at a place that is a notoriously tough place to play due to the high Colorado altitude.

Bruce Arena will likely have his team sit back a little farther and possibly have Sebastian Lletget — who was something of a dual No. 10 last week — play more of a box-to-box role to cover for midfield partner Baggio Husidic. This mindset is exactly what Colorado would like to avoid playing against, because they’re supposed to be the conservative defensive team.

Force the Rapids to attack early and spread the field so dos Santos, Emmanuel Boateng, and Landon Donovan can do what they do in transition. You’re not going to beat Axel Sjoberg and Jared Watts with crosses very many times, so might as well make them run.

Colorado’s plan: Pablo Mastroeni will have to get this team to attack a little more than they would like in this game. This is not their strong suit.

That means Shkelzen Gashi will have to create some chances (likely something other than a long-range golazo); Kevin Doyle and/or Dominique Badji will have to make runs, finish well, and basically do what they are supposed to do as strikers; and their entire defensive shape (which often includes deeper midfielders Sam Cronin and Michael Azira) will probably need to take up a higher line.

This all will leave them open to counters and odd-man rushes from the Galaxy, but that’s what they bargained for when they settled for a 1-0 result last week. The key for Colorado in all of this is one Jermaine Jones.

Jones, the longtime MLS and US national team midfield destroyer, is back from injury and should be available to start. As he did for the second half in the first leg and back before he got injured, Jones will play in the No. 10 slot. This basically means that he will still be the athletic ball-winner and distributor he usually is, just higher up the field.

He provides a true goal-scoring threat that the Rapids just don’t have anywhere else. Jones finished fourth on the team with three goals — incredible considering that he played just 770 minutes. No other attacker for the Rapids can say that they are a trusted scorer, and while that’s scary if you live in Commerce City, it should be worrying to LA fans considering that he will back and ready after shaking the rust off last Sunday.

Defensively, Jones will be tasked with covering a ton of ground and doing whatever he possibly can to stop Galaxy counters before they happen. Basically, he needs to be a presence in midfield, and he needs to disrupt whatever rhythm LA can get going.

The last time Jones started a playoff game, he was red carded and suspended for six games the following season for making contact with referee Mark Geiger, who will be in the center on Sunday afternoon. Whatever happens, there should be some fireworks.

Overview: Montreal lead this tie by a score of 1-0, with Matteo Mancosu’s volley in leg one the difference. Just like the Colorado-LA series, a 1-0 home team win will send it to extra time.

Montreal’s plan: The Impact, pretty clearly, are at their best when they are on the run. The front three of Matteo Mancosu, Dominic Oduro, and Ignacio Piatti provide a deadly combination of speed, skill, and tactical savvy when they are able to get in transition, and the Red Bulls backline has struggled to handle it.

As they did in leg one, Montreal will take advantage of the abilities of their attacking trio by playing defensively, condensing the midfield, and drawing the Red Bulls forward. NYRB will be forced to get on the attack earlier and faster in this game, playing into the hands of Piatti, Mancosu, and Oduro even more.

By positioning the central midfield tighter and deeper, Montreal are able to cut the head off of New York’s attack. Sacha Kljestan — a Lletget-esque two-way No. 10 — was marked into submission in leg one, and without his distribution, Bradley Wright-Phillips is left void of service. Thus, Jesse Marsch is left searching for ideas.

It is worth noting that versatile attacker Gonzalo Veron — brought in by Marsch in the 73rd-minute last week — made a significant difference. If the Red Bulls decide to get him on earlier, the Impact will have to find a way to adjust.

New York’s plan: They’ll press, and press, and press some more. They’ll fly everyone forward, put players into the box, and hope for the best. It’s frantic-yet-well-calculated strategy, and it’s been pretty effective chasing the game over the past couple seasons.

The obvious answer to the Impact’s midfield-suffocating and game-narrowing approach would be to get the ball to the wings and attack from those areas rather through the crowded central zones. But this is not what Mike Grella and Alex Muyl do. Grella plays inverted most of the time and the only instances where he will drift out wide is when he wants to go Grelladinho on the opposing fullback. Muyl, meanwhile, will simply run all day and numbers in the box.

These guys are not Joao Plata and Burrito Martinez, and the fullbacks (Kemar Lawrence and Chris Duvall) are not Waylon Francis and Harrison Afful. In other words, these are players who do not shape attacks.

And so here the Red Bulls are. Montreal will have to be prepared for some ruthless, chaotic, tactically-sound pressing, as well as direct attacks and, of course, the best set pieces in the league.

Overview: TFC dominated the first leg at home, winning 2-0. NYCFC have a lot to do to turn this around.

Toronto FC’s plan: Toronto will play their 3-5-2, get the wing-backs hitting the corners, and they will stuff the central channels. They will build their attack around the partnership between Sebastian Giovinco and Jozy Altidore up top; they will use the hold-up play of Altidore and the crafty movement (on and off the ball) from Giovinco to get the NYCFC backline scrambling. 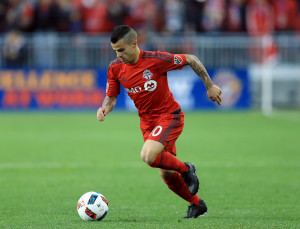 TORONTO, ON – MAY 07: Sebastian Giovinco #10 of Toronto FC dribbles the ball during the first half of an MLS soccer game against FC Dallas at BMO Field on May 7, 2016 in Toronto, Ontario, Canada. (Photo by Vaughn Ridley/Getty Images)

With Altidore and Giovinco working magic in the half-spaces, midfielders like Jonathan Osorio and Marky Delgado can step forward and find the space vacated by defenders chasing the two strikers. This further complicates things for a backline that isn’t all that great in the first place.

Basically, Toronto will focus on crowding the defensive gaps — a tactic based around Altidore and Giovinco — and then hitting NYCFC with second and third runners from midfield. In addition, wing-backs Steven Beitashour and Justin Morrow will bomb up and down the wings all day, providing another attacking option for a team that is already full of them.

They’ll be a bit more conservative with their lead, but this is still pretty much how their attack will work. NYCFC are very different.

NYCFC’s plan: Patrick Vieira has his team playing a possession-based game centered around their ability to hold the ball in the back before using the midfield to get the ball to the front three. They keep the ball as much as possible and are one of the few teams in MLS that station their tactics around possession.

NYC struggled to do this last week for two reasons: 1) TFC pressed higher than they anticipated and the backline was unable to pass out of it; 2) their main midfield distributor, Andrea Pirlo, was injured. They’ll likely have another hard time on Sunday because of the small Yankee Stadium field and the fact that Pirlo may not play (he is listed as questionable).

For the reasons listed above and because they are chasing a lead, they will likely play a bit more direct to David Villa (who shouldn’t even be playing in this game). The gradual buildup that comes with their possession-based style may not be enough to come back from this deficit, especially with their error-prone defenders and a high-pressing Toronto side.

Overview: Seattle dominated leg one, winning 3-0 at home and going a long way towards clinching a spot in the next round.

If manager Brian Schmetzer (the interim tag was finally dropped this week) keeps the same lineup, Nicolas Lodeiro will play on the wing to get him into better spots in the final third while Erik Friberg plays in the middle. We could also see a rejuvenated Nelson Valdez start again up top with a field-stretching Jordan Morris on the wing.

Ozzie Alonso and Cristian Roldan will partner in deeper midfield ahead of a backline that may or may not include Roman Torres, who was injured last week.

Should Schmetzer decide to make any adjustments, it would likely come in the form of a more defensive player like Brad Evans entering a full back or even on the wing. I don’t think we’ll see any big new tactical wrinkles from the Sounders this week.

FC Dallas’s plan: They’re going to have to throw the kitchen sink at the Sounders, without giving up an away goal that would permanently sink them. It’s a tough task.

That means Oscar Pareja will have to make some significant lineup changes. Last week, they played a conservative 5-3-2 with three defensive midfielders: Kellyn Acosta, Carlos Gruezo, and Victor Ulloa. They counted on being able to keep the Sounders below two goals and possibly nicking an away goal courtesy of one of the strikers, Maxi Urruti and Michael Barrios. It didn’t work.

Now, they’ll have to abandon the 5-3-2 and come out with a 4-2-3-1. Mauro Rosales seems poised to start as a direct replacement for Mauro Diaz, and we will probably see a more attacking player (like Tesho Akindele) starting on the wing ahead of a Ryan Hollingshead-type player.

It’s going to have be a very attacking look. They will have to get out on the front-foot early and draw set pieces, get crosses in, and try to get Barrios and Urruti into open space. If they’re unable to do that, they will lose. If they give up a goal, they’ll lose.

This is not a great situation for the Supporters’ Shield winners.