Toronto FC’s journey here was not as Hollywood-like as Seattle’s, but it was plenty impressive nonetheless, and the way that they built this roster can be used as a blueprint for other MLS clubs. 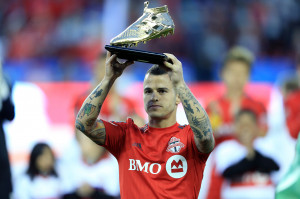 TORONTO, ON – MAY 07: Sebastian Giovinco #10 of Toronto FC is presented with the MLS Audi Golden Boot Award as leading scorer for the 2015 season prior to an MLS soccer game against FC Dallas at BMO Field on May 7, 2016 in Toronto, Ontario, Canada. (Photo by Vaughn Ridley/Getty Images)

From the beginning, TFC were considered real Supporters’ Shield and MLS Cup contenders. A lot of their Shield chances depended on how well they would be able to stay afloat at the beginning of the regular season, as they were forced to play their first eight games on the road as BMO Field underwent more renovations. TFC picked up 11 points from those eight matches, putting them in pole position to rocket up the standings with all the home games they had remaining.

Greg Vanney had his club in the Eastern Conference playoff picture from the beginning, and by August, TFC were contending for a Supporters’ Shield with FC Dallas and the Colorado Rapids. Sebastian Giovinco had recovered from an early season slump and was firing on all cylinders, as was a rejuvenated Jozy Altidore. Plus, they already had a trophy under their belt, as Will Johnson’s late leg-sacrificing winner had won them the Canadian Championship in late June.

Unfortunately for their Shield hopes, September and October were not kind to TFC, as they finished the regular season in third. They were forced to play a knockout round match against Philadelphia as a result, a game which they won fairly easily.

Tactical adjustments from Vanney — who has quietly developed into one of the best and most promising head coaches in MLS — were huge throughout 2016 for the Reds. He put together 3-5-2 and diamond 4-4-2 formations that he alternated for much of the second half of the season, allowing Giovinco and Altidore to partner up front with support from overlapping wing backs Justin Morrow and Steven Beitashour.

His ability to adjust his tactics and personnel in the middle of games have saved a number of points for Toronto this season — the most recent example has been his willingness to play Tosaint Ricketts up front with Giovinco slightly deeper while chasing games. Vanney has switched full time to the 3-5-2, meanwhile, and he has found a consistent starting XI that fits well with the three-in-the-back formation.

These examples of tactical genius are only part of what makes TFC a wonderful example for other MLS teams to follow, as Matt Doyle wrote over at MLSsoccer.com. Their ability to develop, sign, and trust young US and Canadian players rivals that of any other club in the league, and this should be the first of many years that it truly pays off.

The number of young domestic players that Toronto have on their roster is large. Guys like Nick Hagglund, Jordan Hamilton, Jay Chapman, Tsubasa Endoh, Alex Bono, and Jonathan Osorio are great examples of players coming from college soccer, Toronto youth teams, and Toronto FC II in the USL that have and will play big roles for the first team. Hagglund and Osorio (both 24) are both regular players.

Many other teams have good young players coming through the ranks, but they fail to give them the playing time that they need to develop into quality starters — looking at you, Bruce Arena. TFC have made a habit of giving young players good minutes, and it’s obviously paid dividends.

Of course, the highly-paid Designated Player trio of Giovinco, Altidore, and Michael Bradley are the key players for this team, and none of them have made a single appearance for their USL reserve team. That’s fine; star players are great. They drive the team forward and they put fans in the seats.

And let’s remember that those three DPs are all under the age of 30. This is not Andrea Pirlo, David Villa, and Frank Lampard of NYCFC. Toronto — like Seattle — have signed players who will be regular contributors, and perhaps more importantly, long-term contributors. Being smart about signing DPs is just as important as developing domestic players.

Toronto mastered those both of those. Their third way of acquiring talent — picking up cheap veteran contributors and making the best of them — fit right in with their expensive DPs and homegrown players.

Beitashour, Drew Moor, Armando Cooper, Clint Irwin, Ricketts, and Will Johnson were all signed in this calendar year, and they all have made important contributions. Beitashour and Moor were key members of the backline, Cooper and Johnson will likely start in the final, Irwin’s been great in goal, and Ricketts is a better super-sub than Didier Drogba.

The TFC organization did a great job with those players, and they’ve done a great job with this organization. It’s true that we shouldn’t put too much stock into the successes of the teams that make MLS Cup — the clubs that made it last year both missed the playoffs this year — but Toronto truly look to have found a long-term answer.

Combining smart DP signings, good domestic players coming through the system and the trust of those players, and savvy veteran signings worked for Toronto, and I see no reason why other teams don’t invest more time and energy into those three things. That means less Pirlos and Schweinsteigers and more Lodeiros and Almirons and Osorios. Easier said than done, but this is not an unreasonable expectation.

We’ll see how well Toronto can keep their success next season — it will take some offseason moving and shaking, as a stagnant Columbus showed us last season — and whether the Sounders can do the same. In the meantime, let’s focus on this Saturday’s MLS Cup, which, like the entire season, promises to be entertaining.