The U.S. Open women’s draw is out. Here is the bracket for the year’s final major.

We all know who the main story is in Flushing Meadows, New York: Serena Jameka Williams, whose initials — “SJW” — could just as easily refer to the reality of life on the WTA Tour: Serena Just Wins.

It is in the nature of a great player — the world No. 1, a 21-time major winner, a player who has lost all of two matches this year — to rise above any and all obstacles she faces. That said, if you were to create a relatively tough draw for Serena in New York, this comes pretty darn close to the perfect(ly thorny) path.

Should Serena be favored to win this tournament? Without any question. It’s not a discussion. However, can she be picked off? By this draw? Absolutely.

Of course, Serena defuses dangerous opponents with her defense and silences them with her serve. It’s a cliche, but cliches are cliches because they’re true: If Serena’s elbow doesn’t act up and she performs up to her capabilities, she won’t lose. The drama of this tournament will be found in and through Serena more than anyone else — how will Serena serve? How will she handle the pressure and the publicity? How will she react to the adjusted conditions inside Arthur Ashe Stadium, which is no longer a completely open bowl, but has THIS substructure on top: 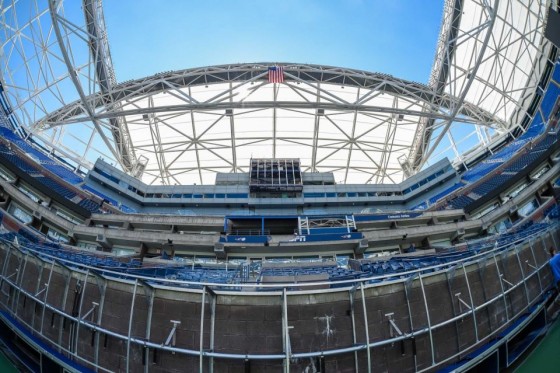 One must also note that this year’s U.S. Open schedule — being different from the past, when CBS televised the championship-stage matches — will be more compressed for the women. What had been a Wednesday-Friday-Sunday progression from the quarterfinals to the semifinals to the title match (with two of the four quarterfinal matches being played on Tuesday) is now Wednesday-Thursday-Saturday for half of the quarterfinalists, Tuesday-Thursday-Saturday for the other half of the quarterfinalists. The schedule — who plays on what day? — hasn’t been unveiled yet by the USTA, but if Serena starts the Open on Tuesday and not Monday, she would have to play a daytime quarterfinal on Wednesday and then a night semifinal on Thursday.

(Here’s betting that Serena will start the tournament on Monday, then — the USTA will want her to play Tuesday night in the quarterfinals.)

You never know in sports — after all, who thought Serena would struggle at each of the first three majors in 2014? Who then thought she’d produce such a dominant and towering 2015, as she approaches her 34th birthday in late September? She’s the favorite in the Big Apple, but there are banana peels in her draw.

The fun for Serena could start as early as round two, if Mirjana Lucic-Baroni escapes round one. Lucic-Baroni has beaten Simona Halep twice at the majors over the past 11 months. Athletes occasionally find “the zone,”  when every shot is going in and nothing goes wrong. Lucic-Baroni doesn’t access the zone very regularly, but when she does, it’s a higher level of play than what a lot of her peers on tour are capable of when they gain a pronounced rhythm on court. Should Serena win in straights? Sure. Could Lucic-Baroni make a match of it? Just as surely, yes.

Madison Keys — who would have nothing to lose — could face Serena in the fourth round. What if Keys just lets it go and clobbers the ball, keeping it inside the painted white lines?

In the quarterfinals, what if Venus Williams; Toronto champion Belinda Bencic (who beat Serena in the semifinals of that tournament); or Karolina Pliskova all strike the ball as crisply as possible? Those players are capable of knocking Serena out — not likely, but more capable than a lot of alternatives one could have mentioned in a potential draw path.

Yes, Maria Sharapova could await in the semifinals, weirdly giving Serena a more manageable opponent at a later point in the tournament. Yet, don’t forget how close the first meeting at a hardcourt major in 2015 proved to be. Serena’s win over Sharapova in the Australian Open final was a close, high-quality match… unlike the rendezvous at Wimbledon. If Ana Ivanovic plays Serena in the semis, the reality of a close Cincinnati quarterfinal clearly shows that the underdog would at least have the ability to push Serena into a third set.

Serena might make this tournament a cakewalk with her level of play, but the list of opponents in front of her does not constitute a cakewalk draw — anything but.

We now turn to “the rest of the draw,” which will unavoidably live in the shadows of Serena as long as the potential history-maker is still in the tournament, but which offers rich opportunities for points pickups and large paychecks. Someone could either make a career or build confidence for the WTA Finals and beyond (or both).

In Sharapova’s quarter, the fact that Sharapova and Ekaterina Makarova have been dogged by injuries in the month of August makes this one of multiple wide-open quarters in the U.S. Open. Roland Garros (2015) quarterfinalist Elina Svitolina could make another major quarterfinal this year. Ana Ivanovic has to think she has a legitimate chance at the semifinals in this draw. Jelena Jankovic certainly should expect the same. Other players who flourished at earlier points in 2015 — Carla Suarez-Navarro and Alison Van Uytvanck — have been placed in this draw.

The next quarter is even more wide-open. Caroline Wozniacki is (somehow) the No. 4 seed despite a very difficult and luckless year on tour. The No. 5 seed is Petra Kvitova, who was recently diagnosed as having mononucleosis.

It would be a surprise if either seed makes the quarters, giving the rest of this section the chance to surge up the WTA rankings list. Two first-round matches in this quarter — Julia Goerges versus Anna Schmiedlova and Andrea Petkovic versus Caroline Garcia — are far more significant given this particular draw. Maybe an old veteran — former U.S. Open semifinalist Flavia Pennetta — has one more deep run in her at this event. Who knows in the Wozniacki-Kvitova quarter?

The bottom quarter is anchored by No. 2 seed Simona Halep, but after her early exits at each of the last two majors, her ability to handle big-stage pressure is a valid concern — at least in the present moment. (A good showing in New York would offer more than a little reason to stop worrying about her competitive chops.)

The good news for Halep is that the likely opponents in her section (taking her through the fourth round) are mercurial. Alize Cornet is a box-of-chocolates tennis player: You never know what you’re going to get on a given day. Timea Bacsinszky was extremely consistent through Wimbledon, but has since cooled off, perhaps running into a wall in much the same way that Halep herself (and Genie Bouchard, to give an even better example) did once the tennis world moved from Europe back to North America in the middle and late portions of summer.

On paper, Lucie Safarova and Victoria Azarenka should meet in the fourth round in this quarter and give Halep all sorts of problems. However, Azarenka’s recent pullout from Cincinnati with an injury serves as cause for caution. Safarova made the French Open final and made Serena earn her third Roland Garros championship, but since then, she has not performed or accumulated results at nearly the same height. If Azarenka and Safarova don’t recapture some magic in New York, this quarter also becomes a bomb-shelter bracket: wide-open.

It’s Serena’s show — much as the men’s side gives every appearance of being a three- or four-man competition involving the ATP’s big guns — but both draws at the U.S. Open should give us a lot of second-tier dramas before the quarterfinals and semifinals. Which players will take advantage of draw-based opportunities to achieve various breakthroughs or consolidate gains, thereby enabling 2015 to be seen in a much more positive light?

Serena’s the centerpiece, but all the other acts near Broadway should give women’s tennis fans plenty of intrigue and entertainment.