Simona Halep and Agnieszka Radwanska were not happy with French Open officials on Tuesday.

In rain-soaked conditions, both players would have preferred to not play. On merit, their points were not unreasonable. Hitting a waterlogged ball on a highly saturated court doesn’t seem like an ideal way to contest a major championship. The ball should be appreciably dry. The court can play slow, creating a heavier ball, but the abundance of precipitation represented — one could certainly argue — a beyond-normal inconvenience for players.

Insisting on shepherding the tournament forward was the obvious motivation of organizers, who know that future forecasts this week are not encouraging. There was an imperative to finish matches on Tuesday. Yet, from a player-centric perspective, conditions altered the balance of power in matches.

One should be able to sympathize with Halep and Radwanska on a certain level.

The hard part? Neither player has won a major title, and moreover, neither player has been particularly consistent at making major finals and semifinals. Both players have reached only one major final. Radwanska has made five major semis, Halep three. Since Halep made the 2014 Wimbledon semifinals, the two players have owned 14 opportunities (seven apiece) to do something at majors. The tote board: three semifinals (2-1, Radwanska) and no finals.

When players establish a high standard and are short-circuited by conditions, it is a lot easier — contextually and emotionally — to empathize with them not just in the present moment, but from a more distant and panoramic vantage point. When players demonstrate an inability to overcome hot players (Sabine Lisicki and Garbine Muguruza for Radwanska in separate Wimbledon semifinals, Flavia Pennetta for Halep in last year’s U.S. Open semifinals) or tricky opponents (Mirjana Lucic-Baroni for Halep, Sara Errani for Radwanska in the 2012 French Open quarterfinals), it is hard to give them the benefit of the doubt when they don’t adjust to the rain of Paris.

Their complaints might be reasonable on a micro level, but their inability to preserve leads in suspended matches is impossible to defend on a macro level. 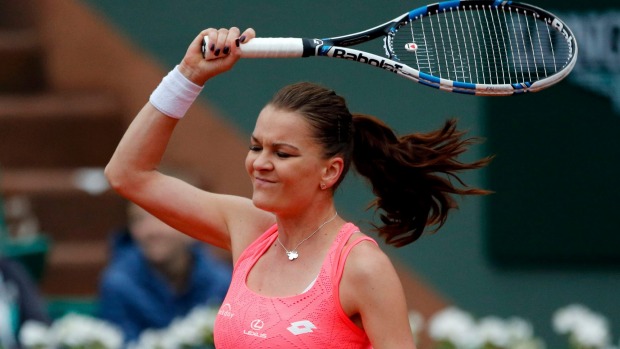 Such is the nature of the majors, where changing weather patterns and an unpredictable string of opponents force competitors to find different solutions for seven different challenges over the course of two weeks. In the cases of Halep and Radwanska and (for that matter) all other players whose matches were suspended on Sunday or Monday, it was a fact of life that the resumption of the match was going to feel different. It was likely that the resumed matches would involve a different kind of ball, and hence, a different level of hitting.

Halep and Radwanska weren’t wrong to complain. I would have done the same thing. Many others would have, too.

Yet, what is on the surface an entirely reasonable gripe must be placed in the larger context of repeated failures at major tournaments.

Were Simona Halep and Agnieszka Radwanska cheated out of a chance to do something at this French Open, with Serena Williams safely in the other half of the draw?

When players regularly fail to do what they can on the biggest stages in tennis, it’s hard to be overly sympathetic — not because specific arguments were wrong (they weren’t), but because major tournaments never turn out right for these two snake-bitten players.

Halep and Radwanska have to find a way to overcome adversity under the klieg-light glare of pressure… even (especially) when the light can’t break through the clouds.