The 2016 Miami Open might become something very different in the course of time… and that’s part of what made it such a fascinating tournament to observe.

We could look back on the past week and a half in Key Biscayne, Florida, and realize that the journey led to predictable endpoints in 2016: Novak Djokovic ruling everything in sight, and Victoria Azarenka finally winning more major titles, re-becoming the globally ascendant figure (and rival of Serena Williams) she was a few years ago.

Yet, what matters more about Miami in the here and now is that the same basic result and tournament dynamic mean different things for the ATP and WTA Tours.

What’s really neat — counterintuitively so — is that those different meanings reinforce the same notion: The next several months in Europe (mostly clay, followed by British lawns) will tell some great stories — certainly loaded with impact, possibly freighted with massive historical significance.

One can’t insist that others should feel a certain way, but I can only speak (and write) for myself in saying that tennis — on both tours — feels as vital as ever.

Yes, this is the case after a Miami Open in which a lot of familiar names — comfort food for fans and bloggers — either didn’t show up or didn’t stick around very long.

Serena Williams got bumped off by Svetlana Kuznetsova (even more surprisingly, after winning a first-set tiebreaker — who thought Sveta was coming back from THAT?!).

Juan Martin del Potro’s wrist continues to bark at him. (Ugh, ugh, ugh — all the tears and sad-faced emojis.)

Andy Murray lost to Grigor Dimitrov, capping a brutal month of March in the States. (Yes, we in the United States use the word “brutal” with a negative connotation, not a positive one.)

Stan Wawrinka was a non-factor in Miami, just as he was in Indian Wells.

Rafael Nadal made a deep run in Southern California, but not in South Florida. He lost momentum, although he gained rest time and can now focus his energies on a supremely dramatic (for him) clay-court season.

Oh, and there is that Sharapova person, too… where has she been recently?

All these big names, all these gaps in the Miami Open, all these uncertainties in both draws. For 11 days at the Crandon Park Tennis Center, fertile fields of opportunity emerged on cement. Players used to running into brick walls named Nadal or Murray or Serena or Sharapova suddenly encountered less imposing, less experienced opponents in the fourth round, quarterfinals, and semifinals of a comparatively significant tournament.

Bursting through these doors were Azarenka and Djokovic most of all (not that Djokovic needed any draw luck, of course), but several faces joined them in seizing the Miami moment.

While we salute the excellence of Azarenka and Djokovic — two players who stormed through Key Biscayne without losing a set — these other nine players represent why tennis is such a gift bag of curiosities and excited murmurs. 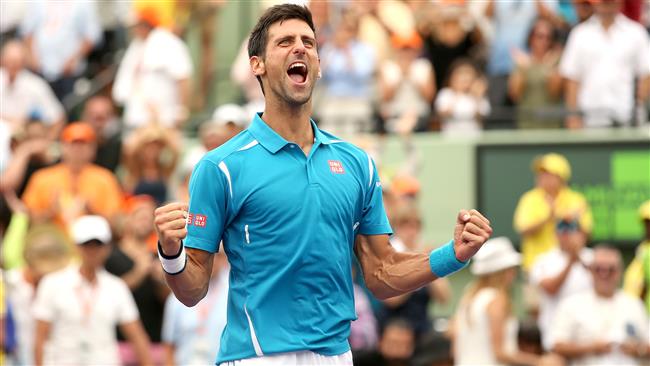 Two points are worth amplifying here in order to explain why:

1) Because of bracket chaos, many (though not all) of those nine aforementioned players advanced deeper into the Miami Open without facing the toughest possible opponents. This naturally leads to the “curb your enthusiasm” reminder that a result in a given tournament and a proven ability to beat higher-ranked opponents aren’t one and the same thing. Of course you’re going to wonder (as will I) if these deep runs in a tournament without Serena/Sharapova/Fed/Rafa/Muzz/Stan will be sustained. We’re going to carry questions about these nine players throughout the rest of the year.

However, while noting that good results in Miami don’t necessarily mean that the rest of the year is going to go well, we should take note of this point, too: Even though a player might not beat an elite opponent in a given tournament, the mere experience (reality?) of playing in a Masters 1000 semifinal or a Premier Mandatory quarterfinal can — by itself — light a spark inside the human person. Standing on that court in a high-stakes match — even though that moment might have been the product of a fluke occurrence in the draw — can tell the individual athlete, “Hey, you belong here. You can DO this!”

Taking from that list of nine players, none seems to fit that specific construct more than David Goffin. He made the Indian Wells semifinals, and he came to America’s other coast with a better, tougher mindset. He got one taste of a late-stage tournament match and liked it so much that his hunger was able to translate into another strong week. That doesn’t happen all the time, but it CAN happen, and that’s the kind of moment tennis can provide with so many of the headliners either injured, ill, or ineffective in Miami.

That’s fascinating to me. Will we have more of these transformations to write about in the weeks and months ahead?

2) We had a chance in Miami to see late-stage matchups between players who haven’t typically shown up in Masters 1000 semifinals or Premier Mandatory quarterfinals, which shines a spotlight on them and their ability to handle pressure. This advances the story of tennis — at the very least, this happens by simply showcasing players under stress. Much more can possibly emerge from the experience by giving players a chance to learn from failures in the future, which could benefit them and thereby strengthen the composition of the tennis tours.

Federer, Murray, Nadal and Wawrinka fans had to be bummed about seeing quarterfinals and semifinals without their favorites, but for bloggers and neutral parties following this tournament, wasn’t it fascinating to see Milos Raonic and Nick Kyrgios deal with quarterfinal-stage pressure, knowing Djokovic was safely on the other side of the bracket? The Nishikori-Monfils quarterfinal could become a very significant moment in the larger context of men’s tennis if Nishikori uses his runner-up showing as a springboard to a big spring and summer. The Kyrgios-Nishikori semifinal was a fascinating serve-versus-return battle. We might not have arrived at definitive, binding verdicts on both players, but we took notes on them and will file them away for next time.

That’s pretty darn fascinating to me, too.

Oh, and then we had two great champions dominating Miami… but with different implications for both tours.

Victoria Azarenka and Novak Djokovic both won in Key Biscayne without losing a set, and yet Azarenka’s ascendancy represents the arrival of a rival for the World No. 1, Serena. In men’s tennis, Djokovic’s romp means something entirely different: It puts him even more firmly at the top of his sport, with no clear No. 2 challenger (though Murray’s failures reinforce the idea that Federer is still the second-best men’s player out there… but that’s to be revisited at a later point).

Azarenka won the Indian Wells-Miami double (I call it the “Califlorida Double”), and it means the story of women’s tennis has found the plot resolution it was seeking for years… and frankly needs.

Djokovic won the Califlorida Double, and in his case, it means that men’s tennis is now in the position women’s tennis inhabited before Vika started piling up victories. Seeing the same event — a champion storm to victory and complete a bi-coastal hardcourt spring double in the States — coincide with role reversal on the WTA and ATP Tours shows how spacious and layered the sport of tennis is…

… without a lot of big names on the board.

I love this sport, and seeing the excellence of both Azarenka and Djokovic does absolutely nothing to suggest that tennis has suffered from two authoritative victory marches in Crandon Park.

If tennis was in a bad place, the clay season would be utterly bereft of drama. The next great act in the story of tennis — the journey through 2016 — would be something one should want to pass quickly by, without incident.

I don’t want anything to quickly pass by. These next few months — set up by Miami — are to be savored and scrutinized and sized up.

The promise of new riches and higher rankings lighting a fire in a player ranked outside the top 10?

The Old Guard putting its foot down and taking a stand?

Any of these stories will be compelling — I’m ready for each of them.

Let’s hear it for tennis, interesting regardless of the specific faces on the court.