Grant Hill and Jared Dudley of the Phoenix Suns teamed up to help create that PSA you see on why casual gay slurs need to be eliminated.  It’s a cause that is gaining steam, especially after the outcry over Kobe Bryant’s use of a gay slur on the sidelines.

And perhaps highlighting the need for the PSA was the response Grant Hill got on Twitter. 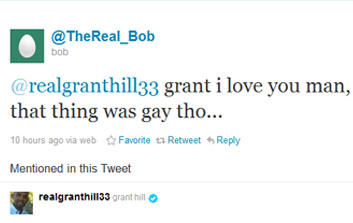 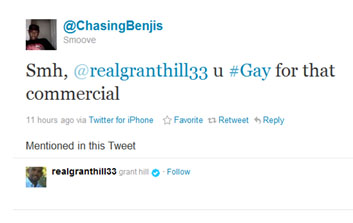 Hill went on a re-tweeting binge after the PSA aired during last night’s Bulls-Heat game.  He only re-tweeted a sampling of the ignorant remarks that were made, but the message is pretty clear.

People don’t get it.

But the NBA is slowly trying to change perceptions.  This PSA is a first.  The topic of homosexuality is taboo in professional sports.  But the NBA is starting to attack homophobia.  Maybe its hand was forced because of Kobe Bryant’s slur.  But the reason why doesn’t matter.  All that matters is that it is.

And its probably no coincidence that the New York Times ran its story on Suns President and CEO Rick Welts yesterday… in which he announced he is gay.

“This is one of the last industries where the subject is off limits,” said Mr. Welts, who stands now as a true rarity, a man prominently employed in professional men’s team sports, willing to declare his homosexuality. “Nobody’s comfortable in engaging in a conversation.”

This is a big step.  Not as big as a current player standing up and announcing he’s gay, but it’s a big step nonetheless.  Welts is a big name in the NBA.  He created All-Star weekend.  He as run a pretty successful franchise in Phoenix.  He’s a power broker in sports.  He’s one that just happens to be homosexual.

The goal for Welts is, first, to feel like a regular person.  And second, to prove to everyone that being gay isn’t an issue in sports.  That second part might take a little while, but this is a start.  It’s a credit to the NBA that there are plenty of people with the right attitude about it.  Steve Nash’s reaction to being told is one example:

“I just think it’s a shame, for all the obvious reasons, that this is a leap that he has to take,” Mr. Nash said.

With a spectacular view of Paradise Valley before them, the two basketball men talked about a topic rarely discussed in their work world. Mr. Welts asked for Mr. Nash’s support, and the ballplayer, honored by the request, said yes. Of course.

The wheels of change are starting to move.  Ultimately, the homosexual cause needs a hero that excels on the court, much like when leagues integrated racially.  For perceptions to really change, sports needs to see an established star come out and say “I’m gay”.  Then that player can’t be frozen out, or torn apart in the locker room.  Until then, little things like this will chip away at the unfortunate wall of silence that has been built.