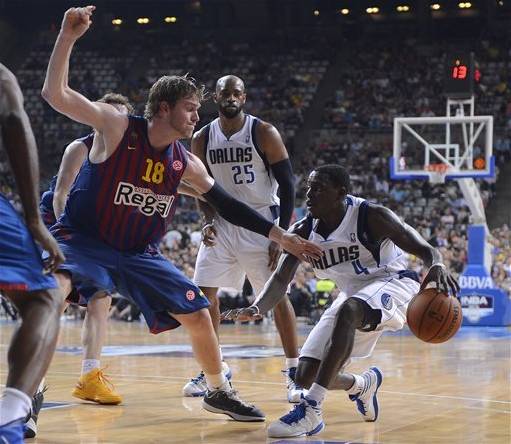 The 1992 Dream Team was not just a team hell bent on the return of basketball dominance to its rightful owners. They were playing "Johnny Appleseed," sowing the dreams of David Stern's European expansion into the fabric of the countries who witnessed their Sherman's March to gold.

It has been 20 years, and it is just about time for those dreams to bear fruit.  But, the branches are bare.

Regardless of how uncomfortable the idea made fans who believe 30 teams was enough — and regardless of how inconceivable it might be to have a team in a time zone six hours ahead of the Eastern US — Stern was going to add the London Abbeys to the NBA.

But that idea seems to have fizzled along with the international economy and the lack of NBA-worthy venues overseas. What Stern realized is that many of the arenas that house Euroleague teams are not up to NBA standards.

The Dream Team did a wonderful job of making a generation of children fall in love with basketball. The sport has even surpassed soccer's popularity in some countries. But the inner-workings of these societies and government are much, much different than those in the United States. And David Stern cannot befriend or bully his way into arena deals like he can in the United States.

Couple that with the absolute financial collapse of half the world's economy, and the result is an atmosphere that is still nowhere close to palatable for the NBA to create multiple European teams to compete along side the rest of the league.  Never mind the logistical nightmare of a Berlin team's west coast road trip. How is traveling nine time zones for games really fair? Even that idea is far fetched. Getting Europe to a place where the NBA can operate as it does in the United States is a daunting task at best. Laws, attitudes, and philosophies are just so radically different. So we can pretend that the NBA was close to adding the "London Abbeys" just because they had a name, but it was never really close enough.

And at this rate, I am not even sure Kyrie Irving's grandson will have a chance to play for an NBA team in Europe. Yes, the NBA is global, but it is global because of the Internet and the social media explosion. If we had to fly from Rome to Indianapolis to argue whether Roy Hibbert's contract makes sense, it would be a much different story. The reality of logistics simply trumps the dream, even if the dream had a name.