Our series on the four jerseys fans of every NBA team continues today.  It’s Central Division week, and today we’re focusing on the Milwaukee Bucks.  Remember, we’re not just going to list off four popular players in team history.  We know that when you’re wearing a jersey, you’re going for a “look.”  So every day we’re going to tell you the jersey you’ve got to have, the jersey you can’t go wrong with (in case you can’t find the first one), the jersey that will make people say “Oh, that’s awesome,” and the joke jersey that will have everyone laughing.

This has been the most difficult team so far.  The Bucks started in the NBA as an exapansion franchise, blew up overnight with the addition of two of the greatest players ever, had a long stretch of success under Don Nelson, another stretch of success under George Karl, but only one title during the infancy of the franchise to show for it.  Few of its marquee player have lasted their full careers in Milwaukee, which always makes it tough to choose because some people can’t let go of hard feelings.

But after a lot of debate, we’ve come up with four jerseys that will work well on the streets of Milwaukee.

Sidney Moncrief — Milwaukee loves Sidney and Sidney loves Milwaukee right back.  The 5th pick in the 1979 draft, Moncrief not only won the first two defensive player of the year awards ever handed out, he’s also Milwaukee’s second all-time leading scorer.  The Bucks were a playoff team in every one of Sydney’s seasons in Milwaukee.  Moncrief may be one of the most underrated stars in NBA history, but we know what he means to Milwaukee. If a Bucks fan owns any jersey in the world, it should be Sid the Squid’s #4

You can’t go wrong with:

Marques Johnson — He might be one of the Bucks’ forgotten stars.  Johnson was the league’s first “point forward” and he was once the NBA’s third leading scorer.  Check out the numbers for yourself and prepare to be amazed at how awesome he was in Milwaukee.  And to top it all off, he delivered one of the memorable line as Raymond in White Men Can’t Jump:  “nah nah… f— this… both you motherf—- are crazy.  I’m going to my car… get my other gun… shoot everybody’s ass.”  (or, perhaps, you prefer the “now you robbing me” scene?  Both have NSFW language).  You absolutely can’t go wrong with a #8 in your collection. 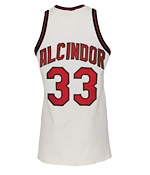 Lew Alcindor — Before he converted to Islam, became Kareem Abdul-Jabbar, and demanded to be traded to either New York or LA so he can be more culturally fulfilled, Lew Alcindor was the man who turned the expansion Bucks into an early force.  His last day as Lew Alcindor was the day he held up Milwaukee’s only championship trophy.  This was a tough choice, because Kareem left on a bit of a bitter note.  But Lew Alcindor did not.  Besides, he’s still Milwaukee’s all time leading scorer and rebounder.  Rock this particular #33 with pride.

Julius Erving — This might have been our most agonizing choice of all the jerseys.  In the end, we’re going a little outside the box.  The thing is, Dr. J was was originally drafted by the Bucks, but he never played for them.  Had he actually gone to the Bucks, Milwaukee would have had Kareem, Big O, AND Dr. J all on the same squad.  You talk about a “Big 3.”  Alas, it never happened, and J went on to a moderately successful career elsewhere.  But you can custom make a Bucks #6 “Erving” Jersey, and get a few laughs when you tell the story and hope that Dr. J may still someday accept that he should have been a Buck.

There you have it.  The four jerseys Bucks fans have got to have.  Disagree with us?  Let us know who we missed in the comments.

Next Week: The Southeast Division