Our series on the four jerseys fans of every NBA team continues today.  It’s Atlantic Division week, and today we’re focusing on the Philadelphia 76ers.  Remember, we’re not just going to list off four popular players in team history.  We know that when you’re wearing a jersey, you’re going for a “look.”  So every day we’re going to tell you the jersey you’ve got to have, the jersey you can’t go wrong with (in case you can’t find the first one), the jersey that will make people say “Oh, that’s awesome,” and the joke jersey that will have everyone laughing.

Oh, Toronto.  You have such a… what shall we call it?… less than stellar history when it comes to players.  The absolute best players the franchise has seen have all left town, which has left a bad taste in the mouths of Raps fans.  Would any self-respecting Raptors fan walk anywhere with a Vince Carter jersey on?  Even for a laugh?  What about Tracy McGrady?  Or Chris Bosh?

No, you wouldn’t.  They have spurned the team and city and you simply won’t stand to support them anymore.  It’s like keeping pictures of your ex-girlfriends up on the mantle after they break up with you.  Sure, maybe there’s a fond memory or two with her, but you just can’t stand the way she left you for someone else.

This means we have to look elsewhere for the jerseys true Raptors fans can rock with pride.

Morris Peterson — Dependable and deadly from the outside, Mo Pete’s departure came as his production started to decline, and the Raps went a different way in one of their many rebuilding efforts.  At his best, though, Peterson was a very good second option on offense and a tough perimeter defender.  A stalwart of a franchise that has struggled makes him a “Gotta Have” in my eyes.  But if you’re still not convinced, then this play against the Wizards should put you over the top.  There’s no doubt a #24 is a must-have for any Raps fan after that heads-up play alone.

You Can’t Go Wrong With:

Antonio Davis— His time in Toronto was brief, but he’s another one of the “good guys” who demands respect.  A hard-nosed scorer and rebounder, Davis was an All-Star for the Raptors in 2001.  Unlike most players who depart Toronto, Davis made one last stop in Toronto in 2006 before a career-ending back injury.  Another good warrior, you simply can’t go wrong with a #33 jersey in Toronto. 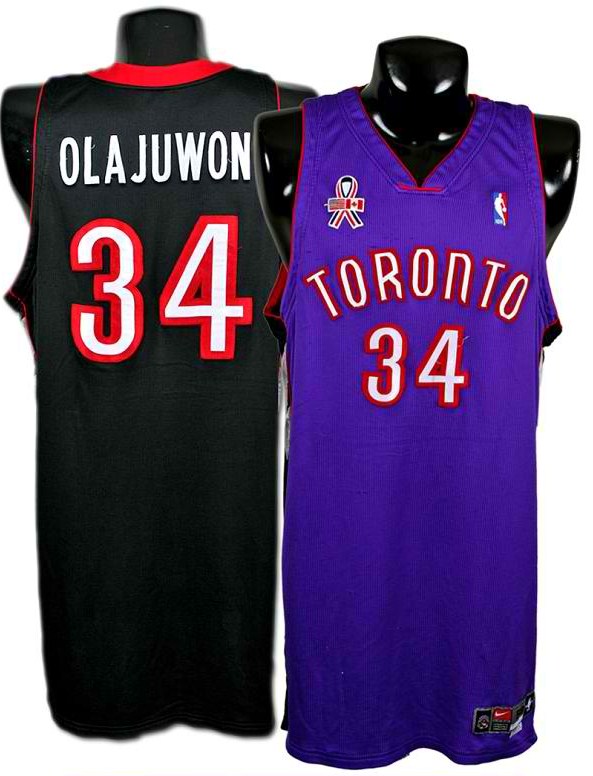 Hakeem Olajuwon — We all know “Dream” always is, was and will be a Houston Rocket.  But a lot of people forget that he spent a season playing in Toronto.  One of the greatest centers the game we will ever see last wore a Raptors jersey.  And as much as Houston fans might want to forget that, you won’t let them, will you, Raps fan?  No, you won’t.  And you shouldn’t.  Because when a player as awesome as “Dream” plays for your franchise, you damn well know that it will be an awesome jersey for you to wear around forever.

Oliver Miller —  Call it the “Eddy Curry corollary”… a.k.a. “point and laugh at the fat guy.”  Miller had a brief stint of playing at a fairly acceptable weight while he was in Phoenix.  By the time he came to Toronto, he was making seismologists scratch their heads on game nights.  He wore the #30, but he could have worn the #3000 if he wanted to by the end.  Miller is not only a great joke jersey to wear, you get bonus points if you get mistaken for him while you wear it.

There you have it.  The four jerseys Raptors fans have got to have.  Disagree with us?  Let us know who we missed in the comments.

Next week:  The Central Division