Our series on the four jerseys fans of every NBA team continues today.  It’s Central Division week, and today we’re focusing on the Detroit Pistons.  Remember, we’re not just going to list off four popular players in team history.  We know that when you’re wearing a jersey, you’re going for a “look.”  So every day we’re going to tell you the jersey you’ve got to have, the jersey you can’t go wrong with (in case you can’t find the first one), the jersey that will make people say “Oh, that’s awesome,” and the joke jersey that will have everyone laughing.

The Pistons are a team whose roots are longer than the NBA’s.  The Fort Wayne Pistons were a BAA Franchise prior to the merger that led to the NBA.  With a history that dates back to a time where the world was only really just cleaning up from World War II, there is a tremendous selection of players from which to choose just four jerseys.  But here we have a selection that we feel embraces the history and the glory years well.

Isiah Thomas — From the outside, this seems debatable.  But from the inside, this is a no brainer.  Don’t focus on the debacle Isiah Thomas has become.  Focus on the sublime talent that Isiah Thomas was when #11 was lighting fools up on the court.  As a player, few people could stick with Zeke on the floor.  Often the smallest guy on the court, he was quite simply the biggest reason why the “Bad Boys” won both of their titles.  True, they had a great team, but Isiah was THE man.  A legend this big is a “Gotta Have” on any team.

You Can’t Go Wrong With:

Joe Dumars — Dumars was one of the few genuinely likable guys on the “Bad Boys” Pistons teams.  He’s so nice, the league named its sportsmanship trophy after him.  But he was also one hell of a player (which you sort of need to be to get into the Hall of Fame).  But for all his great statistics, it was his defense, specifically on Michael Jordan, that became Joe D’s claim to fame.  This iconic SI cover says it all.  You’ll get people’s heads nodding in approval if you’re walking around Detroit with a #4 jersey. 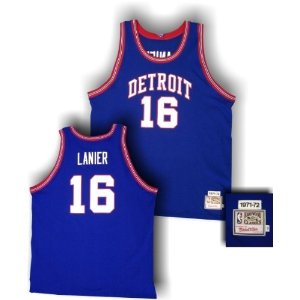 Bob Lanier — You can’t just rock “Bad Boy” Pistons jerseys if you’re a true fan.  You’ve got to reach back a little and show your knowledge of history.  And one of the coolest cats to call the motor city home was Bob Lanier.  And it’s yet another Hall of Fame jersey to add to your collection, meaning Lanier was known for more than just his gigantic feet and his Miller Lite ads (including this one with a joke about his feet).  Lanier wasn’t just a 20/10 guy for the Pistons, he was once a 25/14 guy.  He might be one of the most overlooked centers when we talk about all-time greats, but you can’t overlook him when you’re putting this collection together.  Put that #16 on with pride and bask in the glory that will come your way as people congratulate you for your great taste (hey, Miller Lite pun!)

Darko Milicic — Yes, this one was obvious.  Darko was billed as a European phenom, but he was one of the NBA’s biggest draft busts ever.  The players drafted after him (he went second) reads like an all-star team:  Carmelo Anthony, Chris Bosh, Dwyane Wade & David West to name a few.  But if you can’t laugh at yourself, then who can you laugh at?  Tell the world that you are still waiting for Darko to come through and prove he was worthy of that pick.  And show your fellow Pistons fans that you can shrug off the fact that he never will be by embracing the hilarious side of that disaster.  Don your #31, hit the bars, get a few laughs, and maybe a few free pity drinks.

There you have it.  The four jerseys Pistons fans have got to have.  Disagree with us?  Let us know who we missed in the comments.