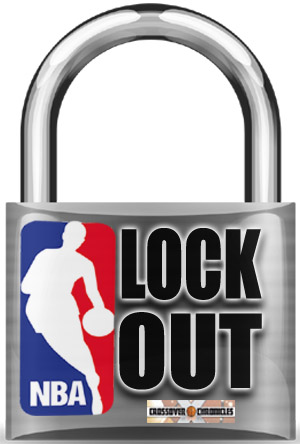 So where were you when the NBA players rejected the offer made by then NBA owners for the current CBA?  I am lucky enough to say that I was at work when it was rejected.  Other than the fact that I can’t follow my home team playing NBA games, I’m not really feeling any ripples in my daily life.

How many in the NBA work force can actually say that?  Our country is going through one of the worst economic times that it has seen in ages, and we have sat and watched millionaires and billionaires fight over how to share the wealth for what feels like an eternity.

I’m fairly certain that if I own a business near an arena that sees 43 home NBA games a year, I’m not too happy right now.  If I’m that guy who usually gives you your voucher so you can park in that parking deck, I’m not happy.  If I am the guy walking up and down the stairs in the arena to sell you some popcorn or a pizza, I am not happy.

Know why I’m not happy?  It’s because I’m unemployed.  Due to no home games in my home arena, the company that usually has me working all of the games went ahead and permanently laid me off.  I don’t have a job now.  It goes further than that though.  All of those folks who call the local fans that support the team and have season tickets no longer are needed.  Sure, they can stay on for a while and man the phones as angry fans that bought tickets call to rant about how they can’t wait to get their money back…but once the calls stop…why do they need to be there?  They will be without work.

Let’s go even further, shall we?  How about the local hotels and everyone employed there.  Well, those high-end rooms are not being booked for multiple nights, while the away team is in town.  No need to make those additional beds.  Actually, no hotel tax is being paid in to the city either.  Those players that are on your home team will not have to pay income tax to your state because they aren’t getting paid at all.  Ouch!  We have now touched everyone from the blue-collar worker, to the white-collar worker, and even the government.  Our state is going to lose revenue because of this lockout.  Is that ripple hit your shoreline yet?

This lockout and the rejection of a deal was a pebble that was thrown at the end of the last game of the NBA finals.  Within a few weeks of those finals, talks should have begun.  Supposedly, there were discussions on a new CBA during the All-Star breaks over the past 2 years (at least).  If that was the case, did anyone take notes?

Did anyone have something drawn up?  I ask that question because it seems like it took the players and owners a couple months to get together to “talk” seriously once the season ended.  Once the negotiations began, they were the most outrageous spectacle that I could have imagined.

I would have thought that you would have had main bullet points to cover, with sub-points, and you could have scheduled daily meetings over the course of weeks, with each day having a set number of hours to discuss each topic and to try and reach a resolution on it.  Instead we saw marathon sessions with no resolve whatsoever.  Just mud slinging and finger pointing until the worst could happen: lawsuits.

Could mediation prevail and stop the ripples?  Perhaps they could, but a federal mediator couldn’t get anything done, so what will be different now?  One thing is sure though.  Through proper planning, no pebble ever had to be thrown.

A CBA lasts 10 years.  That means that you have 10 years to discuss the next one.  You have ten years to get something set so that no pebble has to be cast.  No ripples have to be made.  1998-1999 was the first sign that these negotiations needed to take more time and careful planning.

Did they heed it?  No.   Are we seeing a ripple effect?  If the season gets cancelled, you might as well say that the players and owners got together and found the biggest boulder they could find and tossed it into the water.  Go ahead and call it a tidal wave.  I just hope it doesn’t wash everything away that has been built over the past 10 years, and I hope that the small business owner, and all the other recently unemployed can swim.