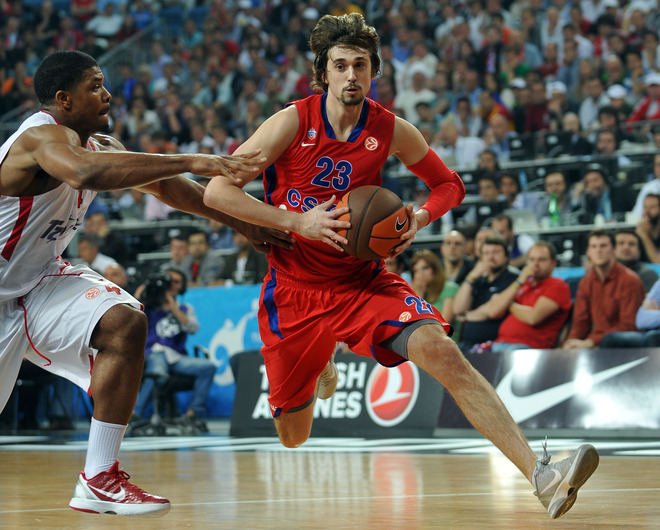 Andrei Kirilenko moved another step closer to a return to the NBA this past weekend, but by the time this long offseason and free agency frenzy is all said and done Kirilenko may not be the most coveted player fleeing CSKA Moscow.

Last weekend, new CSKA head coach Ettore Messina made it perfectly clear the writing on the wall that he faces with his new team in Russia. A sizeable portion of the roster he inherited is now NBA bound featuriing Kirilenko, Shved, Nenad Krstic, Ramunas Siskauskas and Andrey Vorontsevich.

The Brooklyn Nets and Kirilenko still have a shared interest in working toward a deal, but an expected contract extension between the Nets and free agent Gerald Wallace may have changed those plans significantly.

The Boston Celtics own the Bird Rights to Krstic.

Vorontsevich and the Oklahoma City Thunder have a reported verbal contact in place and Siskauskas — the 33-year-old 6-foot-6 swing guard — is on a few front office radars around the league.

And then there is Shved.

At 23-years old, the 6-foot-5 guard remains a target of Memphis, Cleveland and Minnesota, with Minneapolis perhaps being the final destination for Shved. With free agency officially under way it will be interesting to see how those negotiations ramp up in the coming weeks, particularly from Minnesota’s side of the table.

As has been the case, they appear to be the lead team in the chase for Shved.

A number of teams have kept close tabs on him during the last few months (Atlanta and Oklahoma City were also believed to have shown previous interest) thanks to his play at the Euroleague Final Four against Panathinaikos — where Shved finished with 15 points and 5 rebounds in 19 minutes off of the bench — before dropping a heart breaker to Olympiacos in the finals.

CSKA closed out its season by beating Khimky at the Russian League finals, and since then the attention has shifted back to picturing how Shved fits in the NBA and with which team.

The scouting report: offensively, his game is sound. Shved is both versatile and athletic and a guard who can shoot from the perimeter and can get into the paint. The trouble is defensively and being able to handle stronger, faster NBA guards. His overall game would excel in an up-tempo offense and at this juncture in his career, a reserve role fits him perfectly — a guy who provide some energy and scoring spark in a second-unit.

On the season, Shved led CSKA in scoring in Russian League play with 11.6 points. 3.3 assists and 3 rebounds per game, while shooting 50 percent from the field and 39 percent from 3-point. He kept those numbers consistent both in the VTB United League (10.7 ppg, 2 apg., 2.2 rpg) and Euroleague competition (10.6 ppg, 3 apg, 2.6 rpg) and was really the motor behind CSKA’s starting five.

But what about the money?

At this point, Shved is still under contract with CSKA but it is clear he is making the NBA jump this summer and they will not prevent him from following his hoop dreams. There were wild reports back in May that his reps were asking upwards of $10-$12 million on a three-year deal, both a number of contacts affiliated with or close to CSKA’s organization deny to Crossover Chronicles that is simply not the case.

What matters most to Shved — who is currently playing with the Russian National Team in attempting to qualify for the 2012 Olympics in London — isn’t the monetary return as much as finding the right fit and role with an NBA team.