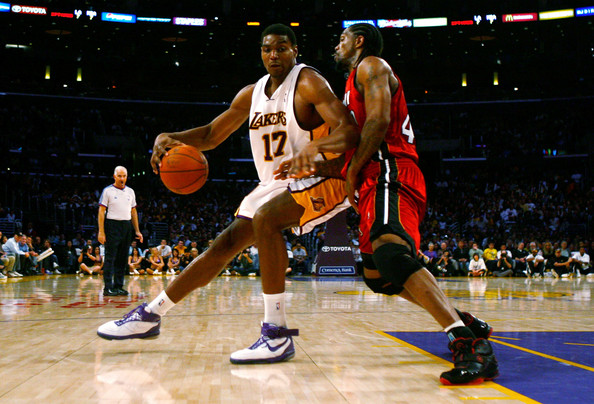 Philadelphia 76ers training camp opened to some bad, yet not totally unexpected news.

Andrew Bynum will miss three weeks with "knee discomfort." He will not miss any time in the regular season and so the new-look Sixers will not be without their now star center. Knee injuries have plagued Bynum throughout his career. It knocked him out of the 2008 Finals and for much of the 2008 and 2011 seasons. It has been frustrating for the promising center, who many believe is the second best center in the league.

Bynum, trying to make his knees healthier long term, went to Germany and had the same blood-spinning procedure that his former teammate Kobe Bryant had. Something was not right as Bynum worked out and so he and Philadelphia have put him on the shelf for a while.

This is not the way Bynum wanted to start his first season in Philadelphia with the weight of the team squarely on his shoulders. But it might be the safest way for him to proceed, as he told Philly.com:

I was working out and kind of told them I was feeling uncomfortable, and they said take time to let the procedure work. It's definitely disappointing, and I want to be out there playing.

If there is one thing Doug Collins is good at, it is keeping his teams flexible and malleable. He will have his team ready to play and ready to play hard.

But this team is different. It should rely more on Bynum and lesso n the flexibility and balance that characterized the 76ers of the last two years. This is not a team of seven or eight potential starters. There are more weaknesses. Jason Richardson has struggled the last two years in Orlando. Nick Young has been stuck in the me-first culture of the Wizards and showed only flashes (read: Game One of the Playoffs) in his short stint with the Clippers. Those are the top two shooting guards for Philadelphia. Put them together, and it is hard to argue that they are better than Andre Iguodala and Lou Williams, both gone from this year's team.

Bynum is the centerpiece of this team now and Philadelphia is relying on him to be healthy and ready to contribute. That obviously is easier said than done. In his career, Bynum has played all 82 games just once. He has played 70 games (or its equivalent) only twice. He played in 60 games last year and seemed to make that next stride while playing in Kobe Bryant's shadow.

Now that he has his own team and the chance to be its focal point, he is relying on his body even more. And so are his team.

This is certainly unwelcome news for both, even if it does not reach the regular season.

Will Andrew Bynum be able to carry the 76ers on his troublesome knees? Let us know in the comments below or on Twitter by using the hashtag #SixersDay.