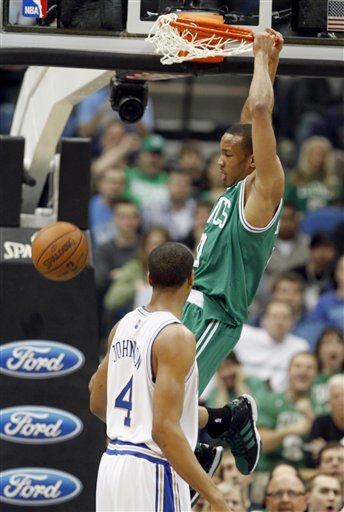 Sometimes, the worst thing that happens is the best thing that can happen. You might not know it at the time, but that negative thing that has gotten you all worked up might just present an opportunity that you never knew existed.

The Boston Celtics, like many other teams, have been dealing with injuries. Just since the All-Star break, the Celtics have lost Chris Wilcox to a heart ailment, Ray Allen to an ankle injury and Mickael Pietrus to a concussion. They also learned that starting center Jermaine O’Neal would miss the rest of the regular season to have his injured wrist surgically repaired.

For an old team with trouble with its bench, that should have probably been the death knell. Instead, it has forced Doc Rivers to make a pair of lineup tweaks that have rejuvenated the Celtics.

The first tweak was Kevin Garnett moving into the center position. With Jermaine O’Neal and Chris Wilcox both out, Rivers was forced to slide Garnett over to the center spot. All he has done since moving there was thrive, averaging 17.6 points and 8.8 rebounds, and amassing nine of his 17 double-doubles on the season. All three of his 20/10 games this season have come since moving to center.

With KG starting at center, Brandon Bass has stepped into the starting power forward role, giving the Celtics two guys who can spread the floor. Perhaps it is no coincidence that Rajon Rondo has been an assist machine since the move. With more room to maneuver, and with two guys who can hit mid-range shots, Rondo has put up 12.9 assists per game in March and has only had two single-digit assist games since the All-Star break.

Another reason Rondo is getting more assists come from the second tweak: Avery Bradley starting in the same backcourt. With Ray Allen and Mickael Pietrus both out, Bradley has become the only other option to start at the two, and he has been doing work. Bradley has started the last five games for Boston, and the team has not-so-coincidentally given up 80.8 points per game in that stretch. The Bradley/Rondo tandem is forcing more turnovers and getting the Celtics to play a faster-paced style, leading to better starts and easier baskets for Boston. The Celtics have won 11 of the 15 games Bradley has started this season.

The Boston Celtics have been among the NBA’s best teams since the All-Star break, going 15-5 and moving into first place in the Atlantic Division (they now lead the Sixers by a game). The Celtics now trail the Orlando Magic by a game and a half for the third seed in the East.

They have a tough stretch coming up, though, with games against the San Antonio Spurs, Chicago Bulls, Indiana Pacers, Philadelphia 76ers, Miami Heat (whom they walloped last night and will surely be looking for revenge), and the Atlanta Hawks all in the next eight days.

Can the Celtics continue their run of success in that stretch?  It will be tough, but this is a different team than the slow, plodding, turnover-prone bunch that started the season.  And it was the worst of circumstances, key injuries hitting some big-minute guys, that created a line up that might help the Celtics not only survive, but actually make one last run with this group of guys.