Winning is not typically associated with the Clippers. The franchise has an overall winning percentage of .367 and has eight total playoff appearances — which includes its time in Buffalo and San Diego. The Clippers have made back-to-back playoff appearances just once in 27 years in Los Angeles.

Where the Clippers are right now is very uncharted territory.

Things have changed for the Clippers. Chris Paul wanted to come to the Clippers after the trade with the Lakers fell through and played superbly alongside Blake Griffin, almost singlehandedly lifting that team beyond its typical losing ways. He told GQ he wanted to change the Clippers.

That is all well and good from a public relations perspective. That is what he is supposed to say.

Actually doing it will be the part that takes work. And so far, it certainly seems that the Clippers will make that second consecutive trip to the Playoffs. More and more free agent stars are looking to join the party and help lift this franchise from the depths. The allure of Blake Griffin and Chris Paul on a trendy team in Los Angeles. What more could people want?

So veterans like Grant Hill, Jamal Crawford and Lamar Odom are chasing their championships and picking the Clippers to do so. This would have been unthinkable before Griffin emerged and Paul joined the club.

Two years does not a winning franchise make however. Everyone is still waiting for the other shoe to drop. 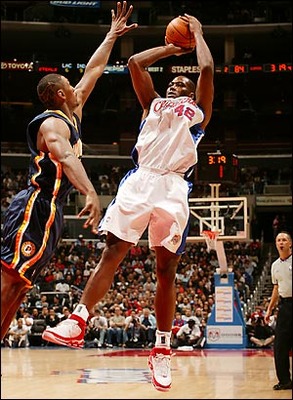 The last time the Clippers made the playoffs, it seemed the franchise had a sustainable winning formula. Elton Brand was one of the best and most consistent post players in the league and anchored a tough team with size and athleticism. Sam Cassell, Cuttino Mobley and Chris Kaman were solid players and Shaun Livingston was a solid contributor. This was a team that had some opportunity and a chance to improve.

The following season came disaster. Livingston suffered his gruesome knee injury that ripped his potential away from him. Brand had a strong season the following year, but ruptured his Achilles and played in only eight games in 2008. Cassell's age finally caught up to him and his career was winding toward its end.

In other words, the other foot dropped. Brand left for Philadelphia after the team brought in Baron Davis to pair up with him and the whole plan seemed to collapse. it felt like the old Clippers again. This does not get into the off-the-court mess with Donald Sterling and Elgin Baylor.

So excuse the skepticism when it comes to believing something calamitous will not happen this year.

Blake Griffin is coming off of a torn meniscus that kept him out of the Olympics this year. Chris Paul has a history of nagging injuries and faced another one after the Olympics. So, again, excuse the skepticism a bit.

Consistency is the key to building a winning franchise. One year of success is nice. But to compete for a championship, you have to be able to compete every night and every game. And come back and do it again with the target on your back.

Chris Paul certainly knows that feeling and has the killer instinct and leadership to push the team toward that winning consistency. So too does Chauncey Billups. Even his presence on the bench is a plus for this team. The addition of all the veterans hunting for a championship, provided they can produce, should write the promise of another playoff season and another trip deep into the postseason.

The Clippers seem to be set up to win again this year. The trip into uncharted territory continues for L.A.'s other team.

Can the Clipper becoming a winning franchise? What steps are left? Join the discussion in the comments below or on Twitter by using the hashtag #ClippersDay.