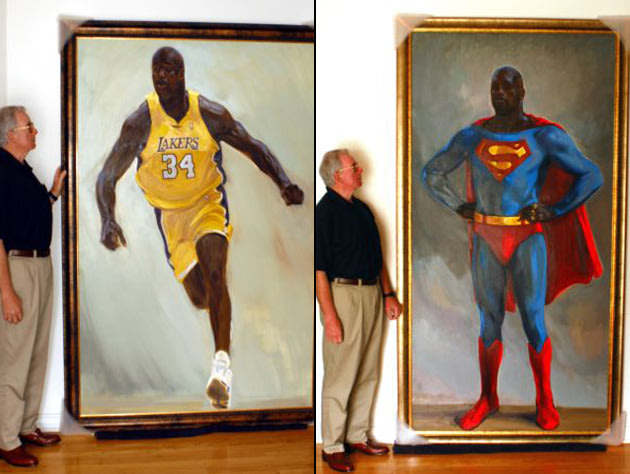 Athletes are well known for their interesting purchases and vision of themselves. It is a different culture. When you have millions of dollars and everyone has told you how great you are for your entire life, you might have a pretty big ego and might want to show it off some.

That is how bizarre artwork and stories about large spending sprees happen so often.

It also inspires some fan art and fan idolization. We are all at the beck and call of athletes sometimes and willing to live and die on the actions of complete strangers just because of their athletic gifts.

I do not know how these paintings were commissioned — it could have been from the player or from the athlete. But if you are in the market for some glorified oil paintings of one Shaquille O'Neal, this will be the post for you.

On Wednesday, Ball Don't Lie and several other blogs stumbled across a Los Angeles Craig's List ad trying to sell two oil paintings of Shaquille O'Neal, one in a Lakers jersey and another in full Superman regalia. The ad offered those in the Newport Beach, Calif., area the chance to purchase these two paintings for the low, low price of $3,995. The poster claims that the paintings were drawn by an anonymous, but famous, Polish artist and is part of a liquidation of the poster's sports art collection. The poster claims the paintings are valued at $100,000 each and they come with a coffee table book dedicated to O'Neal.

How could you pass that up?

They are quite impressive as far as paintings go. They seem like much more than fan art. This is some high quality artwork. And it looks pretty lifesize. Who wouldn't want a life-sized Shaq in your house somewhere (I regret throwing out my cardbooard cutout of O'Neal in that fit of rage when he left Orlando in 1996)?

This is your chance to get back into the game. And what a good time too.

The Lakers announced O'Neal will have his No. 34 retired and added to the list of greatest Lakers in a ceremony slated for April 2. Hopefully by then you will have a new wing to your NBA art museum.